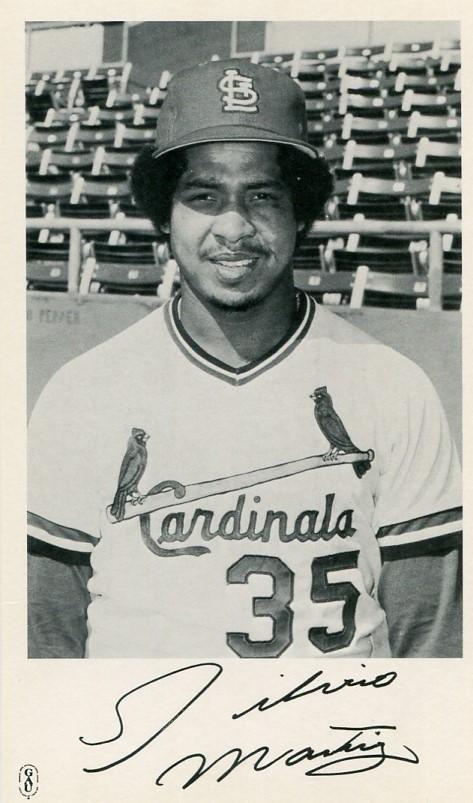 Already the author of both a pair of one-hitters and two-hitters in his fledgling career, Silvio Martinez of the St. Louis Cardinals came within four outs of a no-hitter against the high-flying Montreal Expos on June 27, 1979, at Busch Stadium.

Backup catcher Duffy Dyer, with a lifetime .232 batting average entering the 1979 season, kept Martinez from immortality with a check-swing bloop single to shallow right field on a 1-and-2 slider over the outside corner. Martinez then retired the next four batters, Chris Speier (strikeout), Tom Hutton (comebacker), Warren Cromartie (groundout to second base), and Rodney Scott (lineout to second).

“It’s OK,” said the diminutive 23-year-old Martinez, who acknowledged having all five of his pitches (fastball, curve, slider, changeup, forkball) working effectively. “I never think I’m going to throw a no-hitter. I’m thinking about wanting to win, that’s all.”1

Martinez struck out seven and did not walk anyone while facing 29 batters. He set down 13 Expos on groundouts, including nine to second baseman Mike Phillips. Martinez pitched his second straight complete game,2 improved his record to 6-2, and dropped his ERA to 2.62, third best in the National League. The 2-hour 10-minute game was played before 14,864 fans.

“He had it right there tonight,” Cardinals pitching coach Claude Osteen said. “Right there on the edge.”3

The Expos came into the Wednesday evening finale of a three-game series with a 42-25 record and a six-game lead over the Pittsburgh Pirates in the NL East Division. Meanwhile, the Cardinals had lost 10 of their last 12 games, including the first two to the Expos, 8-2 and 5-3. They had fallen into a fourth-place tie in the NL East, 7½ games out with a 34-32-1 record.

Dyer, who was in the lineup to give regular starter Gary Carter a day off, struck out and grounded out to second in his first two at-bats against Martinez. “It was a good pitch … the best pitch he threw me all night,” Dyer said of the pivotal offering. “I’d made up my mind I wasn’t gonna strike out. I wanted to hit it up the middle. But luckily, I just got a piece of it and hit it where somebody wasn’t.

“I’ll bet [Martinez] threw 80 percent breaking balls. … He must have had a lot of confidence in it. I couldn’t believe how many breaking pitches he threw with 3-and-1 and 3-and-2 counts.”4

Besides Dyer —who had the lone hit in a one-hitter by Larry Dierker of the Houston Astros in 1972 —the only batter to reach base against Martinez was Andre Dawson in the first when Cardinals left fielder Lou Brock dropped a fly ball for a two-base error. Brock atoned for the miscue with a running catch in left-center to take a hit away from Cromartie to end the sixth. Dawson nearly beat out a groundball to shortstop with one out in the seventh, but Garry Templeton’s throw from the hole nabbed him. Third baseman Ken Reitz, who entered the game in the eighth for defense, snuffed a hard-hit bouncer by Larry Parrish immediately before Dyer’s hit.

After Martinez retired Tony Solaita to end the seventh, Cardinals catcher Terry Kennedy thought his batterymate had “a legitimate shot” at a no-hitter. “We had two strikes on Dyer,” said Kennedy, starting his first game since being recalled from the Cardinals’ Triple-A farm club in Springfield, Illinois. “I made the call. He just stuck his bat out and got a hit. You can’t second-guess it. … It would really have been something catching a no-hitter. I would have gone berserko. I never would have used that glove again if he’d done it. But a shutout and a one-hitter ain’t … too … bad.”5

St. Louis jumped on Montreal ace Steve Rogers (7-4, 2.47 ERA, second best in the NL) for four runs in the first two innings. Templeton led off the first with a single to left, stole second base, and scored on a two-out single to left by Dane Iorg. In the second, Ken Oberkfell and Phillips singled leading off and, after Martinez popped out, Templeton reached on an infield hit to load the bases. Brock drove in two runs with a single to right, and Tony Scott followed with an RBI infield hit to shortstop. George Hendrick capped the scoring in the seventh with a pinch-hit single off Rudy May that plated Brock, who had been hit by a pitch, stolen second, and advanced to third on a passed ball. All eight of the Cardinals’ hits in the game were singles.

The 5-foot-10, 170-pound Martinez was acquired by the Cardinals on November 28, 1977, as one of two players to be named later from the Chicago White Sox in a trade for pitcher Clay Carroll.6 Martinez enjoyed the best season of what ended up being an injury-shortened career in 1979, going 15-8 with a 3.27 ERA. He developed elbow problems a year later and mustered merely a 7-15 record over the 1980 and 1981 seasons. Martinez pitched one more low-hit gem, a three-hitter against the Chicago Cubs on April 23, 1980, at Wrigley Field. On November 20, 1981, he was traded to the Cleveland Indians with pitcher Lary Sorensen as part of a three-team deal involving the Philadelphia Phillies that brought outfielder Lonnie Smith to St. Louis. However, Martinez never pitched in the major leagues again, finishing with a 31-32 record and a 3.88 ERA in 107 games, including 87 starts, spanning five seasons.

Martinez’s other low-hit games all came during the 1978 season. He was recalled by the Cardinals from Springfield after pitching a no-hitter against the Omaha Royals on May 26. Four days later, making his first big-league start, he pitched a one-hitter against the New York Mets at New York’s Shea Stadium, allowing a home run to Steve Henderson leading off the seventh. Martinez orchestrated another one-hit effort on July 8 against Pittsburgh in St. Louis, surrendering a single to Omar Moreno with one out in the first. In those games, Martinez walked six and seven batters, respectively. He subsequently added a couple of two-hitters —July 26 at San Francisco and September 25 back in New York.

Martinez is one of three Cardinals pitchers to twirl two one-hitters in a season. The others were Bill Doak in 1922 and Mort Cooper in 1943. Martinez and Doak share the franchise record with three career one-hitters.7

After dropping the first game of a doubleheader to the Cubs on August 5, 1979, the Cardinals were a game below the .500 mark at 52-53-1. But an ensuing seven-game winning streak propelled them to a 34-23 record in their final 57 games for an 86-76 record and third place in the NL East, 12 games behind the eventual World Series champion Pirates. Montreal wound up second at 95-65.

2 On June 22, 1979, Martinez pitched a complete game against the New York Mets, allowing one earned run on seven hits with two walks and four strikeouts in a 4-2 win.

6 The Cardinals also received pitcher Dave Hamilton to complete the deal made on August 31, 1977.