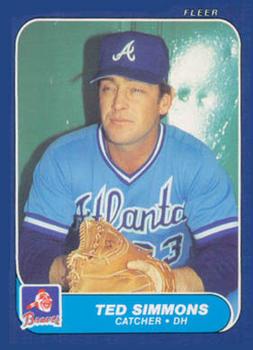 The Atlanta Braves fortified their bench in 1986 with a spring-training trade for Ted Simmons. As the Braves remained in contention in May and June, Simmons boosted morale among his fellow reserves, dubbed the “Bomb Squad.” He also wielded a still-vital bat in the 19th season of his Hall of Fame career, capping a bench-driven seven-run sixth-inning comeback with a pinch-hit grand slam in Atlanta’s 8-5 win over the Pittsburgh Pirates on June 3 at Fulton County Stadium.

In December 1985 the Braves obtained Ozzie Virgil in a trade with the Philadelphia Phillies.1 The deal left Atlanta with three veteran catchers: Virgil, Bruce Benedict, and Rick Cerone. All were right-handed batters; outside of an emergency, none had ever played another position in the majors. 2

As Opening Day approached, the Braves returned to the trade market to address their catching surplus. Cerone and two minor leaguers went to the Milwaukee Brewers on March 5. Simmons, whose five-year tenure in Milwaukee had included a half-season division title, an American League pennant, and two All-Star Game selections, was Atlanta’s return.3

One of baseball’s top catchers for many years, first with the St. Louis Cardinals, then the Brewers, Simmons seldom worked behind the plate after 1983, serving more often as a designated hitter or corner infielder.4 The Braves valued the 36-year-old switch-hitter, an eight-time All-Star, for his versatility “as a third catcher, occasional starter at first base[,] and a prime pinch-hitter.”5 “The key is his ability to hit,” said Braves general manager Bobby Cox, back in Atlanta after managing the Toronto Blue Jays for four seasons.6 “He can still hit. … People talked about our bench being weak last year. It could be a big plus for us now.”7

Simmons joined a team in transition after finishing fifth in the NL West in 1985. In addition to hiring Cox away from the Blue Jays, owner Ted Turner brought in manager Chuck Tanner, who had piloted the Pirates to the 1979 World Series title but was let go after consecutive last-place finishes and an ownership change.8

As the Braves trained in Florida, Simmons emerged as the leader of their reserve corps, whose ranks also included Benedict; veterans Chris Chambliss, Omar Moreno, and Billy Sample; and rookie Andres Thomas.9 Simmons named them the “Bomb Squad”; by May they wore vintage leather aviator helmets, procured by Braves star Dale Murphy, and displayed a four-foot bomb, presumed a dud, in the locker room.10

The Simmons-sparked infusion of team spirit, along with Tanner’s characteristic optimism and good cheer, buoyed the Braves to their best stretch since they spent a week in first place two seasons earlier. They won 17 of 25 games between May 1 and May 27 to draw within 1½ games of the first-place Houston Astros.11 When the Pirates visited Atlanta for a three-game series in early June, the Braves were a competitive third behind Houston and the San Francisco Giants.

Simmons made a rare start at catcher in the series opener on June 2, but the Pirates stole four bases — three leading to runs — in a 9-2 win.12 He was back on the bench a night later, as a crowd of 10,649 and a national audience on WTBS, Turner’s superstation, watched.

The Pirates took an early lead when Lee Mazzilli tripled off Rick Mahler in the first and scored on Johnny Ray’s groundout. Shaky defense by Andres Thomas at short led to three more runs in the third. Pitcher Larry McWilliams singled. Barry Bonds, playing in his fifth major-league game after a promotion from Triple A a week earlier,13 hit a potential double-play grounder, but the ball went by Thomas and into center; it was scored a single.

Mazzilli followed with a bouncer to Thomas, who reacted slowly and missed the ball. McWilliams scored on the error, and Bonds took third. Ray, leading the league in hitting with a .359 average and back after missing three games with a hamstring injury,14 lined an opposite-field double down the left-field line. Bonds and Mazzilli came home, and the Pirates had a 4-0 lead.

McWilliams had debuted with the Braves in 1978, but his best seasons were in Pittsburgh in 1983 and 1984, after Atlanta pitching coach Johnny Sain revamped his delivery and repertoire and the Braves traded him to the Pirates for Pascual Perez.15 An injured shoulder sidetracked McWilliams in 1985,16 and he continued to struggle in 1986, carrying a 5.72 ERA into this game. But the 32-year-old left-hander had beaten the Braves six days earlier in Pittsburgh,17 and he contained his former teammates early in the rematch. Aided by two double plays, McWilliams held Atlanta scoreless through the third.

His success continued when Murphy fanned to begin the fourth, but Bob Horner — McWilliams’s fellow rookie on the 1978 Braves — homered to left-center for the Braves’ first run. McWilliams, however, finished the inning with ease and set down the Braves in order in the fifth. When Jim Morrison hit a home run to lead off the sixth, Pittsburgh again held a seemingly comfortable four-run lead.

McWilliams remained on the mound in the bottom of the sixth. He appeared in control when Sample grounded out, and even after Rafael Ramirez singled to center. Murphy worked the count full, then took ball four.

Horner batted with two on. McWilliams threw a forkball, low and away. Horner blooped it to the opposite field, inside the right-field line. Ramirez and Murphy scored, Horner had a double, and Pittsburgh’s lead was down to 5-3.

“Give [Horner] credit,” McWilliams said afterward.18 “He went out and got it. That’s why he is such a good hitter. I think he might have broken his bat, but he still got a good piece of the ball, and it was a nasty pitch.”19

Terry Harper drew a walk, but Pittsburgh recorded the second out when Rafael Belliard turned Thomas’s grounder to short into a force at second. Atlanta had runners at the corners, and Virgil due.

Jim Leyland, in his first season as a major-league manager, summoned right-hander Cecilio Guante to replace McWilliams. A regular in Pittsburgh’s bullpen since 1983, the 26-year-old Guante entered with a 2.27 ERA in 21 appearances.

Tanner went to his bench for Chambliss. The 37-year-old Chambliss had played more games at first than any other active player and received Most Valuable Player votes just four years earlier as part of Atlanta’s 1982 division champions, but since August 1984 he had become a part-timer.20 “Hey, I still don’t like pinch-hitting,” Chambliss said a day earlier.21 “People think that just because a veteran player begins to do well as a pinch-hitter that it means he’s finally accepted his role. Well, you never accept just pinch-hitting. You just come to the realization that you’re not going to play regularly anymore, and then you go from there.”22

Notwithstanding his feelings on the new role, Chambliss continued his excellent run, lining a double against Guante, his sixth pinch-hit in 16 at-bats so far in 1986. Horner scored, Thomas took third, and the deficit was just one run.

Righty-batting second baseman Glenn Hubbard was up next, but Tanner sent up lefty Ken Oberkfell to pinch-hit. Oberkfell walked, loading the bases.

It was now Mahler’s turn to bat, but Tanner tapped the Bomb Squad for a third straight pinch-hitter: Simmons.

Guante threw a fastball on the first pitch, and Simmons, batting left-handed, was primed for it. He pulled a line drive over the 12-foot fence in right for his ninth — and last — career grand slam.

“When I hit it, I knew it was a hit, but I wasn’t sure if it was high enough to go over the fence,” Simmons said.23 “I figured after Guante walked [Oberkfell], he’d try to get a strike on me. He threw a fastball over the plate, and I hooked it.”24

Simmons circled the bases with his fist raised in triumph. Tanner — his tactical deployment of the Bomb Squad an unqualified success — greeted Simmons at home with a two-handed “low five” and enthusiastic hug. The crowd demanded a curtain call; Simmons thrust his arm into the air.

“You could feel the electricity fly,” Tanner added.27

Atlanta had a seven-run inning and an 8-5 lead, and rookie left-hander Paul Assenmacher closed out Pittsburgh over the final three innings. With the Astros losing, the Braves now were just 2½ games out of first.

“It seems like those guys come off the bench every time and get a big hit,” said Mahler, who was credited with the win.28 “You get the feeling that when those guys come up in that situation, they’re going to get a hit.”29

The Braves hung around the divisional race for another month, until a slide of 20 losses in 25 games between July 4 and August 2 knocked them from contention. They finished with a 72-89 record and in last place. Simmons played three seasons in Atlanta, retiring in 1988 after 21 years in the major leagues.30

In addition to the Sources cited in the Notes, the author consulted the Baseball-Reference.com and Retrosheet.org websites for pertinent material and the box scores noted below. He also used game coverage from the Atlanta Constitution, Pittsburgh Post-Gazette, and Pittsburgh Press newspapers.

1 The Braves obtained Virgil, who played in 344 games over three seasons in Atlanta and made the 1987 NL All-Star team, and 19-year-old pitcher Pete Smith for Steve Bedrosian, who won the NL Cy Young Award in 1987, and Milt Thompson, whose 18.6 career Wins Above Replacement over 13 major-league seasons, as measured by Baseball-Reference.com, was the most of anyone involved in the trade. Gerry Fraley, “Braves Get Virgil for Bedrosian, Thompson,” Atlanta Constitution, December 11, 1985: 1-E.

2 Jesse Outlar, “Benedict Not Likely to Stay in Atlanta,” Atlanta Constitution, February 19, 1986: 1-D. Cerone had played one inning at third base for the Yankees in 1983.

4 The Brewers intended to use rookie Billy Jo Robidoux at first base in 1986 and move Cecil Cooper to designated hitter, making Simmons expendable. Fraley.

6 Cox, who managed the Braves to a 266-323 record from 1978 to 1981, returned to Atlanta after leading the Blue Jays to the AL East title in 1985. Back in the Braves dugout in 1990, Cox piloted the team to 14 consecutive division titles, four NL pennants, and the 1995 World Series championship. Fraley, “Simmons a Brave as Milwaukee Gets Cerone, Two Others”; Gerry Fraley, “Braves Place Cox in Charge,” Atlanta Constitution, October 23, 1985: 1-D.

7 Fraley, “Simmons a Brave as Milwaukee Gets Cerone, Two Others.”

13 Steve Halvonik, “Bonds Gets Pirates Baptism,” Pittsburgh Post-Gazette, May 31, 1986: 9. Official records credit Bonds with debuting in Pittsburgh’s April 20, 1986, game against the Chicago Cubs at Wrigley Field. On that date, Bonds was with the Triple-A Hawaii Islanders of the Pacific Coast League, but Pittsburgh’s game was suspended by darkness with the score tied in the 14th inning. With Bonds on the Pirates roster when the suspended game was resumed on August 11, he pinch-hit in the 17th inning and singled to drive in the eventual winning run. Accordingly, the June 3 game was officially the sixth game of Bonds’ career but chronologically his fifth major-league game. A day after this game, Bonds hit his first major-league home run, off Craig McMurtry, in Pittsburgh’s 12-3 win over Atlanta. He hit 762 home runs over 22 seasons, more than any other player in major-league history as of July 2021.

14 Bob Hertzel, “Strained Hamstring PutRay on Sideline,” Pittsburgh Press, May 31, 1986: C3. Baseball-Reference and Retrosheet give Ray’s batting average entering the game at .361, but both of those totals include the double that he had in his only at-bat when the Pirates resumed their suspended April 20 game on August 11. Official statistics on the day of the game credited Ray with a .359 average.

30 Nearly a year to the day later, Simmons had another key pinch-hit home run in a Braves win over the Pirates. On May 16, 1987, his three-run homer off John Smiley in the top of the seventh inning at Three Rivers Stadium snapped a tie and put Atlanta ahead to stay in a 10-8 win. Bob Hertzel, “Homers Beat Pirates, 10-8,” Pittsburgh Press, May 17, 1987: D1.