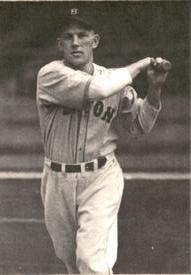 The attendance at Cleveland’s League Park for a Tuesday afternoon game was pretty small at 2,500 — which might be just as well, because of the loss that Indians fans endured that day.

Manager Steve O’Neill’s Cleveland squad was hosting the Boston Red Sox, led by shortstop-manager Joe Cronin. One wouldn’t have known it at the time, but the two ballclubs were within two games of each other by season’s end. Cleveland (83-71) finished in the first division in fourth place, 19 games behind the 102-win New York Yankees, while the Red Sox were out of the money, in fifth place at 80-72. Both teams had been middle-of-the-pack for a few years by 1937.

Coming into the game, though, the Indians were only one game out of first place and the Red Sox 3½ games behind them. The standings were still pretty tightly bunched.

The starting pitchers were Johnny Allen for the Indians and Archie McKain for the Red Sox. Allen, a former Yankee, had been 20-10 (3.44 ERA) for Cleveland in 1936. He was 3-0 for the season to this point. McKain, a left-hander, was in his first year in the majors. He was also undefeated (2-0) before this game.

The Red Sox had runners on base in each of the first three innings, but never scored. The Indians pushed across a few runs early — one in each of the first three innings. Center fielder Earl Averill hit a two-out solo home run to deep center field in the bottom of the first. Two one-out walks and a groundout led to a run in the second. In the third, right fielder Roy Weatherly singled with one out, then moved to second on a walk to Averill and to third on a walk to Hal Trosky. Moose Solters lifted a fly ball to right field, and Weatherly tagged and scored for a 3-0 Cleveland lead.

The Red Sox got their first run in the top of the fourth. Third baseman Pinky Higgins singled to right and the catcher, Gene Desautels, doubled to right-center to score Higgins. Dom Dallesandro pinch-hit for McKain and struck out.

Jack Wilson took over pitching for the Red Sox. He set the Indians down in order in the fourth and fifth, and saw the Red Sox get back to within a run in the top of the sixth. Boob McNair reached on a throwing error by shortstop Lyn Lary. Higgins then doubled to right. Red Sox right fielder Fabian Gaffke hit a fly ball deep enough to left for McNair to tag up and score.

It was 3-2, Cleveland, but the Indians pounced on Boston for four runs in the bottom of the sixth. There was a walk, a single, and an out, then Wilson hit catcher Frankie Pytlak with a pitch, loading the bases. Roy Hughes singled, driving in two runs for a 5-2 lead.

Allen bunted to try to bring in Pytlak from third. The run scored when Wilson threw the ball away. Lyn Lary grounded to McNair at second base and McNair, too, threw the ball away for another Red Sox error and another Cleveland run. It was 7-2, Indians, and the game was looking good for them. A win could put them in first place.

Cronin singled in the seventh and Gaffke doubled in the eighth, but neither Boston baserunner got any further. In the bottom of the eighth, the Indians added another run. Hughes singled and was sacrificed to second by Allen. Lary singled him home. It was 8-2 in Cleveland’s favor heading into the ninth inning.

Three outs from victory, Allen couldn’t get anyone out. Nor could Joe Heving, who came in to relieve him.

Jimmie Foxx hit a double off the six-foot-high left-field bleacher wall, driving in both Almada and Cronin. The score was now 8-6.

McNair doubled to left, the ball falling behind a “motionless” Solters. Foxx stopped at third. Both Foxx’s and McNair’s doubles were to left field, and in both cases left fielder Solters was out of position.1

Higgins singled to right field, and Foxx scored. The Red Sox had closed the gap to one run, 8-7, there was still nobody out, and McNair was on third, representing the tying run.

O’Neill turned to another pitcher, Whit Wyatt. Gaffke was up. He lined a shot to left-center field for a double. Higgins scored to tie the game, and McNair crossed the plate to put Boston ahead by a run. After the leadoff walk, the Red Sox had collected seven base hits, one after the other.

Gene Desautels laid down a sacrifice bunt, and Gaffke got to third base. Pinch-hitting for Doerr, who had himself started the inning as a pinch-hitter, was pitcher Wes Ferrell, an excellent hitter in his own right. He hit a fly ball to right field and Gaffke tagged up and scored the eighth run, giving Boston a 10-8 lead. Buster Mills grounded out, short to first.

Johnny Marcum came in to pitch the bottom of the ninth for the Red Sox. He faced three Cleveland batters and retired them all.

Instead of staking a claim to first place, the Indians had lost. “Tossed aside like so many toy balloons in a twister,” wrote Sam Otis in the Cleveland Plain Dealer, “the tribesmen recovered consciousness to find themselves a full game behind the White Sox and Yankees.”2 Indians fans in attendance — Otis called them the “wolves” — howled their displeasure.3

Mel Webb of the Boston Globe wrote, “It was the rally of rallies for the year, and when it was all over the Boston dressing room was a mad house.”4

Neither starter was recorded with a decision. Jack Wilson got the win. Joe Heving took the loss. Allen recovered from his ninth-inning disaster to finish the season with the best winning percentage in the major leagues; he was 15-1.

3 The negative reaction was of such magnitude that O’Neill felt compelled to issue a statement that he had no plans to bench Solters. See Eugene J. Whitney, “Fans Wire, Call in Bewilderment,” Cleveland Plain Dealer, June 9, 1937: 18.