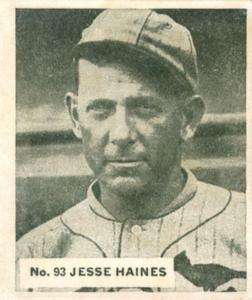 The St. Louis Cardinals’ dismal start to the 1921 season – one win in their first 10 games – seemed to augur yet another disappointing campaign for Branch Rickey’s team. The Cardinals’ losing record wasn’t that unusual, since they had been mostly a second-division club throughout their history. The franchise had never been in serious contention for a National League pennant, dating back when they joined the league in 1892.1

But the Cardinals’ 1-0 win over the Cincinnati Reds on May 1, spearheaded by Jesse Haines’s masterful pitching performance and several sharp defensive plays, gave them back-to-back wins for the first time in the young season. It was the start of a turnaround that made 1921 the first relevant season in franchise history.

After the Reds opened the three-game series at Sportsman’s Park with a 7-3 win on April 29, dropping the Cardinals’ record to 1-9, rookie Bill Pertica provided signs of life the next day by outdueling Cincinnati’s Dolf Luque in a five-hit, 3-1 win. The pitching matchup for the final game of the series on May 1 featured Haines against Cincinnati veteran Rube Marquard. They didn’t disappoint the crowd of 6,000 on a cold spring Sunday afternoon,2 as both hurlers pitched brilliantly in the low-scoring contest.

The 27-year-old Haines, who had lost his two previous starts, was in his second full season with the Cardinals, having posted a 13-20 record the year before. The right-hander’s major-league career started with a single appearance for Cincinnati in 1918. He became the property of St. Louis before the 1920 season when the Cardinals purchased him from Kansas City of the American Association.

Marquard, with a 2-2 record coming into the game, was in his first season with the Reds. At age 34, he had already compiled a storied career, with 159 wins for the New York Giants and Brooklyn Robins over the previous 14 seasons. The future Hall of Famer had teamed with Christy Mathewson to help the Giants win three consecutive National League pennants in 1911-1913. He pitched for the Robins when they won pennants in 1916 and 1920. (The Giants and Robins were on the losing end of each of those World Series appearances.)

Burt Shotton was at the helm of the Cardinals for the Sunday game, in lieu of manager Rickey. Just three years younger than Rickey at 36, Shotton had acquired the nickname Sunday Manager, dating back to his days with the St. Louis Browns, where Rickey had also been manager. Shotton frequently filled in for Rickey, who had vowed to his devout mother that he would not go to the ballpark on Sundays.3

Shotton made several changes in the lineup that day, including starting Specs Toporcer at second base. Regular second-sacker Rogers Hornsby backfilled third baseman Milt Stock, who had been spiked by an umpire in the previous day’s contest. Shotton also made changes in the outfield because center fielder Cliff Heathcote had been injured in the previous day’s game. Les Mann was moved from his normal left-field spot to center field, while Joe Schultz was inserted in left field. 4

Reds manager Pat Moran had a welcomed addition in his lineup. Center fielder Edd Roush made his first start of the season, after holding out in a salary dispute with Reds management. The two-time batting champion was a late-inning substitute as a pinch-runner the day before, upon learning Commissioner Landis had reinstated him.5

The Cardinals scored the only run of the game in the second inning. Jack Fournier smacked a long drive to center. Roush ran a long distance in pursuit, but the ball glanced off his glove and Fournier reached third with a triple. Austin McHenry singled off third baseman Sam Bohne’s glove; Fournier played it safe and didn’t attempt to score. Doc Lavan followed with a fly ball that sent Fournier home for a 1-0 St. Louis lead.

The Reds threatened in the sixth inning, when Marquard led off with a single and advanced to second on Bohne’s sacrifice. Jake Daubert hit a long single, but Marquard held up at third. Cincinnati had runners at the corners with one out.

Roush grounded weakly to second baseman Toporcer, who fielded the ball cleanly and threw Marquard out at the plate. Meanwhile Roush rounded first and headed to second, while Daubert raced to third. Cardinals catcher Pickles Dillhoefer threw to shortstop Lavan in hopes of catching Roush; Daubert continued toward home. Lavan threw a strike to the plate. Dillhoeffer tagged Daubert to complete the double play – and record his second putout of the play. The threat was extinguished.

Those critical plays were part of the Cardinals’ sound defensive game that secured their early lead. Toporcer fielded seven chances without an error. Left fielder McHenry made a spectacular shoestring catch on Ivey Wingo’s fly ball in the fifth inning.

Roush was held hitless until the ninth, when he singled with two outs. He attempted to steal second; Dillhoefer’s throw beat him to the bag, but Lavan misplayed the throw for an error, keeping the Reds alive. But Haines induced Pat Duncan to ground out to end the game.

Haines gave up only five hits and a walk, with two strikeouts, in his best performance so far in the season. He shut down the Reds early, allowing only one hit in the first four innings. He kept them at bay in the late innings, yielding only one hit in the last three. Haines’s teammates remarked that “he had as good a fastball as they had ever seen.”6

Marquard kept the Cardinals close for seven innings, giving his teammates the chance to win the game. After allowing the run in the second, he limited the Cardinals to one hit in the next five innings. He hit a batter but did not issue any walks. He gave way to Buddy Napier in the eighth inning, after yielding two hits. Marquard was charged with his third loss.

Haines wound up leading the Cardinals with 18 wins, including six in a row from May 21 to June 13, when St. Louis surged to 18 wins in 22 games. A fastball and curveball pitcher in 1921, he developed a knuckleball in 1923 and went on to have a Hall of Fame career in St. Louis, helping the Cardinals to four National League pennants, including two World Series championships. In four World Series he posted a 3-1 record and a 1.67 ERA. His 210 career wins for the Cardinals are second (as of 2021) only to Bob Gibson, who is the all-time Cardinals leader with 251 wins.

The Cardinals’ modest two-game win streak was the first stirring of what turned out to be their best season to date in the National League. They went 40-19 after August 1, finishing with an 87-66 record – more wins and a higher winning percentage than in any of their previous NL campaigns. They finished in third place, seven games behind the league-leading Giants. They eliminated the Pirates from pennant contention by defeating them three times in the last week of the season. For the first time in franchise history, the Cardinals had been relevant in the last month of the season.

Play-by-play details of the game were obtained from game accounts in the St. Louis Post-Dispatch and Cincinnati Enquirer, both referenced in the Notes.

1 As the St. Louis Browns they had won four straight American Association pennants (1885-1888).

3 Shotton and Rickey had a long relationship dating back to 1913 when Rickey took over as manager of the Browns, with whom Shotton was playing. When Rickey became associated with the St. Louis Cardinals in 1919 in front-office and field manager capacities, he acquired his trusted friend to fill roles as part-time player and weekend manager. After retiring as a player, Shotton remained connected to Rickey. He was eventually hired by Rickey as manager of the Brooklyn Dodgers in 1947, when Leo Durocher was suspended for a year by Commissioner Happy Chandler.

5 Roush had been a holdout since spring training, seeking more money, but Reds owner Garry Herrmann held firm. Roush was reinstated by Commissioner Landis on April 30, and he got into the game that day as a substitute.