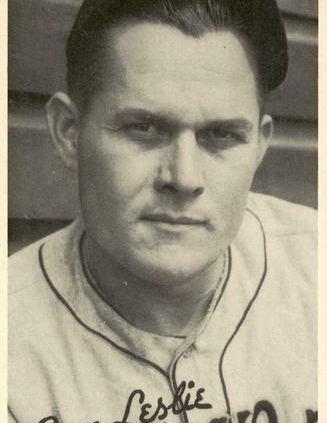 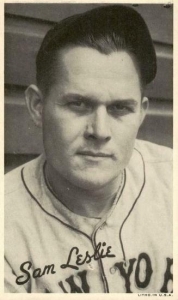 Sam Leslie played parts of 10 seasons in the major leagues. He began his career with the New York Giants in 1929, where he was primarily a pinch-hitter for four seasons, making only nine defensive appearances with future Hall of Famer Bill Terry entrenched at first base. On June 16, 1933, he was traded to the Brooklyn Dodgers for Lefty O’Doul and Watty Clark. In 1934 Leslie posted the best season of his career, finishing in the National League’s Top 10 in several categories.1

In February 1936 the Giants purchased his contract back from the Dodgers, and Leslie was once again calling the Polo Grounds his home field, this time as the regular first baseman. Leslie played first base in 99 games in 1936, while Terry, in his final season a player-manager before becoming a full-time skipper, appeared in 56 contests. Although Leslie’s lifetime batting average was a respectable .304, he was never much of a slugger (75 percent of his hits were singles). Leslie hit 36 home runs in his career, with only 28 triples. Yet on May 24, 1936, he hit both a homer and a triple, adding a double and two singles, to hit for the cycle in the Giants’ win over the Philadelphia Phillies.

The Giants were in the midst of a 17-game homestand. They had won seven of eight games before hosting the Phillies for four games. At close of play on May 21, the Giants were a half-game out of first place, chasing the St. Louis Cardinals, while the Phillies were stuck in the NL cellar. The teams split the first two games, and a crowd of 18,616 came through the turnstiles to watch the third contest of the series.2

Hal Schumacher started for the Giants. The veteran right-hander had won his last three starts and sported a 2.10 ERA. Opposing him was another righty, Euel Moore, playing in just his third (and final) season. He had been briefly with the Giants in 1935 before signing again with Philadelphia before the 1936 season. Primarily a reliever, he was making just his second start of the season. Moore had a 4.08 ERA, and in his only other start, he had pitched into the sixth inning.

Philadelphia’s Lou Chiozza started the game with a double to left. Ernie Sulik sacrificed Chiozza to third, and he was brought home on Johnny Moore’s fly out to left. Dolph Camilli singled to continue the inning but was caught trying to steal second, so the Phillies settled for the lone tally.

The Giants tied the game in the second inning. Back-to-back singles by Hank Leiber and Gus Mancuso put runners on the corners. Travis Jackson singled, making it three consecutive hits to start the inning, and Leiber scored.

An inning later, New York took the lead. Burgess Whitehead beat out a bunt for a single. Leslie, who had doubled in the first frame, popped the ball just past third base for single. Euel Moore retired both Mel Ott and Leiber, but Mancuso joined the hit parade with an RBI single to left, giving New York a 2-1 lead.

The Giants manufactured another run in the fourth. With two outs, Jo-Jo Moore singled past first baseman Camilli, stole second base, and moved to third on a passed ball.3 Whitehead’s single scored the runner. Leslie also singled, causing a pitching change; Tom Zachary entered in relief and retired Ott for the inning’s final out. Through the first four innings, the Giants had mustered 10 hits but had only three runs to show for them.

Philadelphia rallied in the fifth inning. Chiozza and Sulik knocked consecutive one-out singles, giving Philly runners at first and third. Johnny Moore grounded to third baseman Jackson, who threw home in time to catch Chiozza for the inning’s second out.4

Camilli then singled up the middle, and Sulik scored, as Moore advanced to third. When Sulik took off on a steal of second, Mancuso’s throw was off the mark and went into the outfield, allowing Moore to score the game-tying run. Schumacher then walked both Pinky Whitney and player-manager Jimmie Wilson, loading the bases. But Leo Norris was retired to end the rally, with the game deadlocked, 3-3.

Just as quickly, the tie was broken. Leiber singled in the bottom of the fifth. Zachary walked Mancuso. Both runners advanced on Jackson’s sacrifice. Then Zachary walked Dick Bartell to load the bases. Wilson made a pitching change, calling for Syl Johnson as Philadelphia’s third hurler of the game. Schumacher singled to left, driving in Lieber with the Giants’ fourth run.

Schumacher set down the Phillies in order in the top of the sixth, quickly putting the bats back in the New Yorkers’ hands. Leslie led off and launched his third home run of the season, “against the upper right tier”5 of the Polo Grounds. Ott drew a walk and was sacrificed to second by Leiber. With two outs, Jackson doubled to left, driving in Ott with another Giants run, making it 6-3.

Sulik and Johnny Moore each hit home runs to deep right field to start the seventh inning, and Schumacher’s duty on the mound was over. Frank Gabler came in from the bullpen in relief. According to the Philadelphia Inquirer, Gabler’s entrance marked the “the sixty-seventh pitcher that has appeared for the Giants in 33 games.”6 Gabler gave up a single to Whitney but preserved New York’s 6-5 lead.

In the bottom of the seventh, Leslie again led the charge. With two outs, the Phillies could have escaped damage, but Wilson dropped a foul pop by Whitehead, which kept his at-bat going. Whitehead was then hit by a pitch, bringing up Leslie, who had already collected two singles, a double, and a home run in four trips to the plate. This time he lined a Claude Passeau pitch to deep center for a three-bagger. That triple completed the cycle for Leslie and increased New York’s advantage over the Phillies to two runs, 7-5.

In the eighth inning, the Giants batters faced Bucky Walters, described by the Philadelphia Inquirer as a “reformed infielder.”7 In the series opener two days earlier, Walters had blanked the Giants, scattering four hits in the 15-0 blowout win. This time, however, the right-hander yielded six hits and as many runs.

For the third time in the game, Leiber singled to start an inning. Mancuso, Jackson, and Bartell all singled as well, with Jackson driving in Leiber and Bartell getting two runs batted in, making the score 10-5.

Two outs later, Whitehead rolled a grounder to shortstop Norris, whose throwing error enabled Jo-Jo Moore (who had reached on a fielder’s choice) to get to third base (Whitehead took second). The New York Times gave credit to Walters for putting “a stop to Leslie’s hitting streak,”8 but this was achieved by allowing a base on balls, loading the bases again.

With Ott now batting, Walters threw a wild pitch and Jo-Jo Moore crossed the plate. Ott also worked a walk from Walters. Leiber singled again (giving him two in the inning and four in the game), and both Whitehead and Leslie scored. When it was over, New York had sent 11 batters to the plate, scoring six runs and putting the game out of reach. The Giants won, 13-5.

The Giants scored runs in all but the first inning. Ott walked twice, ending a 10-game hit streak, but his teammates sent 21 hits throughout the ballpark. It was their “high-water mark”9 for hits to this point in the season. In addition to Leslie’s three extra-base hits, Jackson had a double. The other 17 hits were all singles.

Schumacher earned his fifth victory of the season. He had allowed nine of Philadelphia’s 10 hits and all of their runs, but after the second inning the Giants never trailed. Philadelphia’s Zachary took the loss.

Leslie “unfolded a complete cycle of base hits.”10 Leslie reached base in every plate appearance, with five hits and a walk. He drove in two runs and scored twice himself. Further, he spread the hits to all parts of the field: singles to both center and left, a double to left-center, a triple to left-center, and a home run to right. His five hits established a career high,11 as his batting average jumped 37 points to .355, and his slugging percentage increased from .443 to .538.

Leslie became the 14th player in Giants franchise history to hit for the cycle, the first since Freddie Lindstrom, who had accomplished the rare feat on May 8, 1930, against the Pittsburgh Pirates. Leslie was the only major leaguer to hit for the cycle in 1936.

The Giants were in fifth place in mid-July but won 13 of 17 games to finish the month. They then won 24 of 27 games in August, which included a 15-game winning streak, enabling Terry’s team to capture the NL pennant. They ended the season with 92 victories but lost the World Series in six games to the New York Yankees. (Leslie was 2-for-3, appearing in three games.)

In 1936, the phrase “hitting for the cycle” was relatively new as a means to convey a batter’s hitting the four different base hits (single, double, triple, and home run) in the same game. The phrase appeared in the papers in 1933 but didn’t become widely used until 1937.12 The New York Times reported that Leslie “unfolded a complete cycle of base hits,”13 but the Pittsburgh Post-Gazette reported that, in this 1936 game, “Leslie vied with his American League contemporaries by getting five hits out of five times at bat, including the complete album of hits, a homer, a triple, a double, and two singles.”14 Neither the New York Daily News nor the Philadelphia Inquirer mentioned the word “cycle.”

2 This attendance figure is from the “Leslie’s Mace Paces Terrys in Easy Score,” Philadelphia Inquirer, May 25, 1936: 13. In their box scores, both Baseball-Reference and Retrosheet list the attendance at 20,000.

3 “Leslie Leads Attack With 5 Hits in 5 Times Up,” New York Daily News, May 25, 1936: 39. Neither Retrosheet nor Baseball-Reference mentions the passed ball. Both accounts imply that Jo-Jo Moore was on second base when Whitehead singled.

4 “Leslie Leads Attack With 5 Hits in 5 Times Up.” Again the play-by-play accounts in both Retrosheet and Baseball-Reference differ from the Daily News article. The newspaper reported that Moore grounded the ball to Jackson, who threw to catcher Mancuso, who tagged out Chiozza. Moore ended up at first base on the play. Retrosheet and Baseball-Reference show that Chiozza was out trying to advance from third (with Moore batting) and that Moore then was walked by Schumacher. Other New York and Philadelphia newspapers do not mention the play at the plate. Further, Baseball-Reference is vague about the play (“Chiozza out at HM/Unknown”), but all accounts credit Schumacher with four walks allowed.

6 “Giants Pound Five and Route Phillies,” Philadelphia Inquirer, May 25, 1936: 15. Through the Giants’ first 33 games of the season, their pitchers had combined for only 11 complete games, led by Carl Hubbell’s six (Schumacher had three). Hubbell finished the 1936 campaign with 25 complete games, three behind major-league leaders Wes Ferrell (Boston Red Sox) and Dizzy Dean (St. Louis Cardinals). Therefore, in their other 22 games, New York used a total of 56 pitchers.

7 “Leslie’s Mace Paces Terrys in Easy Score.” While primarily a pitcher, Walters did play one game in 1936 at second base and another at third base. He led all pitchers in the National League in fielding assists that season (96). In addition, he led the circuit in shutouts (4), but also in losses (21). The Phillies lost 100 games in 1936.

9 “Giants Pound Five and Route [sic] Phillies.” On September 17, the Giants pounded out 23 hits in a 17-3 win over the Brooklyn Dodgers.

12 See Allison Davidson and Mike Huber, “Origin of the Phrase ‘Hitting for the Cycle’ and an Approach to How Cycles Occur,” SABR Baseball Research Journal, Spring 2018. This article can be found online at sabr.org/journal/article/origin-of-the-phrase-hitting-for-the-cycle-and-an-approach-to-how-cycles-occur/.