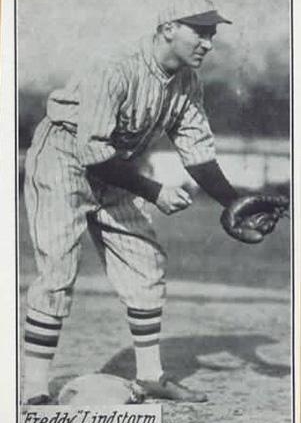 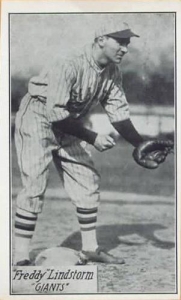 The New York Giants began the 1930 season with seven straight wins, including two in walk-off fashion, but followed with six losses in their next nine games. Entering play on May 8, John McGraw’s squad (10-6) had the best winning percentage in the National League (.625), yet they stood a half-game behind the Chicago Cubs (13-8) in the standings, since the Cubs had played five more games and had three more victories than the Giants. The Pittsburgh Pirates (11-7) were tied with the Giants for second place. New York and Pittsburgh were concluding a four-game series, and, as the Pittsburgh Post-Gazette reported, “Ten innings were required by the Giants before they finally trimmed the Buccaneers, 13 to 10.”1

An estimated crowd of 5,000 fans showed up at Pittsburgh’s Forbes Field for the Thursday-afternoon contest. Veteran Percy Jones started for the Pirates, making his second start of the season. The right-hander had played seven seasons for the Cubs and one for the Boston Braves before being traded with cash to the Pirates for Burleigh Grimes on April 9, on the eve of the start to the season.2 He was opposed by New York’s Freddie Fitzsimmons, who was making his third start of the young season. Fitzsimmons, also a righty, had lasted just 1⅓ innings in his previous outing, against the Cincinnati Reds, when he was roughed up for six hits and five runs, all earned.

Jones encountered trouble from the start and “before two rounds were finished, Glenn Spencer was called into the combat.”3 With one out in the top of the first, Freddie Lindstrom singled past short and scored on Bill Terry’s triple to right-center field. Terry, who entered with a .403 batting average,4 scored on Mel Ott’s sacrifice fly. Travis Jackson’s two-out double was wasted when he was tagged out at third on Andy Reese’s grounder.

The Pirates responded in their half. With one down, George Grantham doubled to left field. Paul Waner walked and Adam Comorosky’s single to right drove Grantham home.

The home crowd saw “another enemy run”5 scored in the second inning. Freddy Leach led off by being hit by a pitch. Shanty Hogan’s single sent Leach to third base. Fitzsimmons helped his own cause at the plate with a single to center, and Leach’s run made it 3-1. When Doc Marshall singled to load the bases, Pittsburgh’s skipper, Jewel Ens, made the pitching change, bringing in Spencer to relieve Jones. The first batter he faced was Lindstrom, who grounded into a first-to-catcher-to-first double play. Terry walked to load ’em up again, but Ott flied out for the second time to end the inning. Despite allowing the first four batters in the inning to reach, Pittsburgh had dodged a huge inning, allowing just one run.

In the Pittsburgh third, Fred Brickell singled up the middle and Grantham “slapped the ball into the right field stand,”6 tying the score with his second homer of the season. New York jumped on Spencer in the fourth. Hogan started the offense with a single to center. After Fitzsimmons was retired, Marshall walked, and Lindstrom “tripled to the left corner of the pasture,”7 driving in both runners. Terry reached for the third straight time with a single to left, plating Lindstrom. New York now led, 6-3.

In the bottom of the fifth, Spencer drew a leadoff walk but was forced at second by Brickell’s grounder. Grantham also walked, and both runners advanced on Waner’s groundout to the right side. Comorosky’s two-run single into right field trimmed the Giants’ advantage to 6-5.

New York, however, immediately struck back. Lindstrom led off the top of the sixth by driving a Spencer pitch deep into Forbes Field’s vast center field and rounding the bases for an inside-the-park home run, his first homer of the season. Terry walked, Ott singled, and Jackson lifted a ball beyond the fence. His “circuit girdler sailed completely out of the lot on the left side. It disappeared above the score board”8 for a three-run home run, his sixth of the young season, pushing New York’s lead to 10-5. In just 17 games, Jackson now had 19 runs batted in. Lil Stoner9 replaced Spencer on the mound for Pittsburgh, and he immediately got three outs, all on infield grounders.

Pittsburgh’s disadvantage “was pruned down”10 in the seventh and eighth innings. In the seventh, Erv Brame’s single scored Rollie Hemsley, who had led off the frame with a double. After Brickell grounded into a double play, Grantham, Waner, and Comorosky hit consecutive singles, with Grantham scoring. Bill Walker was summoned from the New York bullpen to relieve Fitzsimmons. An inning later, Walker lived up to his name by giving free passes to Pie Traynor and Ira Flagstead. Al Bool singled home Traynor, and New York held a slim, two-run lead going into the ninth inning.

Larry French entered as the Pirates’ fifth pitcher to start the ninth inning.11 The Giants wasted a two-out triple by Walker in their at-bat. Back on the mound and three outs from victory, Walker struck out Waner, allowed a single to Comorosky, and then struck out Gus Suhr. With the Pirates down to their final out, Comorosky advanced to second, and then to third, both on defensive indifference, while Traynor looked at balls out of the strike zone. Traynor eventually drew a walk, which meant Walker had allowed the tying run to reach base.

This proved fatal, as Dick Bartell stroked a triple to deep center, driving home both runners to deadlock the game. Walker stranded Bartell at third by intentionally walking Hemsley and getting Flagstead to ground out, but his blown save caused the game to go into extra innings, with the score 10-10.

Lindstrom led off the New York 10th. He had doubled in the seventh, completing the cycle, but he did not score in that frame. Now, he singled for his fifth hit of the game but was forced at second by Terry.

French walked Ott before Jackson grounded a potential double-play ball to Bartell at shortstop, who threw to second baseman Grantham, forcing Ott. In his haste to make the throw to first, Grantham made “a wild low heave”12 that ended up in the stands. Terry came home with the go-ahead run.

Reese singled, and he and Jackson scored two unearned insurance runs when Leach tripled to center. Pittsburgh batters were three-up, three-down in the bottom of the inning, and New York won, 13-10.

Every Giants batter contributed at least one hit, including both pitchers, as New York pounded out 19 safeties. The Pirates banged out 14 hits, and Grantham went 3-for-5 and was a triple shy of hitting for the cycle himself. In the four-game series, the Giants put 41 runs across home plate, scoring at least eight times in each game, while the Pirates tallied 36 total runs.

French got the loss, and Walker, despite his blown-save opportunity and four walks in 3⅓ innings, picked up his fourth win of the season.

In only his 17th game of the season, Lindstrom had his second five-hit performance.13 He raised his batting average 39 points, to .382, and his OPS jumped from .780 to .927.14 After the game, New York manager McGraw told reporters, “Never saw Lindstrom play better ball.”15 Even Traynor, the Pirates’ future Hall of Fame third baseman, had praise for Lindstrom, saying, “Lindstrom looks to be at his best.”16

Lindstrom became the first of three major leaguers to hit for the cycle in 1930. He was later joined by the Chicago Cubs’ Hack Wilson (on June 23 against the Philadelphia Phillies) and the St. Louis Cardinals’ Chick Hafey (on August 21, also against the Phillies). Lindstrom’s accomplishment marked the 13th time in Giants franchise history that a batter had hit for the cycle.17

Even with the victory, the Giants remained a half-game back in second place, as the Cubs defeated the Brooklyn Dodgers, 7-4, scoring six runs in their final three turns at bat to keep them in first place. Pittsburgh dropped into the third spot in the NL standings.

2 The 1930 season was Jones’s last in the majors. After this game, he made just six more appearances, all in relief. His final major-league appearance took place on June 11, when he pitched three innings against the Giants, allowing six runs.

9 Ulysses Simpson Grant Stoner was in his first (and only) season with Pittsburgh, after seven seasons with the Detroit Tigers. He made only five appearances for the Pirates and pitched for the Philadelphia Phillies in 1931, his final season in the majors.

11 Heinie Meine pitched the eighth for Pittsburgh, retiring all three batters he faced.