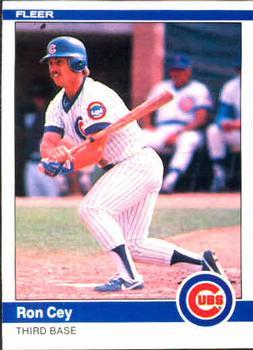 Cubs announcer Harry Caray began his WGN-TV broadcast on May 27, 1984, by proclaiming it to be “a beautiful day for baseball at Wrigley Field in Chicago as the Chicago Cubs take on the troublesome Cincinnati Reds.”1

The Reds won the first two games of the three-game weekend series. The losses put a damper on the Cubs’ homestand, which had begun with sweeps of the Houston Astros and Atlanta Braves for a six-game winning streak.

After a 71-91 finish in 1983, Chicago’s North Side had been full of optimism in the first two months of the ’84 season. On this Sunday of Memorial Day weekend, the Cubs stood tall in first place with a 26-17 start and a one-game lead in the National League East Division ahead of the defending NL champion Philadelphia Phillies.

Cincinnati had a 23-22 record. It put the team in second place, half a game behind the three-way tie atop the NL West—Los Angeles Dodgers, Atlanta Braves, and San Diego Padres.2 The Cubs faced a terrific challenge. Mario Soto boasted a six-game winning streak, a 7-1 record, a 2.61 ERA, and a three-hit victory against the Cubs 10 days earlier.

Dennis Eckersley took the mound for his first start as a Cub, having come to the Windy City from the Boston Red Sox through a trade two days before. Between his tears, the veteran right-hander had said, “I think my life needed a change.”3 Boston got Bill Buckner, the 1980 National League batting champion. Buckner started the season as Chicago’s starting first baseman before being benched in favor of Leon Durham.4

The game was scheduled to start at 1:20 P.M. but was delayed by 10 minutes to accommodate the massive Sunday crowd outside the ballpark slowly getting inside. Caray encouraged the TV audience to take advantage of the delay by venturing to the ballpark and buying tickets.5

The umpires were Paul Runge behind the plate; Randy Marsh at first base; Bob Engel at second; and Steve Rippley at third base. Prior to the first pitch, Caray speculated that Eckersley, a sinkerball pitcher, would benefit from the National League umpires calling lower strikes than their American League counterparts.

Cincinnati’s Gary Redus struck out looking to begin the game, thanks to “a slider that Eckersley throws to right-handers,” stated Carey’s broadcast partner Steve Stone. “Watch it. It breaks away ever so slightly. It’s down and he gets the benefit of the call from Paul Runge.”6

In the bottom of the first, Cubs fan favorite Ryne Sandberg—who batted .314 in 1984, the highest average of his career—took a strike with one out, then lofted the ball to left-center for what Caray called an “easy out” because the wind was blowing into the ballpark. But left fielder Redus collided with Eddie Milner, and the ball fell free. As Sandberg rounded second and headed for third, Milner picked up the ball and fired to third baseman Wayne Krenchicki.7

Krenchicki tagged out Sandberg; center fielder Milner was charged with a two-base error for the fielding mishap. Gary Matthews struck out for the third out.8

Soto kicked off the bottom of the second inning by walking Durham, a.k.a. “Bull,” and allowing a base hit to Mel Hall, putting runners on first and third.

Reds skipper Vern Rapp trekked to the pitching mound to consult with the right-hander, who was nursing a problem, apparently a blister, on his pitching hand. Caray and Stone concurred that Rapp should replace Soto; whatever the issue, Rapp kept Soto in the game. Stone highlighted that Soto had walked 27 men in 80 innings and had 70 strikeouts. “He’s given up nine home runs, so you can take the ball deep against Soto,” the broadcaster added.9

Caray brought Senator Charles Percy into the booth. As Ron Cey began his at-bat, Carey explained to Illinois’ longtime GOP senator that the White House had called the ballpark looking for him.10

Cey had a .235 average with 7 homers and 29 RBIs. A six-time All-Star in the 1970s and a member of four NL title-winning teams and one World Series champion with the Los Angeles Dodgers, Cey was nicknamed Penguin for his running style. Cey had joined the Cubs in 1983 and batted .275, the fifth-highest average in his 11-year career.11

The 36-year-old veteran clocked a low fastball on a 1-and-1 count down the left-field line, near the foul pole, and into the bleachers. Umpire Rippley watched the ball land and signaled that it was a home run.

A gaggle of Reds players darted toward Rippley and argued for a reversal with the passion of a zealot at a religious revival. It began a delay that lasted a little more than 30 minutes, consisting of calm moments punctured by lengthy, angry rants from both teams highlighted by a bench-clearing brawl.

Soto’s ire necessitated teammate Dan Driessen restraining the Dominican pitcher. The umpires huddled to discuss the situation while Stone emphasized that Soto bumped an umpire “at least once” in his tirade, which could be legitimate grounds for ejection.12

Rippley had uncertainty, according to Krenchicki, who said, “I was the first to confront him. When I said something to him, I could see in his eyes he wasn’t sure. The whole time we protested the call he didn’t say a word.”13

WGN’s graphics department had some fun in the chaos, putting up the score “Reds 0, Cubs ?.”

Engel, the game’s crew chief, sorted out the evidence.14 He reversed the ruling and called Cey’s hit a foul ball.

“What a rhubarb!” exclaimed Caray.15 It got worse when Soto tried to throw a bat at the fans in response to somebody throwing a beer at him near the Reds dugout. Soto sprinted back to the field like someone with turbochargers strapped to him and anger just as hot, to confront the umpires. Soto’s batterymate, Brad Gulden, tried to slow him down, and Cubs coach Don Zimmer attempted to intervene but was thrown to the ground.

Gulden stepped in to protect his teammate and the game’s governors. “I didn’t want Mario to be thrown out of baseball for the rest of his life,” the catcher explained. “The way he was coming, he would have killed the man. I felt like a middle linebacker for the Minnesota Vikings.”16

Soto was ejected. Cubs manager Jim Frey, too. Frey’s anger peaked when he ripped off his satin jacket and flailed his arms. Mel Hall restrained his manager and walked him backward. Bench coach Ruben Amaro Sr. took over managing duties.17

For his outburst and physical contact, Soto was suspended for five days and fined a reported $1,000.18 The punishment didn’t deter him. Three weeks later, he got another five-day suspension and a $5,050 fine for similar actions during a Reds-Braves game on June 16.19

During the clash, Cey remained in the dugout. After the game, he declined to comment.20

When play resumed, Bob Owchinko succeeded Soto. The lefty had been 1-1 with a 3.12 ERA in 11 games and 26 innings pitched, giving up 14 walks and striking out 17. Cey hit a first-pitch line drive to Reds shortstop Tom Foley. Jody Davis, a standout for the Cubs with a .305 average and 32 RBIs, whiffed and Larry Bowa popped out to Foley.21

The Reds went up 1-0 in the top of the fourth. With one out, Driessen cracked a double to left field; Gulden’s two-out triple scored him.

Cincinnati extended its lead to 2-0 in the top of the sixth. Gary Redus led off with a double, advanced to third base on Milner’s grounder to second baseman Sandberg, and scored on Dave Parker’s double.

The Cubs responded with all of their runs in the bottom of the sixth.

Rapp pulled the reliever for Bill Scherrer, who recently had the flu and looked rather gaunt with his 170-pound, 6-foot-1 frame. Scherrer retired Durham with a strikeout. Matthews attained one of his 17 thefts during the ’84 season and advanced another 90 feet to third base when Gulden’s throw went into the outfield.

Keith Moreland pinch-hit for Hall and scored Matthews with a sacrifice fly. Cey furthered the rally with a base hit, but Krenchicki fielded Davis’s grounder and forced Cey at second base.

Milner’s solo homer with two outs in the top of the eighth put the Reds even at 3-3. An inning later, they got the winning run when Gulden doubled and pinch-runner Tom Lawless crossed home plate on Krenchicki’s single.

Bruce Berenyi closed out the last two innings for the Reds and got credit for the win. Eckersley pitched a complete game, giving up nine hits in the 4-3 loss. He went 10-9 for Chicago in ’84; his combined record with his Red Sox tenure was 14-12.

The Cubs won the 1984 NL East, then lost to the Padres in the playoffs. The Reds finished in fifth place in the NL West.

When the game between the Midwestern rivals ended after 2 hours and 54 minutes, the 39,123 attendees—Wrigley Field’s largest crowd of the ’84 season to date—had quite a story to tell at Memorial Day barbecues, picnics, and pool parties.22

In addition to the sources cited in the Notes, the author consulted the Baseball-Reference.com and Retrosheet.org websites for pertinent material and the box scores noted below. He also screened the WGN broadcast, which is available on YouTube.

10 The White House staff had figured Percy was going to Wrigley Field. “I haven’t returned it yet,” said Percy, who served in the Senate from 1967 to 1985. “I just don’t want to set a precedent for letting them interfere with my watching the Cubs game.”

14 Hoard. Rippley, a rookie umpire, relied on Runge: “Maybe I missed it. What did you see, Paul?”

19 “Soto Is Banned Again,” New York Times, June 21, 1984: B14. Soto threw two brushback pitches to Claudell Washington in the third inning and got a warning from Lanny Harris, who had umpiring duties behind the plate. In the fifth inning, Washington stabbed at the first pitch and the bat slipped out of his hands. When Washington went to get the bat, he and Soto took their mutual verbal taunts to a physical level. Harris tried to get between them, but Washington “threw the umpire to the ground.” Soto fired the ball toward Washington in the melee. “The ball glanced off Atlanta coach Joe Pignatano and hit Harris in the leg.” Lonnie Wheeler, “Reds Wind Up Winners, But Soto May Be the Loser,” Cincinnati Enquirer, June 17, 1984: C-1.

21 During the bench-clearing brawl, Davis wound up on the ground and appeared to be injured, but stayed in the game afterward.

22 WGN. Retrosheet and Baseball Reference put the figure at 38,060. The setback and weekend sweep did not sidetrack the Cubs’ season. They remained in a two-team race for the NL East title through late July, when a surge of 14 wins in 18 games put the Cubs ahead of the New York Mets and in position to clinch their first postseason appearance in 39 years.