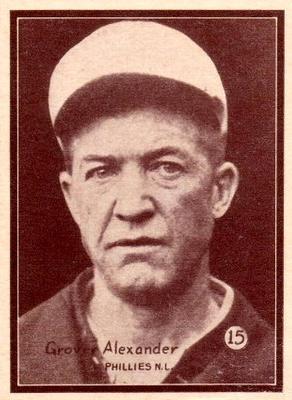 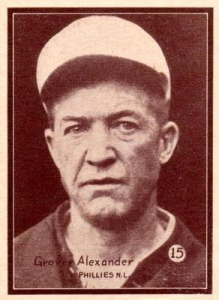 On a miserably raw Wednesday afternoon in the first full year of the Great Depression, with two second-division ballclubs playing in front of a few thousand fans, a legendary pitching career reached an ignoble end.

Grover Cleveland “Pete” Alexander was on his second stint with the Philadelphia Phillies, for whom he’d won 190 games in seven seasons between 1911 and 1917. That was before the onset of numerous physical and personal problems believed to be related to his World War I service, including shell shock, epilepsy, and alcoholism.1 He’d pitched remarkably well after the war – including two complete-game wins and a save in the 1926 World Series, and a 21-win season at age 40 with the 1927 St. Louis Cardinals – but in the spring of 1930 he was 43 and worn out.2

Wednesday, May 28, found Alexander and his Phillies teammates squeezing in their only game of a scheduled four-game series with the Boston Braves at Braves Field. The games of May 25 through 27 had all been rained out; makeup dates were added to the schedule in August and September. Cold, cloudy, windy, and drizzly, the weather on May 28 was “about as bad as it could be and yet permit the playing of a game,” the Boston Globe reported.3 The Philadelphia Inquirer described the conditions as “weather more like winter than spring.”4

Manager Burt Shotton’s Phillies entered the day in last place with an 11-19 record, 8½ games out of first place. Future Hall of Famer Chuck Klein and Lefty O’Doul, the 1929 NL batting champion, had tattooed their way to .383 and .390 averages amid a league-wide offensive explosion. Klein was second in the league with 11 homers5 and tied for the league lead in RBIs with 39, and his slugging average was a league-high .727.

The Phillies’ pitching, though, was historically bad – even by the standard of a club that led the NL in runs allowed per game for 23 straight seasons.6 For the full season, Phillies pitchers posted a collective 6.71 ERA, almost a run and a half worse than the next-worst team7 and well above the league average of 4.97. The team allowed more hits, runs, home runs, and walks than any other NL pitching staff, and tied for the lead in hit batsmen.

Righty starter Phil Collins was making his first start of the season for Philadelphia after 11 relief appearances. He entered the day with a 2-0 record and 3.91 ERA. Collins had pitched twice against Boston in April, working five innings and allowing 10 hits and seven runs – only one of them earned. In the bullpen, Alexander came into the game with an 0-3 record and a 10.07 ERA. He’d started against Boston on April 28 at the Baker Bowl, giving up eight hits and four runs in five innings of a game the Phillies eventually won.8 He’d surrendered at least one earned run in every one of his eight appearances.

Bill McKechnie’s Braves came into the game in sixth place, 6½ games back, with a 14-18 record. Slugging rookie outfielder Wally Berger ranked third in the NL with 10 home runs. On the other end of the scale, outfielders Lance Richbourg and Jimmy Welsh had the two lowest batting averages among qualifying NL hitters, at .214 and .220 respectively.9

Righty pitcher Socks Seibold, Boston’s starter, had opened the 1930 season in style. At the start of the game, he was tied with Brooklyn’s Dazzy Vance for the league lead in wins, with six. Having finished every game he’d started, Seibold also led the league in complete games with eight and was part of a three-way tie for most innings pitched at 71?. He had not previously pitched against the Phillies that season.

In front of 2,000 chilled fans – some drawn by a Ladies’ Day promotion10 – the Braves grabbed an immediate lead in the first inning. Richbourg, hitting leadoff despite his poor average, walked. A pair of future Hall of Famers well into their playing careers, 38-year-old Rabbit Maranville and 37-year-old George Sisler, advanced Richbourg to third with an infield single and a sacrifice fly respectively.11 Another sacrifice fly, by center fielder Randy Moore, scored Richbourg for a 1-0 Boston lead. The Braves also collected a walk and a hit batsman in the first but left the bases loaded.

Second baseman Freddie Maguire, a Boston native, was one of two Braves who hadn’t come to bat in the first inning. He made the most of his chance in the second as he singled to left, stole second base, and moved to third on Seibold’s grounder. Richbourg’s single to center field extended the Braves’ lead to 2-0.

O’Doul and Klein, the Phillies’ big boppers, stirred excitement in the fourth by leading off with a walk and a single. Seibold disposed of the next three Phils hitters on a fly ball, a foul pop to third, and a grounder back to the mound. First baseman Don Hurst, who followed Klein, “foozled” a bunt attempt that might have moved the runners along before he flied out.12

The Phillies again got their first two hitters aboard in the fifth inning, and a sacrifice put runners on second and third with one out. But when Tommy Thevenow grounded to third, third baseman Red Rollings threw home to retire the lead runner trying to score. O’Doul then hit another inning-ending foul pop, gathered in on the run by shortstop Maranville.13

Berger gave the Braves an insurance run in the sixth, leading off with his 11th homer of the season to center field.14 The Braves subsequently put two runners on with a double and a walk but could not advance them.

Philadelphia finally broke through against Seibold at the start of the seventh inning, as Fresco Thompson doubled to left-center field and Harry McCurdy singled him home.15 Looking to continue the rally, Shotton sent up lefty-swinging Tripp Sigman – frequently used as a pinch-hitter that season16 – to hit for Collins. Sigman grounded into a force at second, Denny Sothern flied to right, and Thevenow grounded into another force to hold the score at 3-1.

Alexander entered in the bottom half; as in his prior appearances, he was unable to hold the other team off the scoreboard. Richbourg hit an infield single, Maranville reached on an error by Hurst,17 and a sacrifice put runners on second and third with one out. Alexander struck out the dangerous Berger – his 2,198th and final big-league strikeout – but yielded a two-run single to Moore to make the score 5-1, Boston. Moore stole second and moved to third on an error by catcher McCurdy, but Old Pete got Al Spohrer to fly out to left to end the frame.

Alexander’s final major-league inning was less eventful. Rollings hit a foul pop to first, Maguire grounded to third, and Seibold popped to third. Alexander’s pitching line in his final appearance consisted of two innings, two hits, two unearned runs, no walks, and a strikeout. News accounts did not analyze the quality of his pitching, though the Philadelphia Inquirer pointed out that “it was Collins who lost the ball game” since the Braves already held a lead before Alexander entered.18

Seibold ensured that Alexander wouldn’t pick up a come-from-behind win by dispatching the Phillies in the ninth. After a leadoff single by Pinky Whitney, the Phillies’ sixth hit of the game, Thompson grounded into a force play and McCurdy lined into a double play to end the game in 1 hour and 53 minutes.

The Boston Globe praised Seibold’s effort, as well as that of center fielder Moore, who “covered a lot of territory, made some classy catches, and drove in three of the Braves’ five runs.”19 An Associated Press account of the game also singled out Moore for “a brilliant showing in the field.”20 The game was Seibold’s ninth consecutive complete game, and also his last of the streak. In his next start on June 1, the New York Giants shelled him for six hits and seven runs in two innings.

The Phillies announced Alexander’s release on June 3.21 He caught on for a few ineffective games with Dallas of the Class A Texas League and then was gone from baseball, spending much of his remaining life penniless and struggling with alcoholism.22 He was elected to the Hall of Fame in 1938.

After Alexander’s release, a sportswriter in Philadelphia, where Alexander shone brightest, paid tribute to the talented but troubled old campaigner: “A beloved Old Timer passed out of the picture yesterday. … The one-time idol of all Philadelphia … has been cast adrift on the baseball seas of adversity. … With a most lovable disposition, a frame that could stand any amount of work, a cunning in that good right arm that made him a terror to all batsmen and a most modest disposition, Grover Cleveland was one of the best liked players in baseball.”23

2 Alexander is celebrated for his relief appearance for St. Louis in Game Seven of the 1926 World Series against the New York Yankees. With the bases loaded in the seventh inning and the Cardinals holding a 3-2 lead, Alexander replaced starter Jesse Haines and struck out Tony Lazzeri to end the inning. Alexander pitched two more innings of shutout ball to close out the game, clinch a Series victory for the Cardinals, and retroactively earn a save decades later when saves became an official major-league statistic. Alexander had previously pitched complete-game wins in Games Two and Six of the Series – the latter the day before his Game Seven relief stint.

5 Hack Wilson of the Chicago Cubs had 13.

7 The Pittsburgh Pirates posted a team ERA of 5.24. The best team ERA in the NL belonged to the Brooklyn Robins, at 4.03.

8 The game against Boston was his second-to-last big-league start. Alexander subsequently started on May 11 against the Cincinnati Reds. He was knocked out in the fourth inning of a game the Phillies went on to lose, though he received no decision.

9 Both men subsequently got hot and significantly improved their averages. Richbourg closed the season hitting .304 in 130 games, while Welsh hit .275 in 113 games. Richbourg had begun his career with the Phillies, playing 10 games there in 1921 before moving on to the Washington Senators and the Braves.

11 From 1926 through 1930, a fly ball on which a runner or runners advanced to any base, not just home, was scored as a sacrifice fly.

14 “Seibold Limits Phil Hitters to 6 Scattered Hits.” Baseball-Reference lists it as a homer to left field.

16 Sigman appeared in 52 games, but made only 19 defensive appearances.

17 According to the Philadelphia Inquirer, Hurst dropped a throw from third baseman Pinky Whitney.

21 According to Alexander’s Sporting News contract card, he was released May 30.