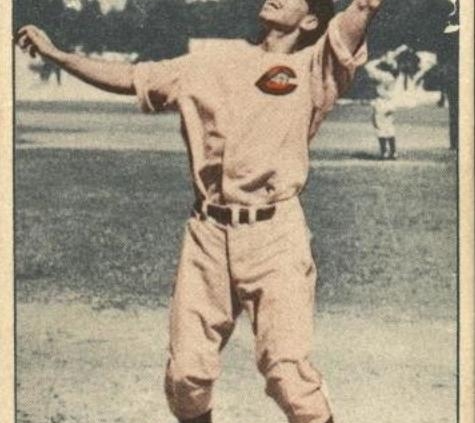 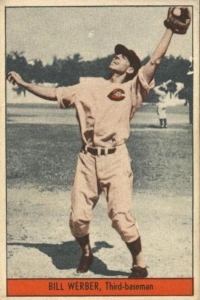 Bill Werber, sparkplug third baseman of the Cincinnati Reds clubs that won National League pennants in 1939 and 1940,1 had decided to retire from baseball after the success of the 1940 season.2 A broken toe on his right foot, a consequence of angrily kicking a fortified dugout water bucket in 1934, was continuing to cause pain in the toe and sciatic nerve pain in Werber’s leg. “Games were more work than pleasure.”3

But with the Reds poised to make another pennant run and the knowledge that “another raise would be forthcoming,” Werber, 33 years old, decided to play another season in 1941.4 In retrospect, it was a questionable decision, as the injury-riddled Reds finished third, 12 games behind the Brooklyn Dodgers. Werber was able to play in only 107 games at third base; his batting average slipped to .239 from .277, and a rookie replacing him during an injury absence hit safely in 17 consecutive games.5 After the season, “I let [Cincinnati general manager] Warren Giles know I that was retiring from baseball,” Werber wrote in his memoir.6

But as Werber, a native of suburban Washington, D.C.,7 was working in the family insurance agency over the winter, he received a call from Giles telling him the Giants, Cubs, and Pirates all wanted him to play for them in 1942. Giles could market Werber’s contract to any of those teams for $35,000 and promised to pay Werber a $3,500 bonus when he did. Werber decided “the bonus up front was worth one more effort to play,” and told Giles, “Sell me to the Giants.”8

The Giants, fifth in 1941 and entering the first year of World War II personnel uncertainty along with all of major-league baseball, were in Werber acquiring a proven veteran with “dash and fire,” useful for what they hoped would be a run at the Dodgers for the pennant.”9 Even as a new presence, Werber got right into the spirit of the Giants-Dodgers rivalry: “The fans in Brooklyn are like a lot of wild animals in the jungle,” he chided.

The Dodgers opened the season against the Giants at the Polo Grounds on April 14. Werber hit leadoff for player-manager Mel Ott, but didn’t produce much dash or fire, going 3-for-13 in three games and rolling into a double play in the opener. Brooklyn won two of three. The Giants and Werber then meandered through April – the team was so-so, standing 9-9 and 4½ games behind the Dodgers as they rolled into Cincinnati in early May on their first Western road swing of the year. Werber had started all 18 of the Giants’ games and hit leadoff in every one but was only 15-for-70 (.214) and without an extra-base hit.

Although he now wore a Giants uniform, to Werber “the fans in Cincinnati are the best. They regard the team as a civic enterprise, and they don’t always have to win to be entertained.”10 The Giants’ first 1942 game in Cincinnati was a homecoming for him; he was “still a big favorite with Crosley Field fans.”11

The Giants-Reds series was an odd Sunday-through-Tuesday set. The afternoon opener on May 3 brought 13,30912 to Crosley Field; they saw Bill McKechnie, pilot of their seventh-place Reds, send out 32-year-old right-hander Bucky Walters. Walters was trying to regain his All-Star and MVP form.13 He was 0-3 (6.75 ERA) in three starts and a disastrous relief appearance thus far. Ott went with third-year righty Bob Carpenter (1-0, 3.45 ERA in two starts).

This wouldn’t be Walters’ day either. Werber got “a mighty ovation when he lined [the] first pitch of the game into right field for a triple.”14 It was Werber’s first extra-base hit of the season and it led to a first-inning lead. Walters got Mickey Witek and Ott on quiet outs but walked Johnny Mize. With Willard Marshall at the plate, Ott called for a delayed double steal; as Werber started for home, Walters relayed to third baseman Bert Haas. Haas’s wild throw toward the plate hit Werber and he crossed the plate safely. Mize advanced to third on the play.15

Walters got out of that inning trailing only 1-0 when Marshall flied out but was immediately back in trouble in the Giants’ second. Harry Danning walked. Buster Maynard doubled him to third. Dick Bartell drove them both in with a triple to make the score 3-0.

After Carpenter struck out, the order flipped and Werber touched his old roommate for an RBI double. That finished Walters – McKechnie went to his bullpen for swingman Gene Thompson. Facing Witek, Thompson closed Walters’ 1⅓-inning log for the day, yielding a single that scored Werber with the fourth run of the inning.

Thompson regrouped to retire Ott and Mize and keep the deficit at 5-0. He sailed along through six more scoreless innings through the eighth. Carpenter had allowed Lonny Frey to advance as far as third base in the Reds’ first inning, but he too was solidly in control until the eighth. Then, 25-year-old Hank Sauer, pinch-hitting for Thompson with two outs and making only his second plate appearance of the season, nicked Carpenter for his first major-league home run, ending any shutout hopes.16

But Carpenter ran into real trouble in the ninth inning. Mike McCormick and Jim Gleeson opened with singles. Haas hit “a double play grounder”17 to Werber. But it wasn’t, as Werber made his eighth error of the season in spectacular fashion. “He cut loose with a three-base wild throw” past second base that scored both runners and allowed Haas to advance to third base.18

Haas remained there as Werber handled Frank McCormick’s grounder for the first out but scored on Gee Walker’s fly ball to center field. The Giants’ lead was down to 5-4.

With the bases empty and two outs, Eddie Joost kept things going with a single. McKechnie inserted power threat Ray Lamanno to hit for Rollie Hemsley;19 Ott left Carpenter in and he got Lamanno on a fly ball to right field to wrap up a nerve-wracking win, made close by Werber’s misplay.

Still, the Giants won and Werber’s triple and double – with two runs scored and an RBI – became his best offensive day yet with his new team. He lifted his batting average for the season from .214 to .227. But he couldn’t keep a hot bat and was hitless over the remaining two games of the series, both Cincinnati wins, and struck out twice.

By May 7, when Werber was again hitless in the first game of a doubleheader in Pittsburgh, Ott benched him for the first time and moved Bartell from shortstop to third base. Werber didn’t play again until he pinch-hit on May 24. In the interim he was reported to be “suffering from a sciatic condition and is now [May 15] being treated in a New York hospital.”20

Werber returned to the starting lineup on May 27. At the end of that game, he was batting .194, and although Ott continued to start Werber and use him as his leadoff hitter, Werber’s average hovered around .200.

Then, as Werber recounts in his memoir, “with about two weeks left in the season [September 5] my toe became so painful I told Ott I wanted to retire and leave the team immediately. I headed for home and the world of business. I’d had a lot of fun in spite of my aching toe, and I’d gotten paid well for it.”21 And the 34-year-old had wrapped up his career like a trooper – over his last 13 games he had 14 hits, averaged .255, and finished at .205.22

Neither the Giants nor the Dodgers won the 1942 National League pennant; Brooklyn stayed close to the Cardinals but finished two games behind. The Giants were third, but another 18 games back. Brooklyn took the season series with the Giants, 14 games to 8, but Werber supplied some of the dash and fire the Giants had been looking for against the Dodgers at the Polo Grounds on August 6 when he went 3-for-4, including his only home run of the season, in an 8-0 romp against three Brooklyn pitchers.

I had the opportunity to enjoy a lunch with Bill Werber and his wife, Tat, on May 29, 1995, in Naples, Florida, where we all lived at the time. Bill was then approaching his 87th birthday; he went on to reach 100 and for a time prior to his death on January 22, 2009, was the oldest living major leaguer. When we met, I was a new SABR member and just beginning to study players’ careers in depth. Bill and Tat, who was truly his life partner, helped me to understand the vital human element of a professional baseball career. Thanks to the SABR BioProject (2002) and Games Project (2014), I’ve been able to turn the interest that generated into more than a dozen SABR biographies and more than 25 game accounts.

In addition to the sources cited in the Notes, I consulted the Baseball-Reference.com and Retrosheet.org websites for player, team, and season pages, daily logs, and the box scores and play-by-play accounts for this game:

1 The Reds were swept by the New York Yankees in the 1939 World Series, but won in seven games against the Detroit Tigers in 1940.

12 Werber’s first game back in Cincinnati apparently had some drawing power. This attendance may appear underwhelming, but the Reds had drawn 2,013 the prior afternoon against the Phillies. Only a total of 2,939 attended the Monday and Tuesday games with the Giants.

15 “Giants Chase Walters, Beat Redlegs, 5-4,” Star-Tribune (Minneapolis), May 4, 1942: 8. The Baseball-Reference box score reports Haas’s error as occurring while attempting a catch, but this contemporary game story reports it as a throwing error. The Retrosheet box reports “error by Haas” without specifying throw or catch.

16 Sauer had played in nine games with the 1941 Reds and still had rookie status in 1942. He played in only seven games in 1942 before being demoted, then leaving for military service. He returned to the major leagues in September 1945. Traded to the Cubs in 1949, Sauer led the National League in home runs and RBIs and was the NL Most Valuable Player in 1952.

19 Hemsley entered the game hitting .133 and was hitless in three plate appearances this day. Lamanno, a rookie who had been alternating with Hemsley at catcher, was hitting .391 in 27 plate appearances with a home run and three RBIs. Shortly after this game McKechnie began to use him as his primary starter. He hit 12 home runs and led the 1942 Reds in OPS (on-base percentage plus slugging percentage).