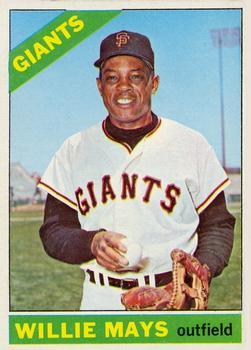 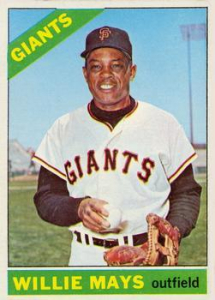 “I’m glad it’s all over with. Now I can go back to my regular swing,” a mentally exhausted Willie Mays groaned.1 “Every day, I’ve been trying to get it over with so I could go back to playing baseball.”2

The 10 days that passed in the spring of 1966 between Mays tying Mel Ott’s National League record for career home runs and breaking it were some of the most miserable of his career. The countdown had started in September of the previous season, when Mays hit his 500th homer while his San Francisco Giants chased the eventual-champion Los Angeles Dodgers for the pennant.

He belted his 505th career home run, giving him a career-best 52 for the season, in the final game of 1965, then he, the Giants, and their fans waited through the offseason for his seventh homer of 1966 to arrive.

Mays hit six homers in April, all of which either tied the game or put the Giants ahead. And after number 511 cleared the Astrodome fence in the top of the eighth on April 24, every ensuing plate appearance was a potential history-book moment. The national press converged on Candlestick Park for the Giants’ 10-game homestand and the swing that would rewrite the record books.

“I know that reporters and TV guys have jobs to do, but there are times when I wish I could hide for a few hours,” Mays said of the increased attention. “I don’t mean to gripe. It’s just that I have more fun playing ball than I do giving interviews.”3

Looking to end the circus, Willie began swinging for the fences every time he stepped into the batter’s box.

This put him in a slump. In the 23 at-bats following the home run in Houston, he managed just three hits. As his 35th birthday approached, Mays was nursing an injured left hand; he missed a game against the Cincinnati Reds with stomach flu; and, against the St. Louis Cardinals, he tripped over first base and hurt his knee.

“Everybody could see he was pressing,” teammate Willie McCovey assessed.4

After the record-tying blast, a reporter asked Willie if he’d been thinking about Ott as he rounded the bases, and Mays said no, he had only been thinking “tie score.”5 Now, as the record-breaking homer eluded him, he grew tired of answering the same questions. “How can I not think of the record?” he barked at the press. “You guys remind me of it every time I turn around!”6

A friend urged him to “blast one out tonight and return to playing your regular game,” to which Mays wearily replied, “I’d like nothing better than that, believe me.”7

Mays wanted to get the record-breaking home run not only to end the siege by the press, but also because he wanted it to happen in front of the hometown crowd. Several of his previous milestone homers had come on the road. His 500th and 511th were in Houston. He was at Shea Stadium in August 1965 for his 494th career home run, passing Lou Gehrig for fifth on the all-time home-run list and breaking Ralph Kiner’s NL record for homers in a month (17).

A home-field milestone, however, seemed unlikely in the penultimate game of the homestand on the night of May 4, considering who was on the mound for the Dodgers.

Though overshadowed by Sandy Koufax and Don Drysdale,8 Claude Osteen proved a solid third arm in L.A.’s rotation since joining the club the previous season. His 1966 campaign was off to a strong start. In his first five starts, he’d notched four wins, pitched 44 innings, posted an ERA of 1.64, and, most notably for this particular game, hadn’t surrendered a home run. In fact, his homerless streak extended back to the fifth inning of a game against the Giants on September 7 of the previous season, a span of 92⅔ innings.

San Francisco countered with Joe Gibbon, a 31-year-old lefty acquired from the Pittsburgh Pirates in the offseason, making his first start of the season. Despite having a self-proclaimed “very bad spring [training]” and being labeled by one sportswriter “wilder than an all-night Watutsi,”9 Gibbon provided a reliable bullpen arm through April. In his six appearances, he’d given up only one run in 7⅓ innings, struck out six, and walked no one.

Gibbon gave up a leadoff single to Nate Oliver but still faced the minimum in the top of the first when catcher Bob Barton gunned down Oliver attempting to steal second. Osteen responded with a three-up-three-down inning, capped off by striking out Mays. Gibbon retired the Dodgers in order in the top of the second, but in the bottom of the frame, Osteen ran into trouble.

Ahead 0-and-2 in the count, the veteran southpaw drilled Jim Ray Hart in the ribs with a slider, hitting almost the exact same spot where Drysdale had nailed him the night before. Hart crumpled to the ground in pain as the crowd booed Osteen. As he walked out to check on his player, manager Herman Franks yelled at the pitcher, and some Giants felt it was a message pitch.10

“Anybody in his right mind would know I’m not trying to hit the leadoff man,” Osteen said, dismissing any speculation that it was intentional. “I would just be hurting myself. As it turns out, I did.”11 Hart hobbled down to first, advanced to second when Orlando Cepeda singled to left-center field, and scored on a two-base throwing error by Osteen on a groundball off the bat of Jesús Alou. After returning to the dugout, Hart was sent to the hospital for x-rays and was replaced in the lineup by Tito Fuentes.12

The Giants kept plating runs. Hal Lanier drove home Cepeda on a single to right, advancing to second on Ron Fairly’s throw home. Alou and Lanier both scored on a Jim Davenport single, and Ollie Brown followed that with another that sent Davenport to third. Osteen had been tagged for four runs in one inning,13 double what he’d surrendered in any game thus far in the season.

With two outs and runners at the corners, a buzz of anticipation filled the ballpark as Mays stepped into the batter’s box. With each pitch, flashbulbs exploded, but all photographers would capture was images of Mays striking out to end a second consecutive inning.

Gibbon and Osteen were both perfect in the third and fourth innings. In the fifth, Gibbon allowed a leadoff double to Lou Johnson, the only Dodger who made it past first base all night. Johnson scored when the next batter, Jim Lefebvre, singled. Gibbon pitched a complete game for the win, but his accomplishment was overshadowed by what his teammate did in the bottom of the fifth.

Osteen was poised for another perfect inning after retiring Davenport and Brown, bringing up Mays with two outs for the third time in the night. The lefty wound and delivered his first pitch, a “straight change-up on the outside,” Osteen recounted. “I knew it was gone when I threw it.”14

So did everyone in the dugouts, the press box, and the stands.

The ball sailed 380 feet to the opposite field and a gaggle of fans behind the right-field fence pounced.17 The crowd cheered and celebrated, as did the players. The 22-year-old Lanier, who named Mays as his idol, admitted to being on the verge of tears. “My whole insides were shaking. I got goosepimples all over,” he described.18 Brown regretted not being on base when the historic home run was hit, but called it “an honor to play in the same game.”19

When Willie crossed the plate, he ran to the welcoming arms of his teammates and went into the dugout, but the cheers didn’t stop. The Giants urged him to go back out and acknowledge the fans, so he popped his head out over the top of the dugout and waved, but that wasn’t enough to satiate the 28,220 who were chanting, “We want Willie! We want Willie!”

Mays emerged for a curtain call, tipping his cap to the fans. This, however, distracted many from noticing that Fuentes had rocketed a triple into the right-field corner. The game had gone on despite the ongoing five-minute ovation for Mays.20 That ended Osteen’s night, but Fuentes scored when reliever Bob Miller uncorked a wild pitch, making the score 6-1.

Neither team scored again. Mays batted with two outs in the seventh, and despite grounding out to second, his attitude changed. “That last time up, after the homer,” he shared, “I felt relieved. … What a weight to get off your back.”21

When Willie got to the clubhouse, a cake with “512” on it was waiting. He realized it must have been sitting around for a week and a half, so he posed for the cameras with a stale slice near his mouth, but never took a bite. After the interviews and photo-ops were over, the press cleared out of the locker room and Mays finally got the peace and quiet he’d wanted.

“Now you can relax,” Franks reassured the newly crowned National League home-run king, “until you get to 700-and-something.”22

This article was reviewed by Ray Danner and copy-edited by Len Levin.

In addition to the sources cited in the Notes, the author accessed Baseball-Reference.com, Stathead.com, and Retrosheet.org. Newsreel footage of the home run can be found on the San Francisco Giants YouTube page.

8 The addition of rookie Don Sutton in the fourth spot of the rotation makes Osteen the only regular starter from the 1966 Dodgers not in the Hall of Fame.

10 Hart happened to be the last hitter to belt a home run off Osteen in that game the previous September.

12 X-rays showed no break. Hart was back in the lineup the next day, going 3-for-6 with a run and two RBIs.

13 Albeit, only one of them earned.

17 Teenager Henry Garron Jr. emerged from the scrum with the ball. The Giants, wanting to donate the ball to the Hall of Fame, offered the Garron family $100 and a team-autographed ball. Henry Garron Sr. felt the Giants were lowballing the price, saying, “I think they got a pretty good price for the ball Roger Maris hit for his 61st homer.” Maher, “Willie Gets Homer.” By the time Mays got to the clubhouse, he’d heard rumors that the Garrons were asking $1,000, to which he said they could keep it. Henry Sr. insisted he hadn’t asked for anything, only said the ball was worth more than $100. Mays autographed the ball for the teenager before the Garrons left. Mays later claimed, “I heard the father sold it to some restaurant owner in Sacramento.” Willie Mays and Charles Einstein, Willie Mays: My Life In and Out of Baseball (New York: E.P. Dutton, 1972), 305.

19 Jupiter, “Willie Makes History.” On a similar note, journeyman outfielder Don Landrum was inserted as a defensive replacement in right field for the ninth inning. Landrum, who had pinch run for Stan Musial after his record-breaking 3,431st base hit, just wanted to be a part of the event. “I told Herman, ‘I want in this game, some way. I don’t care where you play me, but I’ve got to get in this game.’”

20 Mays later wrote, “I heard later a stern directive came down after that, when a big event happens, call time, give the fans a chance to salute the player, give him a chance to respond.” Mays and Einstein, “My Life,” 305.