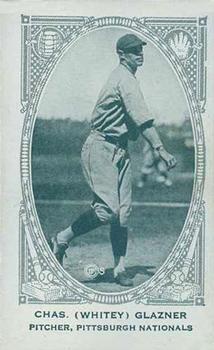 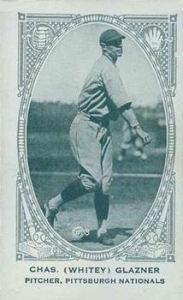 An unheralded addition to the Pittsburgh Pirates’ 1921 Opening Day roster, rookie Whitey Glazner quickly earned a spot in the starting rotation through outstanding relief work. He seized the limelight in the Pirates’ 2-1 win over the St. Louis Cardinals on May 7, limiting St. Louis to four hits in his second major-league start and scoring the game-deciding run in Pittsburgh’s ninth consecutive victory.

As the 1921 Pirates sought to improve on three consecutive fourth-place finishes in the National League, veteran shortstop Rabbit Maranville, acquired from the Boston Braves in an offseason trade, drew the most attention of the team’s newcomers.1 Fans looking for signs of imminent glory could also dream on reports of several Pirates prospects. Preseason headlines and column inches hailed infielders Clyde Barnhart,2 Cotton Tierney,3 and Pie Traynor,4 all promoted from the minors late in the 1920 season.

Mentions of 27-year-old Charles Franklin “Whitey” Glazner were more modest. An Alabama native and veteran of the Great War, Glazner had won 24 games for the Class-A Southern Association’s Birmingham Barons in 1920. The Pirates purchased the right-hander in August 1920; like Barnhart, Tierney, and Traynor, he debuted in the majors a month later.

His first two big-league appearances were in the waning days of the 1920 season, both times entering in relief with Pittsburgh well behind.5 Outside of a Pittsburgh Post reference to Glazner being “one of the greatest pitchers ever developed in [the Southern Association],”6 his name most often appeared, alongside other prospects like Johnny Morrison and Moses Yellow Horse, in lists of pitchers likely to contribute to the Pirates’ staff in 1921.7

Glazner began the season in the bullpen but soon gained manager George Gibson’s trust; on April 29, the Pittsburgh Post reported that he had warmed up in all 13 of Pittsburgh’s games to date.8 Twice in April he contributed long, effective relief outings. In the second of those appearances, on April 25 in St. Louis, Glazner replaced starter Hal Carson in the third inning and pitched the next six innings as the Pirates rallied for a 6-5 win in 10 innings.9

That win was Pittsburgh’s second in as many days. By May 2 the winning streak was five games, and Gibson selected Glazner to start in Chicago. On a chilly, windy afternoon, he pitched the Pirates to a 4-3 win for their sixth consecutive victory.10

The Pirates then returned home for a four-game series with St. Louis. After a rainout on May 4, they rolled to 18 runs and two more wins over the next two days. With eight wins in a row and a 15-3 record, Pittsburgh held first place, three games ahead of second-place Brooklyn. St. Louis, under third-year manager Branch Rickey, had fallen to eighth in the eight-team league with a 3-11 mark.

Some reports had veteran Babe Adams starting Saturday afternoon’s series finale.11 Gibson instead reserved Adams for the next day’s game in Cincinnati, and Glazner made his second major-league start as the Pirates aimed to extend their winning streak to nine.

Glazner took the mound at Forbes Field under ominously dark skies. Aided by rookie Johnny Mokan’s “off the grasstops” grab of Jack Smith’s liner to right, he retired St. Louis in order in the first.12

Rickey sent left-hander Bill Sherdel to oppose the Pirates. The 24-year-old Sherdel was in the early stages of a long tenure as a swingman in St. Louis; this was his first start of 1921 after three relief appearances. With one out in the first, Max Carey drove Sherdel’s pitch off the left-field wall; Austin McHenry, playing deep, held the speedy Carey to a double. After Carey advanced to third on Maranville’s fly out, George Cutshaw hit a smash up the middle, but Sherdel snagged it with his bare hand and threw to first for the third out.13

Cardinals first baseman Jack Fournier batted with one out in the second. Prior to 1921, Fournier had played in eight major-league seasons and hit a total of 18 home runs. The convergence of factors inaugurating the “lively ball” years of the 1920s — adoption of a cork-center ball, abolition of the spitball, removal of damaged balls from play, and sluggers demonstrating the benefits of swinging for the fences14 — were kind to him: Fournier reached double figures in home runs in each of the final seven seasons of his career, beginning with 16 in 1921.

Glazner started Fournier with two slow curves. The third pitch was a fastball; Fournier pulled it high and far into Forbes Field’s right-field bleachers.15 His first home run of the season gave St. Louis a 1-0 lead.

Pittsburgh threatened to draw even in the bottom of the second, when Tierney, batting with one out, drove a triple “against the center-field end of the right-field bleachers.”16 But Sherdel retired Charlie Grimm and Walter Schmidt to strand Tierney at third.

An inning later, the Pirates finally cashed in a runner in scoring position. Carson Bigbee singled with one out. With Carey batting, Bigbee took off for second; Sherdel’s pitch was low and wild, preventing catcher Pickles Dillhoefer from making a throw. Carey fanned for the second out, but Maranville singled to center, driving in Bigbee with the tying run.

When Milt Stock walked and Rogers Hornsby beat out a bunt single, the Cardinals seemed poised to answer in the top of the fourth. Fournier smoked a line drive toward second. For a moment, Cutshaw looked to have a shot at a triple play — but he failed to catch the liner cleanly and had to settle for a force at second.17 Fournier tried to steal second, but Schmidt gunned him down. Glazner struck out McHenry to end the inning.

Sherdel pitched out of a two-on, one-out situation in bottom of the fourth, and then both starters settled down with smooth fifth and sixth innings. Rain started to fall on Forbes Field.

The score remained tied when Hornsby led off the seventh with a fly ball to right. Mokan, starting for the injured Possum Whitted, sprinted into foul territory to make what the Pittsburg Press called the game’s “feature catch.”18 Fournier followed with a single; Glazner attempted to pick him off but threw wildly, allowing Fournier to move into scoring position.

McHenry lined sharply to left, but Bigbee robbed him of a hit with a shoe-top catch. Glazner fanned Doc Lavan to end the inning. The rain now came heavily.

Schmidt started the bottom of the seventh by tapping a grounder toward the mound. Sherdel picked it up and threw it to catcher Dillhoefer, who threw to Fournier for the first out.19 With the rain dropping “in torrents,” Glazner batted.20

Glazner hit Sherdel’s pitch to the opposite field and down the right-field line. Hustling around the wet diamond, he was safe at third with a triple. Glazner gasped for air, breathless from running the bases on his first major-league hit, as Bigbee stepped to the plate.21

Sherdel worked deliberately.22 His first pitch was outside. Another delivery traveled wide of the strike zone. The storm then “broke loose in a fury of wind and rain”; umpire Ernie Quigley stopped play.23

After approximately 20 minutes of delay, the heaviest of the rain passed through and play resumed. Bigbee hit Sherdel’s first pitch into right for a single. Glazner crossed the plate for a 2-1 Pittsburgh lead. The crowd of 20,000 “rose up with a prolonged cheer.”24 The Pirates threatened to expand their advantage, loading the bases with one out, but third baseman Stock’s play to field Cutshaw’s grounder and flip home for the force on Bigbee kept it a one-run game.

Now with the lead, Glazner set down the Cardinals in order in the eighth. Dillhoefer grounded out. Sherdel fanned for Glazner’s sixth strikeout of the game. Smith attempted to bunt for a hit, but Tierney charged from third base and threw him out — making what the Pittsburgh Gazette Times called a “pretty play” — to end the inning.25

After Sherdel pitched a clean eighth, Glazner returned to close out the Cardinals. Burt Shotton, who had entered the game in the sixth inning as a pinch-hitter for Les Mann, grounded to Grimm at first.26 Stock popped up to Maranville for the second out.

Only Hornsby, batting .424 entering the game after his 1920 line of .370/.431/.559 led the National League in all three categories, stood between Glazner and victory. He lined hard to center, but Bigbee backed up and caught the ball near the warning track, ending the game.

The Pirates had a nine-game winning streak and 3½-game lead in the National League, with a scheduled 16-game, five-stop road trip ahead. “There has been nothing phenomenal about the work of the Gibsonians, but there has been a powerful lot of consistency about it, and that is what most pleases their followers,” Ralph S. Davis asserted in the Pittsburg Press.27

Glazner took a regular turn in Pittsburgh’s rotation for the rest of the season; he finished 1921 with a 14-5 record and 2.77 earned-run average.

In addition to the Sources cited in the Notes, the author consulted the Baseball-Reference.com and Retrosheet.org websites for pertinent material and the box scores noted below; game coverage in the Pittsburgh Gazette Times, Pittsburg Press,  St. Louis Daily Globe-Democrat, and St. Louis Post-Dispatch newspapers; and SABR Baseball Biography Project biographies of several players who participated in the game, especially Nelson “Chip” Greene’s biography of Jack Fournier, Darren Gibson’s biography of Whitey Glazner, Gregory H. Wolf’s biography of Bill Sherdel, and Rob Edelman’s biography of Burt Shotton. The author thanks SABR members Gregory H. Wolf and Jack Zerby for their feedback on earlier drafts of this article and Joseph Wancho for fact-checking the article.

8 Edward F. Balinger, “Evers and His Bruins Are Due to Play Pirates This Afternoon: Scrap Is Assured When Cubs Tackle Buccaneers Today,” Pittsburgh Post, April 29, 1921: 12.

26 Shotton, at age 36 just three years younger than Rickey, was playing on a Rickey-managed team for the second time in his career. He was with the St. Louis Browns when Rickey had his first managerial job, from 1913 to 1915. Their relationship extended beyond Shotton’s playing career. Most notably, when Rickey was general manager of the Brookyn Dodgers in 1947 and Commissioner Happy Chandler suspended Dodgers manager Leo Durocher on the eve of the season, Rickey hired Shotton to manage the Dodgers. Shotton served as Brooklyn’s manager in 1947, and also from midseason 1948 through 1950.