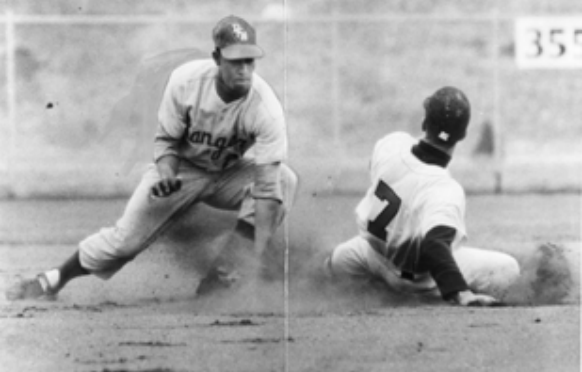 If there was ever a game where one team had an advantage over the other, it would have been the May 8, 1960, contest between the hometown Minneapolis Millers and the visiting Louisville Colonels at Metropolitan Stadium. The Colonels went into the doubleheader with the Millers at 12-7 and were only a half-game behind the first-place Houston Buffs in the American Association standings. Five of Louisville’s wins had come against Minneapolis, which had yet to beat the Colonels. At 8-11, Minneapolis was tied with Indianapolis, and both were only a game better than the last-place Charleston Senators.

The Millers, Triple-A affiliate of the Boston Red Sox, had a habit of shooting themselves in the foot whenever they played the Colonels, the Milwaukee Braves’ Triple-A affiliate, committing 15 errors in four games, and they did it again in the first game of the doubleheader when they made five more miscues in a 7-4 loss. Making matters worse was that they blew a late 4-1 lead by allowing three runs in the eighth inning and three more in the ninth. The latter trio came after third baseman Marlan Coughtry dropped a perfect throw by center fielder Dave Mann that would have gunned down the runner and given the Colonels a runner at second with two outs.

Instead, Tracy Stallard intentionally walked Joe Morgan to load the bases and set up a force, but Earl Hersh singled over the drawn-in infield to score two, and Morgan scored the third run of the inning on Hawk Taylor’s sacrifice fly. The Millers’ highlight came in the bottom of the seventh when Mann doubled and was sacrificed to third by Chuck Schilling, and Carl Yastrzemski was intentionally passed. With Stu Locklin at the plate, Mann, a journeyman speedster, took off for home and Yastrzemski lit out for second. While the Colonels focused on Mann, Yastrzemski continued to third and got credit for two stolen bases on the play.1

In addition to sloppy play, the Millers’ offense had stalled and their four runs in the first game gave them only six in three games heading into the second game of their doubleheader with Louisville.

Starting for the Millers was 24-year-old, 6-foot-6 prospect Don Schwall, a former basketball star at the University of Oklahoma whom the Red Sox lured away from Oklahoma with a $65,000 bonus in 1957.2 Schwall followed a 7-5 rookie season with Waterloo of the Class D Midwest League in 1958 with a breakout campaign in which he went 23-6 with a 3.36 earned-run average in 30 games with Alpine of the Class D Sophomore League in 1959. Promoted to Minneapolis in 1960, the righty fireballer was 1-2 going into his fourth start of the season.

Louisville sent right-hander Don Nottebart to the mound to face Schwall. Like Schwall, Nottebart was a 24-year-old former high-school star, but he signed with the Braves right out of high school and had been pitching professionally since he was 18. The Massachusetts native, who grew up idolizing Braves legend Warren Spahn and fancied himself a right-handed version of his idol, had all the makings of a star.3 After a rocky start following his high-school graduation in 1954, Nottebart fashioned three straight 18-win seasons from 1955 to 1957, moving his way up each year from Class D Wellsville to Class B Evansville to Double-A Atlanta.

After a dismal 1958 with Triple-A Wichita of the American Association, Nottebart enjoyed his fourth 18-win season in five years, going 18-11 for Louisville in 1959. Having won three of his first four decisions in 1960, Nottebart went into his May 8 start against the Millers boasting a minor-league record of 87-52.

Little did he know he would run into an unexpected buzz saw that sent him back to the dugout not long after he left it. Mann started the onslaught with a checked-swing blooper that dropped safely inside the right-field line, and he sped around the bases for a leadoff triple. Schilling sent Mann home with a sacrifice fly to left to stake the Millers to a 1-0 lead, then Yastrzemski walked and went to second on a single by Locklin.

Bob Lawrence singled Yastrzemski home with the Milleers’ second run and Walter Brady followed with a hit to center that plated Locklin and sent Nottebart to the showers. Louisville skipper Ben Geraghty turned to bespectacled right-hander Howie Koplitz, a Wisconsin native who signed with the Detroit Tigers out of high school in 1956 and was in his first season with the Colonels. Koplitz’s day was even shorter than Nottebart’s, and he left the game after walking Coughtry and Jim Mahoney, forcing in Lawrence with the fourth tally of the frame.

That brought Frederico “Chi-Chi” Olivo into the fray. Olivo had spent much of his 20s playing in his native Dominican Republic and in Puerto Rico before signing with the Braves in 1955 at the age of 27. Olivo kicked around the minors and found some success with Class A Jacksonville in 1957, going 16-12, and pitching to a 15-11 record and a 2.64 ERA in 1958. Olivo began the 1960 season with Double-A Austin of the Texas League and went 2-1 in eight games before moving up to Louisville.

Olivo had already come through in his first appearance for the Colonels when he tossed two scoreless innings in the first game of the doubleheader to earn the win. Nevertheless, not only did he fail to stop the first-inning bleeding, he contributed to it. Schwall dropped a squeeze bunt in front of the mound and Olivo’s errant throw got past catcher Bob Uecker for a two-run error that also sent Mahoney to third and Schwall to second.4

Mann tallied his second hit of the inning and plated Mahoney and Schwall to extend the Millers’ lead to 8-0, then Mann stole second and scored the ninth run of the inning on Yastrzemski’s single to center. The Colonels finally got out of the inning, but the hole they dug was too deep to escape from. Of course, that didn’t stop the Millers from lending a hand by committing more errors.

In the top of the fifth, Mahoney booted Amado Samuel’s grounder,and Locklin dropped Taylor’s fly to right for a two-base error that put Colonels on second and third. Mahoney made his second error of the inning when he threw wildly to first after corralling Howie Bedell’s grounder and Samuel scored to give Louisville its first run of the game. Mahoney then started a 6-4-3 double play, but Taylor crossed the plate to make the score 9-2.5

The Millers scored their 10th run of the game in the sixth, only the second time in the season they had reached double digits, thanks in part to the Colonels’ comedy of errors.6 Yastrzemski’s second hit of the game, two fielder’s-choice outs, an error, a walk, and a wild pitch increased Minneapolis’s lead to 10-2. Schwall completed the seven-inning game without allowing a run in the top of the seventh and evened his record at 2-2 with the victory.7

1 Dave Mann began his professional career in 1952 at 19 and played for four different franchises before joining the Boston Red Sox’ Triple-A team in 1960. He was coming off seasons in 1958 and ’59 in which he stole 66 and 65 bases, respectively, and he finished the 1960 season with 50. The May 9, 1960, Minneapolis Star (Page 33) and Louisville Courier-Journal (Page 19), and the May 18, 1960, edition of The Sporting News (Page 30) either reported or listed in their box scores that Yastrzemski had two stolen bases on the double steal. The Minneapolis Tribune (Page 25) listed in its box score that he had one.

4 The Louisville Courier-Journal reported that Olivo’s throw got past catcher Hawk Taylor, but Taylor didn’t enter the game until he pinch-hit for Olivo in the fifth inning.

5 With nine more errors in the doubleheader, the Millers ran their total to 24 miscues in their first six games against Louisville.

7 Minor league doubleheaders at the time typically featured a nine-inning game and a seven-inning game, but not always in that order and some went a full nine innings and beyond. For instance, Charleston and Buffalo met for a doubleheader the same day Minneapolis played Louisville and the first game went 10 innings before Charleston scored the winning run. Regardless of extra innings, the teams played all nine innings in the second game as well.