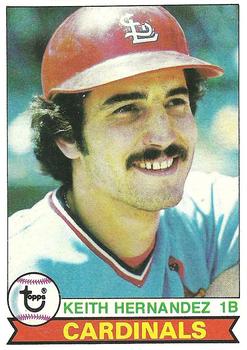 For Keith Hernandez, some reassuring words from his manager, Ken Boyer, at 30,000 feet proved significant to his career course.

The St. Louis Cardinals were flying to Houston to open a three-game series against the Astros on May 8, 1979. Hernandez, their first baseman and number-three hitter, was batting a gloomy .236. And that figure had been boosted by a 3-for-4 showing in St. Louis’s most recent game, a 4-2 victory over the Pittsburgh Pirates that pushed the Cardinals above the .500 mark with a 13-12 record.1

The 25-year-old Hernandez, in his fourth full season in the major leagues, was coming off a pedestrian .255 average in 1978, during which the Cardinals finished 69-93, suffering their most losses since 1916.2

“[Boyer] came back to me on the plane and said, ‘You’re my first baseman. You’re my third hitter. I’m going to keep my job or lose my job with you. I know you can play. Just relax and go play,’” Hernandez recalled nearly 40 years later. “Boyer was my guardian angel. The Cardinals were beginning to have doubts whether or not I was going to get it done – live up to what they thought I could be. Boyer had seen me play at [Double-A] Tulsa for two years when he managed there and he knew what I could do.”3

In the first game after the supportive session, Hernandez went 4-for-4 – raising his average to .264 – as the Cardinals won, 4-1, at the Astrodome. The left-handed swinger doubled in the first inning and singled in the fourth, sixth, and eighth – all against Houston right-hander Ken Forsch.

“That was a critical moment in my career,” Hernandez said. “The right person [Boyer] being there at the right time for me. There was just some destiny. I could have gone either way.”4

By month’s end Hernandez was batting .301, and he went on to win the National League batting crown with a career-best and major-league-leading .344 average.5 He also topped the league with 116 runs and 48 doubles, to go with 11 triples, 11 home runs, 105 RBIs, and 11 stolen bases en route to being voted the NL co-Most Valuable Player with first baseman Willie Stargell of the Pirates.6

While Hernandez’s story would prove to have historical significance, the immediate narrative that Tuesday night involved Cardinals right fielder George Hendrick. With the game tied, 1-1, in the eighth, Hendrick blasted a game-winning two-out, three-run homer off Forsch to deep left field.

After Garry Templeton and Jerry Mumphrey grounded out, Hernandez singled and Ted Simmons walked. Hendrick followed with his second home run of the season, the exclamation point of a 3-for-4 performance that raised his batting average to .310. Like Hernandez, Hendrick was slow out of the gate, batting .244 with one homer and two RBIs through the first 16 games.7

“George has a little viper in him, doesn’t he,” Simmons said after the game. “He’s a good hitter. When a guy’s a good hitter, it’s not something you worry about [if he is slumping]. It’s only a matter of time until a good hitter presents himself. And a good hitter, unlike a bad hitter, will present himself for a couple of months at a time.”8

Houston took a 1-0 lead in the fifth against Cardinals starting pitcher Pete Vuckovich. Bob Watson singled leading off and advanced to second on a sacrifice by Rafael Landestoy and to third on a balk. After Vuckovich struck out Bruce Bochy, Forsch helped himself with an RBI single to right. It was the Astros’ lone hit in eight at-bats with runners in scoring position, and they stranded 10 runners on base.

The Cardinals tied it on a two-out pinch-hit home run by Dane Iorg in the seventh. The ball ricocheted off the facing behind the right-field wall as Iorg hurried around the bases with his first career round-tripper, in his 188th at-bat.

“I was a little bit too excited,” Iorg said. “I’ll get some more [homers], and I’ll get my trot down. “I thought I hit mine good until I saw George smoke it.”9

Vuckovich worked 7⅔ innings, scattering eight hits (all singles) with no walks and three strikeouts. He earned the win and improved to 3-2 while dropping his ERA to 2.03, third-best in the NL.

“All I want to do is do my damnedest and take a hike when it’s all over,” Vuckovich said.10

After back-to-back two-out singles by Jose Cruz and Enos Cabell in the eighth, Boyer replaced Vuckovich with Mark Littell, who snuffed out the potential rally by getting Watson to ground out to shortstop.

In the ninth Littell gave up a leadoff infield single to Julio Gonzalez and waked Denny Walling with one out. Darold Knowles relieved and retired the final two batters, Terry Puhl on a popup to third and Jeff Leonard on a groundout to third, to earn his team-leading third save and wrap up the 2-hour, 23-minute affair.

Houston, which entered play atop the NL West Division with a 17-11 record – a game and a half ahead of the Cincinnati Reds – lost for just the second time in 10 home games before a crowd of 15,645. In defeat, Forsch pitched his league-leading fifth complete game in seven starts while falling to 3-2 despite a 2.67 ERA. He had won his last 10 decisions at the Astrodome, dating to September 1977.

The Cardinals and Astros spilt the remaining two games of the series – Houston winning the second game, 5-4 in 16 innings, and St. Louis taking the finale, 3-1 – with Hernandez going 2-for-4. In a unique bit of scheduling, the three games in Houston were sandwiched between homestands of seven and six games for the Cardinals.

In June Hernandez credited his wife, Sue, and teammate Lou Brock, playing in the final season of his Hall of Fame career, for helping with his mental approach to the game, and his father, John, for suggesting he move his hands farther away from his body. It all added up to a hot streak “kind of beyond my wildest dreams,” said Hernandez, who batted .373 for the month and subsequently was selected to his first All-Star Game.11

Both St. Louis and Houston finished with significantly better records than in 1978 – the Cardinals winning 17 more games (86-76) and the Astros 15 more (89-73). St. Louis wound up third in the NL East, 12 games behind the eventual World Series champion Pirates, while Houston placed second in the NL West, merely a game and a half behind Cincinnati.

Hernandez narrowly missed repeating as the NL batting king in 1980; his .321 average was second to Bill Buckner of the Chicago Cubs (.324).

1 Technically, the Cardinals were 13-12-1, having had their April 8 game against Philadelphia suspended by rain in the bottom of the sixth inning with the Phillies leading, 3-2. It was replayed from the beginning on July 29, and the Phillies won, 8-7.

4 “Keith Hernandez’s Star Was Rising 40 Years Ago with Cardinals.”

5 Hernandez took over the NL batting lead on August 10 with a .338 average and held it for the balance of the season. His season-high mark was .349 through games of September 6. Pete Rose of the Phillies finished runner-up for the crown with a .331 average.

7 Hendrick began the season as the Cardinals’ center fielder before asking manager Ken Boyer to switch him with right fielder Tony Scott on April 24. Boyer agreed and, coincidentally or not, Hendrick proceeded to bat .381 (16-for-42) in his first 11 games in right, culminating with the May 8 game in Houston.