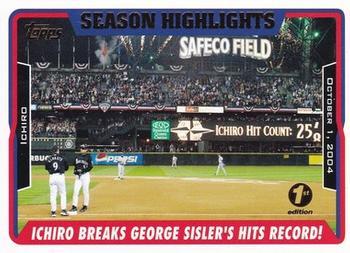 The major-league record for hits in a season has a long, and interesting, history. The first player to exceed 200 hits was Canadian Tip O’Neill in 1887. O’Neill’s record of 225 hits with the St. Louis Browns stood for seven years before Hugh Duffy put up 237 hits for the Boston Beaneaters in 1894. Just two years later, Jesse Burkett of the Cleveland Spiders broke Duffy’s record with 240 hits in 1896.

But Cobb’s mark stood for only nine years before George Sisler got 257 hits in 1920. Even though baseball was shifting from the Deadball Era—thanks to factors including the adoption of a cork-center ball, abolition of the spitball, and removal of damaged balls from play—Sisler had to play in every one of the St. Louis Browns’ 154 games, bat .407 for the season, and get 60(!) hits in 29 games in June and 57 hits in 30 games in September to break Cobb’s record.

Nine years after Sisler’s record-setting season, Lefty O’Doul of the Philadelphia Phillies finished 1929 three hits short of the record; Bill Terry of the New York Giants also had 254 hits in 1930. It then took until 1985 for Wade Boggs of the Boston Red Sox, playing a 162-game schedule, to become the next player with as many as 240, and another 15 years until Darin Erstad of the Anaheim Angels also reached 240.

In 2001, the season after Erstad’s big year, Ichiro Suzuki, a veteran of nine seasons with the Orix Blue Wave in the Japan Pacific League, debuted with the Seattle Mariners at age 27. He had an astonishing season, winning the American League batting title and stolen-base crown and receiving MVP and Rookie of the Year honors. His distinctive lefty swing produced 242 hits—the most by any player since Terry’s 254 in 1930 and only 15 fewer than Sisler’s record.

Ichiro’s shot seemed to be slipping away with just seven hits in his next 10 games. But he rallied for 13 hits in the following four games, raising his total to 249 with nine games to go.

The next six games yielded seven more hits. Ichiro’s count was 256, more than O’Doul, Terry, and everyone else in major-league history but Sisler. The stage was set for Mariners game number 160, Ichiro’s 159th of the season, on October 1, at Safeco Field in Seattle.

Although the Mariners had won an AL record 116 games in 2001 and still had stars like Ichiro and Edgar Martinez in 2004, they struggled to a 62-97 record and were in last place in the AL West as the season’s final weekend began.

The visiting Texas Rangers, in third place, had an 87-72 record, and had been eliminated from playoff contention.1 The Rangers turned to 14-game winner Ryan Drese. The Mariners countered with Ron Villone, who was 7-6 for the campaign.

Even though the game was meaningless for the Mariners as a team, Safeco Field was sold out. George Sisler’s daughter, 81-year-old Frances Sisler Drochelman, born two years after Sisler set the hits record in 1920, was one of the 45,573 fans at the game. She, like most of the crowd, had come for the chance to witness history. (Ichiro later returned the favor by visiting George Sisler’s grave in St. Louis when he was there for the 2009 All-Star Game.2)

When the Rangers came to bat in the first, Villone struggled with his control and walked the first batter he faced, Eric Young Sr., on five pitches. But he struck out the next two batters, bringing the Rangers cleanup hitter, switch-hitting Mark Teixeira, to the plate.

Teixeira, having an excellent sophomore campaign, had already blasted 37 home runs. He added to his total by pulling Villone’s fourth pitch to him over the left-center-field wall. The 24-year-old Teixeira became the youngest switch-hitter in history to hit 38 home runs. His shot put the Rangers ahead 2-0.

Ichiro’s first chance to tie the record came when he led off the first for the Mariners. He didn’t waste that opportunity. With the count at 0-and-2, he pounded a groundball the opposite way that bounced over third baseman Hank Blalock’s head. His 257th hit of the season tied him with Sisler for the record. Ichiro tipped his hat to the crowd in response to the fans’ ovation.

Randy Winn sent Ichiro to second with a single. After Edgar Martinez, playing in the final season of his Hall of Fame career, popped up, Raul Ibanez loaded the bases with the third hit of the inning. But the Mariners could not capitalize; Bret Boone grounded into a double play to end the inning.

With the score still 2-0, Ichiro led off the third. Working the count to 3-and-2, he slapped a groundball to the left of second base and through the infield for his record-breaking 258th hit of the season.

The game paused as Ichiro, with a broad smile on his face, received a standing ovation, while his teammates came onto the field to congratulate him. He tipped his hat to the crowd and greeted Frances Drochelman at her seat on the first-base line.

It’s possible that the delay in the game to celebrate Ichiro’s achievement caused a problem for Drese, as he did not record an out after Suzuki’s hit. The next five batters—Winn, Martinez, Ibanez, Boone, and Jeremy Reed—hit safely, which scored four runs, before Rangers manager Buck Showalter sent right-hander John Wasdin to the mound with men on first and second and none out.

Wasdin promptly gave up the Mariners’ seventh consecutive hit, a single by Greg Dobbs, driving in Seattle’s fifth run of the inning. Dan Wilson’s groundout drove in another run. The Mariners eventually batted around as Ichiro was the first, and last, batter of the inning, and Seattle led 6-2 going into the fourth inning.

Villone, who had thrown 87 pitches in five innings to become eligible for a win, was replaced by third-year setup man Julio Mateo in the top of the sixth. Mateo induced the three Rangers he faced to fly out.

In the bottom of the inning, Wasdin retired the first batter he faced before Ichiro recorded his third hit of the game by beating out a groundball to short. Winn walked, bringing Martinez to the plate.

When the count got to 3-and-2, Mariners manager Bob Melvin put both runners in motion with a double steal. Martinez struck out swinging, but catcher Ken Huckaby’s throw to third hit the dirt and got by Blalock for an error. Ichiro scored for a 7-2 Seattle lead.

The teams traded runs in the eighth. Blalock scored an unearned run for Texas in the top of the inning. In Seattle’s half, Martinez singled with one out for the 2,247th and final hit of his 18-season career. Two batters later, Boone’s single drove in pinch-runner Jolbert Cabrera, restoring the Mariners’ five-run advantage.

Rookie right-hander J.J. Putz came in to pitch the ninth inning for the Mariners. He allowed an infield hit but a double play erased both runners. In another gesture of respect for Ichiro’s achievement, with one out to go, Melvin sent Hiram Bocachica to right field as a replacement for Suzuki. This afforded the fans one more opportunity to give Ichiro a standing ovation for breaking the record. Ichiro tipped his hat to the crowd as he ran to the dugout. Putz retired Adrian Gonzalez on a fly ball to end the game.

It was evident that Ichiro was glad that the pressure of the chase was over. After the game he said, “It was a big relief. I felt like something got off my shoulders. To see the fans and to see my teammates, it was just a very exciting time for me. It was a very special moment, definitely the highlight of my career.”

His father, Nobuyuki, who had practiced baseball with Ichiro for years when Suzuki was growing up and was watching in Japan, said, “You can tell how happy and proud I am just by looking at me. The tears just won’t stop flowing.”3

My sincere thanks to John Fredland for his careful reading of the first draft of this article. His suggestions improved the final product significantly. The article was fact-checked by Ray Danner and copy-edited by Len Levin.

I wrote an account of this game as an offshoot of my SABR biography of Ichiro written for the Biography Project.

4 Ichiro’s 2004 campaign was truly a season for the ages. In addition to setting the hits record, he became the first player to get 200 hits in each of his first four years in the major leagues. His 924 hits in those four years are the major-league mark for most hits in any four-year span. His 225 singles are the major-league record, and his 80 multihit games set the club record. He got 50 hits in a month three times (50 in May, 51 in July, 56 in August) and was the first player since Pete Rose to have four 50-hit months. (Suzuki also had 51 hits in August 2001.) He got five hits four times and led the majors with 57 infield hits. He set career highs in batting average (.372, which also led the majors), OBP (.414), and OPS (.869). He stole 36 bases and had a career-high four steals against Boston on July 20. He also earned his fourth straight All-Star appearance and fourth straight Gold Glove Award.