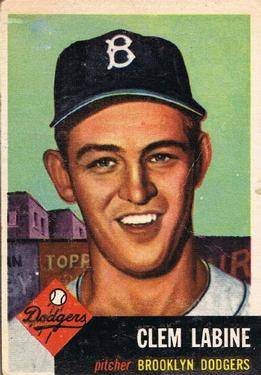 “Dressen first saw this boy in Boston in 1944 when a group of boys came to Braves Field for a tryout. Charlie liked him then and the club (Brooklyn) signed him.” – Brooklyn scout John “Red” Corriden, speaking about Clem Labine, October 2, 19511

He would ultimately become known as the man with the rubber arm but, on this day Clem Labine was a relatively unknown rookie whom manager Chuck Dressen of the Dodgers had chosen to save the Dodgers from elimination in their best-of-three playoff with the New York Giants for the National League pennant. Labine had been called up from St. Paul in July, and his Dodgers contract called for a stipend of $5,000 per year. The hopes of the Dodgers were being pinned on a man who would be paid $38.50 for that day’s work.2 Labine pitched a six-hit shutout as the Dodgers won, 10-0, to force a decisive third game at the Polo Grounds.

The second game was played at the home of the Giants, the Polo Grounds, and the fans hoped to see their heroes win the National League pennant. Overcast skies and threatening weather conditions kept the crowd down to 38,609.

Labine shared the spotlight with Jackie Robinson, whose first four appearances in New York had been as a member of the Kansas City Monarchs in 1945. Robinson’s first-inning homer, on the first pitch to him after a leadoff single by Pee Wee Reese and Duke Snider’s strikeout, gave the Dodgers a 2-0 lead before the Giants had an opportunity to bat. The homer barely made it over the 315-foot sign in left field. It came off the Giants starter, Sheldon “Available” Jones, whose career was on a downward spiral at the relatively young age of 29. Going into the game, his record for the 1951 season was 6-10, after a combined 44-36 record over the prior three seasons. His major claim to fame was having led the National League in hit batsmen for two consecutive years (1948-1949).

In the top of the third inning, the day’s brouhaha (what’s a Dodgers-Giants game without a good argument?) took place. A one-out walk to Snider and a single by Robinson put runners on first and second and occasioned a visit by Giants manager Leo Durocher to the mound to remove Jones from the game. The new Giants pitcher was George Spencer. After Andy Pafko popped out, Gil Hodges hit a grounder back toward Spencer. Spencer’s throw to Whitey Lockman at first base hit Hodges and bounded about 10 feet away. Snider rounded third and raced toward home but Lockman retrieved the ball and gunned out the Duke at home, catcher Wes Westrum applying the tag.

Dodgers coach Cookie Lavagetto and manager Dressen got into a heated exchange with umpire Larry Goetz after Snider was ruled out, Goetz saying that he never touched home plate. After the game Dressen noted that “Snider did a hook side and one of his feet touched the base, but the other didn’t. Goetz looked at the wrong leg – the one off the base.”3

The Giants mounted threats in three consecutive innings against Labine but came up empty. In the second inning with one out, the Giants threatened as Bobby Thomson doubled and Willie Mays had an infield hit. They were left stranded.

An inning later, the Giants loaded the bases on an error by Reese, a single by Don Mueller, and a walk to Whitey Lockman. With two out and the count full, Labine got Thomson lunging after a wide curve for a strikeout to end the inning. In the fourth inning, with two out, Spencer and Eddie Stanky singled. Al Dark’s liner was snatched by Billy Cox at third, and that threat died. After that, the Giants had little in the way of offense, and not a runner got past first base.

In the top of the fifth inning, the Dodgers extended their lead to 3-0 when Snider’s double was followed by an RBI single by Robinson, giving Jackie three hits and three RBIs – and the game was only in the fifth inning. 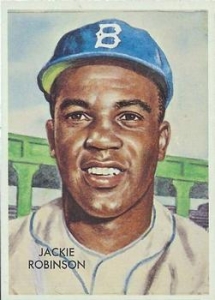 In the top of the sixth inning, the umpires ordered the lights turned on as dark clouds assembled in the skies above the ballpark in Harlem, and the Dodgers broke the game open with three runs. Hodges led off the inning with a homer, his 40th of the season. Cox then hit a liner that third baseman Thomson knocked down. Bobby’s throw to first base was wild and Cox wound up at second on the error. A fly out by Rube Walker advanced Cox to third, bringing up Labine. Dressen ordered a suicide squeeze. Spencer’s pitch went wide of the plate and Labine could not reach it with his bat. The Giants had Cox in a rundown between third and home. The ball eventually wound up in the glove of Spencer and when he attempted the tag, Cox jarred the ball loose and scampered home with the Dodgers’ fifth run.

Labine then walked, and Carl Furillo lined out for the second out of the inning. The rains then came and suspended play for 41 minutes. After the game resumed, Reese singled off Spencer, advancing Labine to third base. Clem scored on a single by Snider to make the score 6-0.

After sending up a pinch-hitter, Bill Rigney, for Spencer in the bottom of the sixth, the Giants brought in Al Corwin to pitch and his first throw in the seventh inning was hit over the left-field wall by Andy Pafko, his 30th of the season, bringing the score to 7-0. Hodges drew a walk and after Cox lined out to left field, Walker singled to center field. Mays misplayed the ball and Hodges scored from first base. Walker wound up on second. The error by Mays was the fifth by the Giants in the game. Three of the Dodgers runs to that point were unearned.

In the bottom of the seventh inning, Robinson topped off his great day with a fielding gem. He raced from his second-base position to the other side of the bag to grab a soft liner. In the same inning, two late-arriving pigeons positioned themselves in the Dodgers infield so as to get an up-close view of Jackie Robinson. Robinson chased them away, but they came back some time later (they were not on the field when the Dodgers were at bat) and positioned themselves near Gil Hodges. They helped themselves to a meal, on the sod behind Hodges, doubtless knowing of the fielding wizardry of the Dodgers first baseman.4

The Dodgers completed the scoring with two ninth-inning runs. With two out, Cox walked and came home on Walker’s homer, “the longest home run I ever hit in my life,” he said.5 It was Rube’s third hit of the game. He had proved to be more than an adequate replacement for Roy Campanella, who sat out the game with a bad leg.

The Dodgers win snapped a Giant win streak of eight games. They had won the last seven games on the schedule and won the first playoff game before succumbing to Labine and Robinson.

The Dodgers, if they could win Game Three of the playoff the following day, would head to Yankee Stadium for the first game of the World Series. Robinson had first appeared at Yankee Stadium on June 17, 1945, in a 3-1 Kansas City Monarchs win over the Philadelphia Stars. In that game his seventh-inning single ignited a rally that accounted for all of his team’s runs.7 He next appeared there on August 12, 1945, going 2-for-3 and doubling in a run in the seventh inning when the Monarchs defeated the New York Black Yankees, 4-1.8

Robinson’s first appearances in Brooklyn had also been in 1945, with the Monarchs on June 22 and August 15 at Dexter Park against the Bushwicks. In June he went 3-for-4 with a pair of doubles and an RBI, accounting for all of his team’s runs in a 4-3 loss to the Bushwicks.9 In August he went 2-for-5 in a 9-3 win.10 By the end of August, Robinson was back in Brooklyn for his first meeting with Branch Rickey.11 In October he was back at the Dodgers offices to sign his first contract with the Dodgers.

As for Bobby Thomson, who struck out against Labine with the bases loaded in the bottom of the third inning, tomorrow would be another day.

The next day, at the Polo Grounds, the Giants won, 5-4, and advanced to the World Series.

In addition to Baseball-Reference.com and the sources cited in the Notes, the author used: