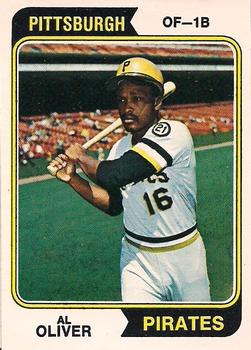 A divisional title turning on a dropped third strike with two outs in the ninth inning of the last game of the season sounds like a baseball fan’s dream. But as that drama unfolded in Pittsburgh on Wednesday night, October 2, 1974, it threatened to become a nightmare for the fans, the players, and the sport of baseball.

Earlier in 1974 it had not appeared as if the Pittsburgh Pirates would be in a title chase. The team got off to a disappointing start and was 37-49 and near the bottom of the National League East Division as late as July 14. Fortunately for the Pirates, nobody in the division was playing much over .500. The divisional race remained open. The Pirates righted their ship in late July and August and battled the St. Louis Cardinals for first place all through September.

At the end of the day on Sunday, September 29, Pittsburgh and St. Louis were tied for first with 85-74 records, with three games left in the season. The Cardinals traveled to Montreal for their last three games; the Pirates hosted the Chicago Cubs. On Monday the Pirates and Cardinals both won. On Tuesday the Pirates won 6-5 on a two-run pinch-hit home run by Bob Robertson in the eighth inning, while the Cardinals lost to Montreal, 3-2. On Wednesday, a Pittsburgh loss and a St. Louis win would result in a divisional tie and force a tiebreaker game; any other outcome would leave Pittsburgh the division champion.

Both teams were scheduled to start at 7:30 Eastern time on Wednesday, but there would be no scoreboard-watching in either Pittsburgh or Montreal. The Cardinals-Expos game was rained out early. If Pittsburgh won on Wednesday, the division was theirs; otherwise, the Cardinals and Expos would make up their game on Thursday, followed, if the Cardinals won, by a tiebreaker on Friday.

Conditions were dry in Pittsburgh, but the game-time temperature was only 38 degrees, which held attendance to 22,725. Pittsburgh started Jim Rooker, 15-11 with a 2.78 ERA. The last-place Cubs started workhorse Rick Reuschel, 13-12 over 231 innings with a 4.39 ERA.

Rooker struggled in the first inning, and the Cubs took a 1-0 lead on a walk to Rick Monday and singles by Don Kessinger and Jose Cardenal. Then the Pirates defense faltered. Third baseman Richie Hebner made a poor throw for an error on a potential double-play groundball. Second baseman Rennie Stennett knocked down but couldn’t pick up a hot smash that was scored as a hit, and Richie Zisk could only trap a sinking fly ball in shallow right field.1 By the end of the inning, the Cubs led 4-0.

The Pirates came back with one run in the third on an RBI groundout by Hebner, and thought they had another in the fourth when Zisk appeared to have scored on a fly ball. Plate umpire John Kibler instead called Zisk out, ending the inning. When the Cubs took the field in the top of the fifth, fans vented their anger with a shower of glass bottles. The game had to be paused while the grounds crew cleaned up the debris.2

The Pirates scored again in the bottom of the fifth on an error by Reuschel, cutting their deficit to 4-2. Meanwhile, the crowd got rowdier and resumed raining potentially deadly missiles onto the field. During the seventh-inning stretch, a bottle landed on the Cubs dugout roof and bounced into foul territory. Umpire crew chief Shag Crawford ordered Pirates public-address announcer Art McKennan to broadcast an appeal for calm. McKennan did so, adding that continued misbehavior might result in forfeiture of the all-important game. Crawford said afterward that to that point he had not raised the specter of a forfeit,3 but that the idea was plausible. Baseball had witnessed a forfeit earlier in the 1974 season due to drunken fans at Ten Cent Beer Night in Cleveland.

For the time being, all continued well for Chicago, as Reuschel cruised through the seventh and eighth and the Cubs held their 4-2 lead. All did not continue well with the crowd as the rain of projectiles intensified. Cubs manager Jim Marshall pulled his players off the field out of fear for their safety in the eighth inning, and the Cubs discussed whether they should resume play at all.

Rick Reuschel said that he asked right fielder Jerry Morales, “Do you still want to go (back) out there?” Morales said, “For you, I will. You are pitching a good game.” When the Cubs did return to the field, the outfielders were wearing batting helmets.5

Dave Parker batted for shortstop Frank Taveras and hit a shot that caromed off Reuschel’s glove to second baseman Rob Sperring. Sperring made a barehanded pickup and barely threw out Parker, with Dilone scoring and Sanguillen advancing to third.

With Pittsburgh trailing 4-3, two outs, and a runner on third, manager Danny Murtaugh called on Bob Robertson to pinch-hit for pitcher Dave Giusti. Robertson had been Pittsburgh’s regular first baseman for most of the season, but had been hobbled by a leg injury and reduced to pinch-hitting for the last two days. He had won the previous night’s game with a pinch-hit home run. Could he deliver again?

Robertson worked a full count and then swung and missed at a curveball. Catcher Steve Swisher failed to corral the pitch, and it bounced about 20 feet from the plate. With Robertson slowed by injury, Swisher had time to retrieve the ball and throw him out. But the ball rolled behind Swisher and to his left, directly in line with the foul line, the batter, and first base.6 Swisher had no good angle for his throw. His throw hit Robertson and deflected into right field, and Sanguillen scored the tying run with Robertson reaching second. The official scorer charged Swisher with both a passed ball and an error.

Cubs manager Marshall argued that Robertson had been running inside the foul line and should have been called out for interference. He lost the argument, but his presence on the field provoked yet another shower of bottles, and the Cubs again had to take shelter while the grounds crew cleared the field.

By now, umpire Crawford was livid and told Danny Murtaugh, “I’m at the end of the line. I’m about to forfeit this thing.” Murtaugh and several Pittsburgh players walked around the field, signaling and pleading for the barrage to stop.7 The appeal may have had an effect, or perhaps the “fans” had run out of bottles. The game resumed and there were no further delays.

Reuschel retired Rennie Stennett on a tap back to the mound, and the game went into extra innings. Pittsburgh reliever Ramon Hernandez retired the Cubs in the top of the 10th. In the bottom of the inning, Al Oliver tripled with one out. Marshall ordered two intentional walks, then brought in Oscar Zamora to face Manny Sanguillen with the bases loaded. Sanguillen dribbled a roller toward third. Third baseman Bill Madlock had no choice but to attempt a barehand pickup while twisting his body to throw to the plate for a force out. He came up empty, Oliver scored, and the Pirates won the game 5-4 and with it the division title.

The Cubs were jostled and harassed as they jogged off the field while fans were rushing onto it.8 The Cardinals glumly boarded their team bus and went home. The Pirates had a division title to celebrate. “It’s been freaky as hell this year. No reason for this game to be any different,” said Robertson. “That may have been the biggest strikeout of my life.”9

The Cubs and the umpires were more interested in discussing the ballpark ambience. Umpire Crawford called it “the worst I’ve ever seen.”10 Cubs outfielder Jose Cardenal said, “We were lucky to get out alive.”11 Perhaps Pittsburgh sportswriter Bill Christine put it best: “Winner, Ramon Hernandez. Save, Shag Crawford. Loser, Pittsburgh’s reputation as a good sports city.”12

The favored Los Angeles Dodgers dispatched the Pirates three games to one in the National League Championship Series.

In addition to the sources cited in the Notes, the author consulted the Baseball-Reference.com and Retrosheet.org websites for pertinent material and the box scores noted below:

6 Video of the play is available at https://www.youtube.com/watch?v=GOjbTiU9kjk, retrieved January 12, 2021.