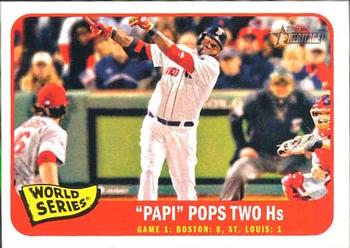 The 2012 Red Sox finished last in the AL East, with only 69 wins (69-93). The Cardinals were a game away from returning to the World Series that year; they had taken the NLCS to seven games before losing to the eventual world champion San Francisco Giants.

Mike Matheny was in his second year as St. Louis manager; for Boston’s John Farrell, it was his rookie year as a manager. Interestingly, Matheny had been the Cardinals’ starting catcher in 2004.2

Most of the position players on the Red Sox had grown beards during the 2013 season.

The Series opened in Boston and the Red Sox jumped out to a 3-0 lead in the first inning. Left fielder Matt Holliday, who’d been with the Rockies against the Red Sox in the 2007 World Series, singled in the top of the first, but he was the only baserunner for the Cardinals.

In the bottom of the first, Red Sox center fielder Jacoby Ellsbury worked a seven-pitch base on balls. After right fielder Shane Victorino lined out to left, Dustin Pedroia slapped a single into shallow center, Ellsbury holding at second. David Ortiz grounded to second baseman Matt Carpenter, who threw to second, attempting to force Pedroia. But shortstop Pete Kozma failed to handle Carpenter’s toss. The second-base umpire initially ruled that Kozma had lost the ball on the transfer after catching it for an out, but all six umpires conferred and overturned the call.4 The error loaded the bases.

First baseman Mike Napoli then drilled a double that two-hopped the wall in left-center field, clearing the bases; Ortiz motored all the way home from first base, helped by another little bumble as center fielder Shane Robinson had trouble picking up the ball. Wainwright ended his 31-pitch inning by retiring the next two batters.

Lester struck out two and got a groundout in the top of the second. The Red Sox added two more runs in their half of the inning. After singles by shortstop Stephen Drew5 and catcher David Ross6 and a fly out to left by Ellsbury, Victorino reached when Kozma — a rookie but prized for his defense — made his second error in two innings, loading the bases again.7

Pedroia singled to left field, the ball scooting under third baseman David Freese’s glove; everyone moved up one base and the Sox took a 4-0 lead. Ortiz, who had struggled with a .200 average in the ALDS and ALCS, hit a fly ball to deep right field, seemingly bound for the Cardinals’ bullpen. But Carlos Beltran denied his bid for a grand slam by reaching over the fence to make the catch. Ortiz was left with a productive out when Ross scored on the sacrifice fly, pushing Boston’s advantage to 5-0. Napoli ended the inning with a groundout to Wainwright.

Neither team got a man on base in the third inning. Beltran, playing in his first World Series game after a 16-year career and 45 postseason games, left the game with a right rib contusion, caused by banging into the bullpen wall while robbing Ortiz of a grand slam. He returned to the lineup for all of the remaining games of the World Series.

St. Louis loaded the bases with just one out in the top of the fourth, but Freese hit into a 1-2-3 double play — to Lester, who threw home to force the runner coming from third, and then Ross threw to Napoli in time to get Freese. Lester was comfortable with Ross catching, rather than Jarrod Saltalamacchia, Boston’s regular backstop. “They’ve developed a really good rapport,” said manager John Farrell. “For whatever reason now, Rossy and I are clicking,” said Lester.8

Alternating outs and singles (by center fielder Robinson and second baseman Carpenter), the Cards got two on base in the fifth but neither scored. In the bottom of the inning, Ortiz singled, but both Napoli and left fielder Jonny Gomes grounded into force plays at second base.

Left-handed specialist Randy Choate pitched to one batter, Ellsbury, and got him to ground out, second to first. Seth Maness cycled in, retiring Victorino on a line out to first baseman Matt Adams. Maness would have closed out the inning, but Pedroia reached first on third baseman Freese’s throwing error. Matheny turned to Kevin Siegrist to pitch to Ortiz, a few weeks before Big Papi — playing in his third World Series — was about to turn 38. Siegrist’s first pitch came in at 97 mph. Papi pounced, driving it deep to right. This time, no outfielder would rob him: The ball soared over the Red Sox bullpen for a two-run homer. Ortiz said, “A guy with that kind of fastball, you’re not going out there and look for the changeup or the slider.”10 It was 7-0 and the game seemed pretty well salted away.

Lester got the first two outs in the eighth, and reliever Junichi Tazawa got the third, striking out Jon Jay.

Matheny summoned Carlos Martinez, St. Louis’s sixth pitcher of the game, for the bottom of the eighth. Daniel Nava pinch-hit for Jonny Gomes and doubled into the left-field corner. A wild pitch to the next batter, Bogaerts, allowed Nava to take third base. Bogaerts lined out to left field, Nava tagging up and scoring on the play. It was 8-0, and — after Martinez retired the next two batters — all the Cardinals had left was three outs.

Ryan Dempster came in from the Red Sox bullpen to close out the game. The first batter he faced was Matt Holliday, who hit a home run into the light tower atop the Green Monster in left-center. The Cardinals were on the board, but still faced a seven-run deficit.

Allen Craig, back after a month and a half lost to a left foot injury, flied out to right field.11 Catcher Yadier Molina popped up to the second baseman. Freese singled to right field, but Matt Adams struck out swinging. The Red Sox had won the first game of the 2013 World Series.

The St. Louis Post-Dispatch’s Bernie Miklasz was in a sour mood. The team had committed a “Cardinal sin,” he wrote, far from exorcising the embarrassment of being swept by the Red Sox in 2004. He dubbed it a “particularly hideous performance, a humiliating stumble … a clown show” and said, “It’s time to dump the 2004 oldies act.”12 Venturing closer to actual analysis, he added, “Wainwright couldn’t command his cutter or curve and couldn’t prevent himself from playing right into Boston’s usual calm approach. The trap was set and Waino couldn’t avoid it. The Red Sox wisely waited him out and pounced on Wainwright’s mistakes up in the zone.”

“Everything I threw tonight was pretty garbage,” Wainwright said.13 Perhaps thinking of the ball that dropped right in front of him as much as his pitching, he added, “I didn’t take charge. On one hand I can count the number of times that I’ve felt [so] out of synch. … I was terrible.” Matheny chimed in, “That is not the kind of team that we’ve been all season. I’m sure they’re embarrassed to a point.”14

The Red Sox had been given a few breaks and they took them — and then some. John Farrell said, “I think we’ve seen that when you give a team extra outs, as good as the teams you’re going to play this late in the season, it can come back to haunt you.”15

3 Lester, a left-hander, had more wins than any other Boston pitcher. Wainwright threw right-handed; his 19 wins led the National League. The Cardinals had two 15-game winners in Lance Lynn and Shelby Miller. The Red Sox had 12-1 Clay Buchholz and 11-6 Felix Doubront.

4 The plans were already in place for instant replay, a review process to be implemented in 2014 if an umpire’s call was challenged. For a detailed story about the overturned call, see Kevin Paul Dupont, “It Was the Right Call,” Boston Globe, October 24, 2013: D3.

5 Drew’s single came on a high popup pretty much right back to Wainwright, maybe four feet from the edge of the mound. He looked up, gestured that he had it, saw the ball come down, but then deferred to Yadier Molina, coming in from home plate. It was as routine a catch as one could hope to make, but it dropped in between them as they looked at each other, and Drew was safe.

6 Ross’s single was lopped just over the glove of a turned-around and leaping Carpenter at second base.

7 A Boston Globe sportswriter said, “Kozma is the last player you would have expected to falter in the field. His glove is his raison d’etre for being in the lineup.” Christopher L. Gaspar, “Visitors Lost the Handle Early,” Boston Globe, October 24, 2013: D1, D7.

11 Craig had 97 RBIs for the Cardinals at the time of the September 4 injury.