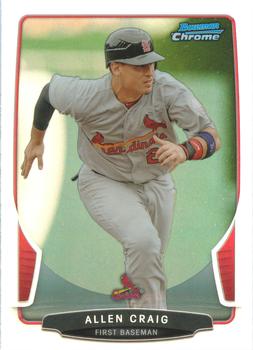 Twice, the Cardinals took the lead in Game Three. Twice, the Red Sox rallied to tie it up. Finally, in the bottom of the ninth inning, St. Louis scored one more run and won the game.

A St. Louis Post-Dispatch sportswriter summed up: “After an evening that spun out of control, the Cardinals took control of the 109th Fall Classic — on a classic fall by Allen Craig.” The game ended, he wrote, on “a limp-off win.”1

The starting pitchers were two right-handers: Joe Kelly for the Cardinals and Jake Peavy for the Red Sox. Both brought 0-1 postseason records into Game Three.

It was the 25-year-old Kelly’s second year in the majors. He had been 10-5 during the regular season, with a 2.69 earned-run average. He started 2013 in St. Louis’s bullpen (22 games, 0-3), but moved into the starting rotation on July 6 (14 starts and one game he entered to start the second inning, 10-2). He had a dominant first inning, with a strikeout and two groundouts — both of which he was involved in, first with an assist after barehanding a bouncer and then covering first for the putout on a grounder to first baseman Matt Adams.

Since it was a game in a National League park, there was no DH. David Ortiz played first base; Mike Napoli was odd man out, on the bench. Allen Craig was the DH for St. Louis when in Boston, but there was no room for him here.

Through 13 postseason games, the Cardinals were batting .208 as a team, but their bats came to life in the first inning against Peavy. Four of their first five batters hit singles, producing two runs.

Adams — the third prong of St. Louis’s “Matt” attack — hit one into right, too, between first and second. Holliday stopped at second. Yadier Molina swung at the first pitch and singled, between two other infielders — the shortstop and third baseman. Holliday scored. Peavy retired the next two batters, but St. Louis led, 2-0. It was the first time in the 2013 postseason that the Cardinals scored in the first inning.

Kelly, as in the first inning, didn’t let the Red Sox get a ball out of the infield. He induced three groundouts in the second.

After Peavy retired all three Cardinals in the bottom of the second, Kelly did it again — striking out two and getting Peavy to ground out.

The second time through the order for Boston, Jacoby Ellsbury singled off the second baseman’s glove in the top of the fourth, and Ortiz walked later in the inning, but the Red Sox did not move the scoreboard. The Cardinals loaded the bases with nobody out in their half of the fourth, but Peavy struck out Pete Kozma and got Kelly and Carpenter on infield popups.

Rookie Xander Bogaerts led off the Red Sox fifth with a triple to the wall in right-center. A walk and a strikeout followed. Mike Carp pinch-hit for Peavy. He grounded into a force play at second, while Bogaerts, who had turned 21 three weeks earlier, scampered home. It was 2-1, Cardinals.

Felix Doubront came in to pitch for Boston in the fifth. Adams doubled, but no real damage was done.

In the top of the sixth, Shane Victorino — hitless through 10 World Series at-bats at this point — drew a base on balls. After Dustin Pedroia lined out, Cardinals manager Mike Matheny waved in left-handed specialist Randy Choate to pitch to Ortiz. Big Papi singled to right field and Victorino advanced to third. Seth Maness relieved Choate. Daniel Nava smacked a single into left field to the score, 2-2. The Red Sox sought their first lead of the game, but Bogaerts hit into a double play, ending the inning.

Both Matheny and Red Sox manager John Farrell substituted heavily in the sixth and seventh, and the next runs came in the bottom of the seventh after Craig Breslow had taken the mound for Boston. Carpenter singled and then Breslow hit Beltran with the very next pitch. Junichi Tazawa relieved Breslow. Holliday shot a double down the left-field line, under a diving Will Middlebrooks, who had entered the game at third. Two runs scored and St. Louis had a 4-2 lead. A couple of strikeouts, a walk, and a fly ball to center field, and the inning was over.

In the top of the eighth, the Red Sox tied it right back up.

Carlos Martinez had come in to pitch to Boston. Ellsbury singled, right up the middle. Victorino was hit by a pitch. Pedroia grounded out, short to first, and both baserunners advanced. The Cardinals weren’t going to take any chances with David Ortiz; they walked him intentionally.

Matheny brought in Trevor Rosenthal with the bases loaded and one out. The Cardinals closer hadn’t given up a run at home since August 15. Nava hit a ball hard to second base, fielded brilliantly by Kolten Wong, but Nava busted it down the first base line faster than the Cardinals infielders could turn the double play. Ellsbury scored, cutting the St. Louis lead to 4-3.

Bogaerts hit a ball that struck in front of the mound, bounced high over Rosenthal, then took another high bounce, so high that it glanced off the top of Kozma’s glove. It was a single and the game was tied. Saltalamacchia grounded out to end the inning.

Brandon Workman pitched the bottom of the eighth for the Red Sox. Wong singled, and stole second, but did not score.

The game moved into the ninth inning. Rosenthal disposed of the Red Sox fairly easily, with two strikeouts and a groundout. Curiously, the second strikeout was of Workman, in his first major-league at-bat. Why was a relief pitcher batting in the ninth inning of a tie game? The Red Sox may have screwed up. “We’re not saying we did everything the right way and there are things we’d like to have back,” acknowledged Boston bench coach Torey Lovullo after the game. “There was a lot going on in the dugout, a lot of moving parts.”2 They wanted to have Workman available for multiple innings.

Workman struck out Adams, the first batter up in the ninth. Molina singled to right field. Rosenthal was due up, but Allen Craig pinch-hit for him. Once Craig was announced, Farrell summoned Koji Uehara to pitch. Tim McCarver, on the Fox telecast, said that Uehara had been brilliant, to an unprecedented degree: “He has allowed fewer baserunners per inning than any pitcher, in any season, any time.”

After McCarver’s buildup, Craig lined Uehara’s first pitch into left field for a double. Molina held at third base, but the Cardinals had runners on second and third with just one out. The infield was playing in, ready to throw home and cut down any attempt to score.

Center fielder Jon Jay stepped into the batter’s box. Rather than walk him to set up a double play with the weaker-hitting Kozma on deck, the Red Sox pitched to Jay. Strike one. He swung at the next pitch and for a moment, it appeared the Red Sox strategy had worked. Jay grounded to second baseman Pedroia. With Molina running home, Pedroia fielded the ball and fired it to catcher Jarrod Saltalamacchia.

Saltalamacchia tagged Molina for the second out of the inning — but then he threw to third, aiming to cut down an advancing Craig. He might have gotten Craig if Middlebrooks had held the ball, but the throw went into left as both runner and fielder got a little tangled up.

Craig stumbled over Middlebrooks and fell down, then got up and ran home. Nava’s throw from left came home in time for the Red Sox catcher to tag Craig, hampered as he was by a bad ankle. But third-base umpire Jim Joyce ruled that Middlebrooks had obstructed Craig and awarded St. Louis the winning run.3 The tag didn’t matter. The game was over. It wasn’t a walkoff; as Bernie Miklasz had written, it was more of a “limp-off.”

The result, of course, was that the Cardinals won the game, 5-4, thrilling the home crowd and gaining a two-games-to-one edge in the World Series.

“Tough way to have a game end, particularly of this significance,” said John Farrell. “Will is trying to dive inside to stop the throw. I don’t know how he gets out of the way when he’s lying on the ground. And when Craig trips over him, I guess by the letter of the rule, you could say it’s obstruction. Like I said, it’s a tough pill to swallow.”4

Rosenthal, who was credited with the win, confessed: “I’m not sure what happened. But I know we won.”5

5 It was also “the trip of a lifetime,” wrote Bernie Miklasz. “This One Is Hard to Believe.”