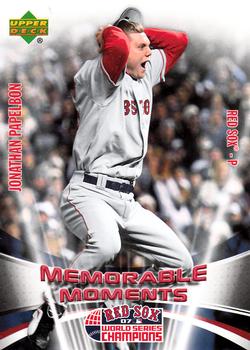 By the seventh-inning stretch, a feeling of doom pervaded Denver. The Rockies’ miraculous “Rocktober” run — winning 21 of their last 22 games, including sweeps of the Division Series and LCS — had been brought to an abrupt halt by the Red Sox winning the first three games of the World Series. And the Sox held a 3-0 lead in Game Four, needing just nine outs to secure the seventh World Championship in franchise history.

That lead had built slowly. Aaron Cook was Clint Hurdle’s starting pitcher. The right-hander had a regular-season record of 8-7 (4.12); a strained left oblique had sidelined him since August 10, 2½ months earlier.1

Jon Lester was Boston’s starter. The 23-year-old left-hander was a feel-good story, diagnosed with cancer just 14 months earlier. “A year ago, I wasn’t even playing baseball. My season got cut short,” he said after the game.2 He’d returned to play on July 23 and built a 4-0 record (4.57). He’d pitched 3 2/3 innings in two ALCS games, but this was his first postseason start. His last start was a month earlier, September 26.

Down three games to none, the Rockies hoped to win four in a row — just as the Red Sox had done in the 2004 ALCS against the Yankees.

Jacoby Ellsbury — coming off four hits in Game Three — hammered Cook’s first pitch of the game into the left-field corner for a double. Dustin Pedroia grounded to third baseman Garrett Atkins, and Ellsbury easily scooted to third. He scored when David Ortiz singled through a drawn-in infield, the ball shooting through the narrow gap between the first and second basemen. The Red Sox were on the board, 1-0.

Lester kept the ball in the infield in the bottom of the first, getting a popup he fielded himself, a strikeout, and a groundout.

Cook bore down and retired the Red Sox in order during the second, third, and fourth innings. Eight batters in a row failed to get the ball out of the infield before Manny Ramirez lined to left to end the fourth.

Meanwhile, Lester defused Colorado’s potential rallies. Todd Helton led off the second with a double. One out later, he moved to third on a deep fly ball. Lester walked Brad Hawpe but got Yorvit Torrealba to ground out. In the third inning, Lester gave up a one-out double to Kaz Matsui but struck out both Troy Tulowitzki and Matt Holliday to preserve the 1-0 lead.

The Sox added a run in the top of the fifth. Mike Lowell jumped on Cook’s first pitch and hit it to left-center for a double. After J.D. Drew to grounded back to the mound for the first out, Jason Varitek — batting left-handed — singled between first and second. Right fielder Hawpe threw home, but Lowell executed a perfect headfirst slide, reaching in with his right hand to swipe the plate. It was Tek’s fifth run batted in of the World Series. Julio Lugo singled, but then Lester struck out and Cook whiffed Ellsbury, too.

The Rockies got their third base hit, in the bottom of the fifth — from Cook himself. He bunted past Lester to second base and was on first. There he remained, though, as Matsui popped up to Lugo at short and Tulowitzki grounded out, Lowell to Ortiz. The ball hadn’t left the infield.

Cook returned the favor in the sixth, getting groundouts from Pedroia, Ortiz, and Ramirez. This was a close game, a well-pitched game on both sides, by two pitchers who had not had much recent work.

The Red Sox team ERA of 3.87 had led the American League, not something for which Red Sox teams were known. Indeed, Joe Buck noted on the telecast that the Sox had never led the league in team ERA between 1915 and 1998.

Lester got two outs in the bottom of the sixth, then walked Garrett Atkins. Francona called on righty Manny Delcarmen to pitch to the right-handed Ryan Spilborghs. Delcarmen struck out Spilborghs to preserve the shutout.

Mike Lowell gave Boston another insurance run in the seventh. Leading off the inning, he took Cook’s second pitch several rows deep into the left-field seats. Jeremy Affeldt relieved Cook. He got a strikeout, gave up a single to Varitek, and secured a double play.

The Red Sox led 3-0 as the Coors Field crowd stood for what was potentially the final seventh-inning stretch of the season. Hawpe was up first for Colorado. He fought Delcarmen to a 3-2 count, then homered deep into the right-field seats. The score was now 3-1. After a flyout and a single by pinch-hitter Cory Sullivan (batting for Affeldt), Francona replaced Delcarmen with Mike Timlin. Timlin struck out Matsui and Tulowitzki to send the game to the eighth inning.

The Rockies’ situation was stark: they needed to score two or more runs before they made six outs. Their 45 regular-season come-from-behind wins and two more in the postseason gave cause for hope. But Brian Fuentes first had to hold back the Red Sox, starting with pinch-hitter Bobby Kielty. Kielty had opened the season with Oakland but was released at the end of July. On August 6, the Red Sox signed him as a free agent. He hit .231 in 52 at-bats. He’d drive in in a couple of runs in Game One of the ALCS, but not seen much action. He swung at Fuentes’ first pitch and slammed it even deeper to left field than Lowell’s drive. It was 4-1, Red Sox.

The home run was Kielty’s last swing in the major leagues and it made all the difference in the game.3 Hideki Okajima pitched against the Rockies in the bottom of the eighth. He got Holliday to ground out, but Helton singled to left, and Garrett Atkins came to bat. He’d gone nine postseason games without an RBI, but he brought the Rockies back to within a run with a two-run homer into the left-field stands.4 Jonathan Papelbon came in and got the last two outs in the eighth.

Manny Corpas retired the three Red Sox batters he faced in the top of the ninth to set up the Rockies’ final chance. It was a one-run game, but Papelbon maintained his dominance and, despite a one-out drive by Jamey Carroll that pinned Ellsbury against the fence in left field, shut down the side in the bottom of the ninth.

Mike Lowell was named Series MVP. The 33-year-old third baseman had excelled through the postseason, hitting .353 with 15 RBIs in the 14 games.

Each of the four Red Sox starters in the Series earned a win. Jonathan Papelbon earned saves in Games Two, Three, and Four. And Jon Lester, who had both beaten lymphoma and won the Series-clinching game, received high praise from Game Two winner and postseason legend Curt Schilling: “[He] pitched the clutchest game I’ve ever seen pitched anywhere, at any level, in my life, considering what he’s gone through off the field.”5

A Denver writer summed it up pretty well: “Sometimes dreams, no matter how inspiring, are not enough. The Rockies’ magical season died on Sunday night, forever frozen within reach of a goal that seemed laughable when the players arrived in Tucson eight months ago.”

He added, “Colorado just never caught its breath, never gained traction. Everything was an uphill trudge, the Rockies trailing in 33 of the 36 innings.”

He quoted Todd Helton, who played in what turned out to be the only World Series of his outstanding 17-year career: “To get this close and not win, it’s hard…When we get away from it, we will realize that we did something special.”6

The Rockies’ run could hardly have been more special. That they got to the World Series at all was remarkable, as was the way they did it.

Maybe having eight days off between sweeping the NLCS and starting the World Series hurt them, but Tulowitzki disagreed: “No, we just got behind and never rebounded. I think we all thought we belonged here. They have more experience than us, and maybe that helped, but they just played better than us.”7

Maybe they had been pressing too hard: In the four games, they struck out 36 times but had only 20 base hits. Yet two of the games were one-run games, and even Game Three was winnable up to a point. The Rockies battled a Boston team with a payroll nearly three times larger.8 Red Sox manager Terry Francona said, “We beat a very good team. I hope nobody forgets that. They gave us a battle to the end.”9

Hurdle spoke to the Rockies fan base, through the media: “I told the guys that they brought me more joy this year that I had had in 33 years of professional baseball.” This was a team that had finished in last place just the year before. Not one of them had any World Series experience, save Willy Taveras, who had pinch-hit in Game Three and not been used at all in Game Four.

The Rockies definitely ran into a juggernaut in a Red Sox team that had won pretty consistently all season long. Indeed, a Globe editorial acknowledged, “This team provided enjoyment, and very few reasons for agita, every time they took the field. Winning is better than what-might-have-been’s and made-up curses….Let’s have a parade.”10

In addition to the sources cited in the Notes, the author also consulted Baseball-Reference.com, Retrosheet.org, and a YouTube video of the game. Thanks to Carmen Reale for supplying articles from the Denver Post.

1 Further details on Cook may be found at Jim McCabe and Amalie Benjamin, “Cook’s effort for naught,” Boston Globe, October 29, 2007: 47.

3 Gordon Edes identified Kielty as the grandson of a Fitchburg, Massachusetts letter carrier. After the homer, Kielty said, “I was pretty blank, I was so excited, felt like I was running on clouds.” He added, “It’s a weird game, you don’t know where you’re going to end up. I was having the worst year of my life…and now it’s turned into the best year of my life.” Gordon Edes, “Sox are kings of diamond,” Boston Globe, October 29, 2007: 42. For more on Kielty, see John Powers, “Chance at immortality swings his way,” Boston Globe, October 29, 2007: 46.

4 In fact, five of the Rockies had 90 or more RBIs during the regular season (Atkins, Hawpe, Helton, Holliday, and Tulowitzki), but during the World Series they combined for only nine RBIs, batting a collective .240.

10 Editorial, “The Sox make a habit of success.” Having waited 86 years between World Series wins in 1918 and 2004, Bob Ryan wrote that one need no longer needed to scour nursing homes to find someone who’d been around the last time the Sox had won it all. Red Sox fans had perhaps a degree of license to gloat. Bob Ryan, “Exclamation point added,” Boston Globe, October 29, 2007: 44.