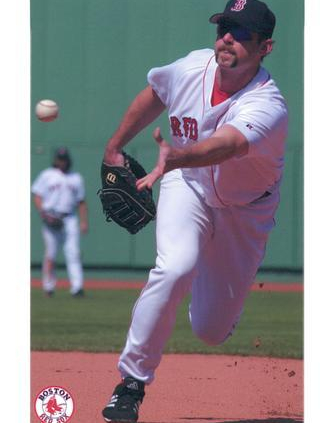 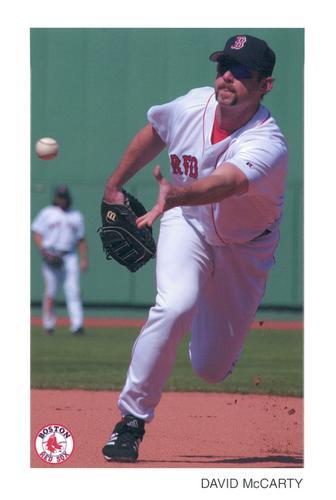 Dave McCarty entered the 2004 season at age 34, having played in the majors since 1993. Baseball America’s collegiate player of the year at Stanford University in 1991, then selected by the Minnesota Twins third overall in the amateur draft that June, McCarty was with his seventh big-league team, the Boston Red Sox, and he had 616 games under his belt as 2004 wound down and the final regular-season game approached. Some 201 of those had been with the Kansas City Royals in 2000 and 2001.

For the most part, McCarty was a utilityman in the big leagues, playing about two-thirds of his games at first base and a third in the outfield. He’d appeared in just 25 games in 2002 and 24 in 2003.1

Hoping to extend his career, McCarty wanted to try his hand at pitching.

He hadn’t pitched since high school, never once in the minors, but though he batted right-handed, he threw left-handed and had thrown a full bullpen for pitching coach Dave Wallace in September 2003.

“It’s an idea I’ve kicked around for the last several years,” McCarty told the Boston Globe at the start of spring training in 2004.2 He’d been encouraged by the success of the Milwaukee Brewers’ Brooks Kieschnick in 2003, who’d entered the majors the same year as McCarty and had likewise been an outfielder and first baseman, but worked 42 games as a relief pitcher for Milwaukee that year (1-1, 5.26 ERA, while batting an even .300). “Once [Kieschnick] paved the way, I figured I might as well give it a shot. … My primary job is as a hitter, but if I can go out there and pitch some time, too, especially throwing left-handed, that’s a big plus.”3

Red Sox manager Terry Francona said he was intrigued, that they would see how it worked out, but that McCarty would get a shot. Francona just wanted to be sure McCarty didn’t hurt himself.

In mid-March there was a report that the Red Sox had “backed off McCarty’s pitching experiment” but he did continue to throw on the side.4

McCarty didn’t have to wait long to get summoned to the mound. In just the fifth game of the season—the home opener, on April 9 at Fenway Park—Francona brought McCarty in during the ninth inning, with the Red Sox trailing the Toronto Blue Jays by three runs, a runner on first, and one out. After McCarty retired Orlando Hudson on a comebacker, a walk, a wild pitch, and a double by Kevin Cash saw one inherited run score and McCarty charged with one run of his own before getting the final out.5

It was a while before McCarty pitched again. Already at DH in the Red Sox’ May 27 game against the Oakland A’s, he warmed up in bullpen during the eighth and ninth innings with the Red Sox losing, 15-2, but Francona did not put him in.

McCarty’s second shot at pitching during a game came on June 12, when the Red Sox found themselves down 14-5 to the Los Angeles Dodgers at Fenway Park. Manny Ramírez had been pulled out of left field, and McCarty replaced him there, then was brought in to pitch the ninth. On a groundout, strikeout, groundout, it was one-two-three, side retired. McCarty certainly had a better day than any of the four Red Sox pitchers who had preceded him.6

In the meantime, McCarty contributed as a batter and fielder. On May 30 he entered a tight Red Sox-Seattle Mariners game at first base in the eighth inning, moved to right field in the ninth, then hit a two-run walk-off home run in the 12th for a 9-7 win over the Mariners. In the second game of a July 22 doubleheader against the Baltimore Orioles, McCarty played left field, drove in two runs, and threw out a runner at the plate in a 4-0 win.

His pitching dreams on hold, McCarty warmed up in the bullpen at least one other time, during a blowout loss to the New York Yankees on September 18.

Finally, he made his third appearance as a reliever in the last game of the season, October 3.

This was a close game, but not one that affected the standings. Boston was solidly in second place, two games behind the Yankees. Both were headed to the American League Division Series, with their opponents still undetermined.

The Red Sox prepared for the last game on its schedule, on a Sunday afternoon at Oriole Park at Camden Yards, not sure whether they would be flying to Minneapolis or to Anaheim afterward to begin the ALDS. In fact, all eight playoff spots in both leagues were determined, but as late as 5:00 P.M. Eastern time, Division Series pairings remained an open question.

As the Baltimore Sun noted, “[S]even of major league baseball’s eight playoff teams spent the final day of the regular season thinking, ‘OK, now what?’”7 The Delta pilot on the airplane the Red Sox had chartered was ready to fly west, “prepared to monitor scores from the cockpit,” but didn’t know to which city he would be flying.8

Rick Bauer started for Baltimore. Derek Lowe started for Boston. Lowe was just getting a tune-up for the playoffs. He worked two innings, giving up one run in the second.

The Orioles added a second run off Terry Adams in the third. The Red Sox tied it with two runs in the top of the fourth, on a one-out RBI single by Trot Nixon and a double by Johnny Damon. Baltimore’s Bauer was replaced after four innings by Bruce Chen, who allowed just one hit, a single by Nixon in the top of the sixth, in three innings of relief.

The game, in the words of the Baltimore Sun, “played out like an exhibition at Camden Yards. Francona subbed for most of his regulars early in the game.”9

Francona called on McCarty to work the bottom of the sixth. McCarty struck out DH Rafael Palmeiro looking, got catcher Javy López to fly out to left, and retired left fielder B.J. Surhoff on a fly ball to Damon in deep center field.

Chen retired the Red Sox in order in the top of the seventh.

McCarty strode out to pitch another inning. First baseman Jay Gibbons hit another deep fly ball, but Nixon made the catch in right. Larry Bigbie, the center fielder, struck out looking. Second baseman Brian Roberts swung at the first pitch and doubled to center field, but was stranded there when McCarty struck out right fielder David Newhan, also on a called third strike.

He had allowed just the one hit while striking out three. Byun-Hyung Kim pitched the bottom of the eighth. There was no further scoring in the game, and Baltimore won, 3-2.

McCarty ended the season with the three appearances, having faced 14 batters in 3⅔ innings, with a 2.45 earned-run average. He’d yielded two hits and walked one, striking out four.

The Red Sox had to wait only 65 minutes after the final pitch to learn whether their opponents in the ALDS would be the Minnesota Twins or the Anaheim Angels. The game against Baltimore ended at 3:58 P.M. Eastern time. The Cleveland Indians beat the Twins, 5-2, in Minneapolis, at 4:03 P.M. Central time. The matchup was set: The Red Sox were flying to Anaheim to play the Angels. The advance scouting reports on the Twins could get chucked; the ones on the Angels were the ones to study.

McCarty did not play in the 2004 postseason, though he remained with the team.10 The Red Sox went with Kevin Youkilis because he was seen as a better backup for Bill Mueller at first base. During the regular season, McCarty had appeared in 89 games, batting .258 but with a .327 on-base percentage. He homered four times, drove in 17 runs, and scored 24. In 335 fielding chances—mostly at first base—he committed only three errors.11

McCarty appeared in 13 early-season games in 2005, as a late-inning defensive replacement at first base, but had only four at-bats. He hit .500 (2-for-4) but never took the mound. His final game was on May 1. He was “granted free agency” the following day, and his playing career was over, but not before he carved out a distinctive spot in Red Sox history with his two-way play in 2004.

This article was fact-checked by Thomas J. Brown and copy-edited by Len Levin.

In addition to the sources cited in the Notes, the author consulted Baseball-Reference.com and Retrosheet.org. Some of the material in this article draws on Bill Nowlin, Red Sox Threads (Burlington, Massachusetts: Rounder Books, 2013). Thanks to Mal Allen.

1 McCarty had come to Boston in early August 2003, selected off waivers from Oakland. He’d appeared in 16 games, batting .407 in 27 at-bats. He had only one plate appearance in that year’s postseason, a strikeout against the Yankees in Game Two of the 2003 ALCS.

3 Hohler. McCarty said that as a pitcher he had more finesse than power. “I’m not going to go out there and just get people out by having incredible, nasty stuff. But I’m the kind of guy I don’t like to face because I’m not going to give the hitter anything to hit.”

4 Nick Cafardo, “Exercising Caution on Nixon,” Boston Globe, March 18, 2004: C2. McCarty hit two home runs on the 18th. As of the 27th, he had been hitting .471 during spring training in his prior six games—and had worked out in the bullpen the day before. On the 29th, he threw an inning in an intrasquad game. The injury to Trot Nixon had pretty much guaranteed McCarty a roster slot to start the season. That he hit seven home runs in spring training had cemented the deal. And he had shown enough to be considered a possibility as an “emergency lefthanded reliever.” Bob Hohler, “Ramirez Snaps Out of It with Pop,” Boston Globe, April 3, 2004: D2. McCarty led the team in batting during spring training, hitting .410 with 18 RBIs. His seven homers tied him with David Ortiz.

5 Nick Cafardo, “McCarty Isn’t King of the Hill,” Boston Globe, April 10, 2004: F8. McCarty talked about how as a youngster he had been a big Joe Sambito fan and pretended to be him. Come 2004, Sambito was actually McCarty’s agent representing him in negotiations.

6 Starter Tim Wakefield was charged with eight runs, Anastacio Martinez with four, Mark Malaska with two, and while Scott Williamson had not given up a run and struck out three batters in one inning of work, he did give up a single—which McCarty did not.

10 Bob Hohler, “Mendoza In, Youkilis Out,” Boston Globe, October 12, 2004: C9. Ellis Burks and Sandy Martinez also remained with the team, in case they were needed, though not on the roster. For the World Series roster, Youkilis was chosen over McCarty because, with Kevin Millar, Doug Mientkiewicz, and David Ortiz, it was felt they had sufficient depth at first base. Ortiz was to play first base against the Cardinals in St. Louis because National League rules did not permit a designated hitter.

11 McCarty had seen action of another sort in 2004, while on the 15-day disabled list due to a ganglion cyst on his right wrist. Unknown to the public, he suited up as Wally the Green Monster (the Red Sox mascot) and went out on the field during the last couple of weeks in August.