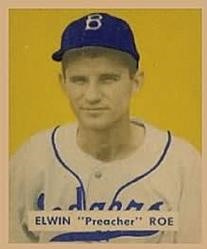 “One day when I was three years old my Uncle Bathis (my daddy’s only brother) asked me what my name was. I said to him, ‘Preacher.’ Don’t know why I said that but it’s stuck with me ever since.”1 — Preacher Roe

There is an excitement that builds in anticipation of each World Series game. Just ask any baseball fan who has ever been there in the ballpark, watched one on television, or listened to the radio play-by-play.

As the crowd (70,053) began to file into Yankee Stadium for Game Two of the 1949 World Series, fans had to still be thinking about what they saw and heard in Game One.2 Perhaps it was the two-hit, complete-game performance of the Yankees’ Allie Reynolds while their ace relief pitcher Joe Page whiled away the day in the bullpen with nothing to do. Maybe it was the futility of the Dodgers’ bats, 0-for-14 from their four leading hitters—Duke Snider, Jackie Robinson, Gene Hermanski, and Carl Furillo—in the heart of the batting order.3 Don Newcombe’s pitching gem for Brooklyn, 11 strikeouts and no walks, had to stand out. After all, he made only one bad pitch out of 114, one that Tommy Henrich stroked into the right-field stands for a game-ending home run and a 1-0 Yankees win. Game Two was a new day. Just imagine the opportunity to see the likes of Pee Wee Reese and Joe DiMaggio, Roy Campanella and Johnny Mize, Duke Snider and Hank Bauer, on baseball’s biggest stage!

If Game One was a classic pitchers’ duel in every sense of the words, Game Two was a battle of two good pitchers who faced each scoring threat head-on: lefty Preacher Roe (15-6, 2.79 ERA) for the Dodgers and righty Vic Raschi (21-10, 3.34) for the Yankees.4

Quietly enough in the first inning, Raschi retired the Dodgers in order and Roe yielded a single of little consequence to Phil Rizzuto.

Jackie Robinson came to bat to lead off the top of the second, providing us with the best example of what Robinson’s presence meant to the Dodgers on the field. Perhaps you could sense that Robinson wanted to make something happen for the Dodgers at this moment.

Red Barber shared with his radio audience that Robinson had become accustomed to inside pitches, leaning back from the plate to make solid contact with his thicker-handled bat.5 On a 2-and-2 count, Raschi’s fastball was not quite far enough inside; Robinson lined it into the left-field corner for a double.

As was his style on the basepaths, Robinson feinted and danced off second. When second baseman Jerry Coleman slipped slightly after catching Hermanski’s fly down the line behind first base, Robinson scampered to third. Marv Rackley grounded a dribbler up the third-base line, but Robinson had to hold his position at third as Billy Johnson fired to first baseman Henrich for the second out.

With Gil Hodges batting, Robinson was still thoroughly distracting Raschi, who had to pitch from a full stretch. After all, Robinson had stolen home 13 times since 1947.6

Hodges lined a single to left to score Robinson with the Dodgers’ first run of the World Series and a 1-0 lead. Raschi said later, “Robinson had broken my concentration. I was pitching more to Robinson than I was to Hodges and as a result I threw one up into Gil’s power and he got the base hit that beat me.”7

That was Jackie Robinson on the basepaths. He had just scored the first Dodgers run against the Yankees since the second inning of Game Seven of the 1947 World Series, 17 scoreless innings ago.8 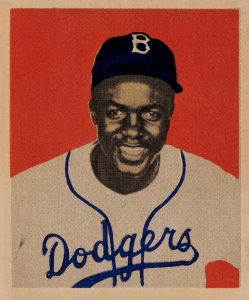 What could we expect for the rest of this game? Right after Robinson scored, Red Barber offered listeners a bold prediction in his inimitable style: “You just don’t get pitching you saw yesterday coming right back the second day on both sides. That’s not in the baseball book.”9 Would a single run be enough for victory two days in a row?

The Dodgers threatened again in the fourth inning when Hermanski’s lined shot to center took a weird bounce past DiMaggio for a triple. With one out, Coleman fired home on Rackley’s grounder to second and catcher Charlie Silvera applied the tag for the second out. Hermanski argued the call vociferously with plate umpire Beans Reardon, to no avail.

Each team continued to seek every advantage to get runners in scoring position. In the bottom of the fourth, Bauer opened with a single to center, but was thrown out at second, Snider to Reese, trying to stretch the hit into a double. After Roe struck out DiMaggio, Johnny Lindell smashed a liner off Roe’s glove hand and was thrown out at first when Roe quickly recovered. Roe’s resilience was on full display for the remainder of the game. Although the full extent of the injury to his third finger would await postgame x-rays, Roe shared his feelings about the trainer’s treatment in the dugout. “That made me sick to my stomach.”10

Raschi and the Yankees returned the favor in the fifth when Campanella singled to left but was thrown out at second, Lindell to Coleman. Even doubles didn’t seem to help. Coleman hit one off Roe in the fifth and Spider Jorgensen hit one off Raschi in the sixth to no avail.

As the game progressed to the later innings, the Yankees, frustrated with no runs on the scoreboard, challenged Roe in every inning. With two outs in the seventh, Billy Johnson singled to left and stole second, but Roe retired Coleman on a routine grounder. To open the eighth, Mize pinch-hit for Silvera and singled to right. Roe fanned pinch-hitter Bobby Brown but committed a fielding error on Rizzuto’s attempted sacrifice, putting runners on first and second with one out. No problem. Roe retired Henrich and Bauer and the scored remained 1-0.

Page finally got to the mound in this World Series, pitching the ninth in relief of Raschi. Snider opened with a single to left and Robinson sacrificed him to second where he remained when Page retired Carl Furillo and Luis Olmo.

Roe still had a 1-0 lead to protect in the ninth inning. As in the eighth, the first Yankees batter reached base when DiMaggio outran an infield grounder for his first hit of the World Series. But there he remained when Roe retired the side, Lindell, Johnson, and Coleman, for the win to even the World Series.

Roe threw 136 pitches, but the real story was his ability to retire batters in critical situations. Four batters ran the count to 3-and-2 and three others had a bigger advantage at 3-and-1. Preacher retired them all.11

What did Roe think about his performance, the first time his mother had seen him pitch in the major leagues?12 His glove hand still hurt. The injury certainly hadn’t affected his pitching and he reassured reporters that it wouldn’t bother his hitting either. Roe, a .114 hitter in the regular season, was quick to add, “The less said about my hitting, as a matter of fact, the better.”13 Roe later called his pitching performance the highlight of his career.14

On the other hand, Yankees fans were unaccustomed to seeing their team as victims of a shutout, the first against them at Yankee Stadium in 156 games. This was also the first time the Yankees had been shut out in a World Series since 1942, when the Cardinals’ Ernie White did so in Game Three, 2-0.

The Subway Series was ready to move from the Bronx to Brooklyn for Games Three, Four, and Five at Ebbets Field. The pitching for Game Three was set, Tommy Byrne (15-7, 3.72 ERA) for the Yankees and Ralph Branca (13-5, 4.39 ERA) for the Dodgers. Would pitching continue to dominate this World Series?

Each manager had his own view of the lack of hitting by both teams. After all, the two-game box score told the story with batting averages, .153 for the Dodgers and .178 for the Yankees. Dodgers manager Burt Shotton understood the obvious solution: “There’s nothing wrong with us that a few runs won’t cure.”15 Yankees manager Casey Stengel understood the odds and offered a prediction: “But everything evens up in the long run. Our hitters will start moving. Mark my words.”16 Stengel was right.

No story about Preacher Roe pitching for the Brooklyn Dodgers would be complete without mentioning his use of the spitball throughout his career. Dick Young interviewed the retired pitcher in St. Louis when Roe came to visit his ex-teammates before they played the Cardinals. Young’s award-winning story appeared in the July 4, 1955, issue of Sports Illustrated. Roe insisted he wasn’t confessing and his conscience didn’t bother him. “I guess it won’t hurt anybody to tell the truth now. I threw spitballs the whole time I was with the Dodgers. Seven years in all.”17

Sliders, sinkers, and forkballs. Roe discusses using them all in Game Two when interviewed by the United Press.18 New York Herald Tribune sportswriter Harold Rosenthal insisted that he had never seen Roe throw a forkball in the years he covered the Dodgers.19 The Dickson Baseball Dictionary educates us that a forkball was also called a “dry spitter” in the days when the spitter was a legal pitch.20 The details of Roe’s actual repertoire for Game Two are left to our imagination.

In 1951 Roe finished with a 22-3 record and was named National League pitcher of the year by The Sporting News.21 The Games Project essay by this author capturing the night Roe won his 20th game of the season against his former Pirates teammates provides a review and another perspective on the pitcher and his use of the spitball.22

The author accessed Baseball-Reference.com for box scores/play-by-play information (baseball-reference.com/boxes/NYA/NYA194910060.shtml), and other data, as well as Retrosheet.org (retrosheet.org/boxesetc/1949/B10060NYA1949.htm). The baseball cards (Preacher Roe #162, Jackie Robinson #50) are from the 1949 Bowman series and were obtained from the Trading Card Database.

4 Paul Dickson, The Dickson Baseball Dictionary, 3rd Edition (New York: W.W. Norton & Company, 2009), 643. Dickson defines pitchers’ duel as “a low-scoring game in which the quality of the pitching is quite clearly better than that of the hitting.”