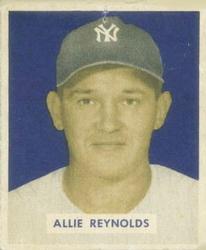 “A baseball season’s never ended. You play ’em all over during the winter, awake or asleep. The only difference this winter is that they’ll be pleasant dreams instead of the nightmares I used to have at Boston and Brooklyn.” – Casey Stengel1

Before the story of the 1949 World Series could unfold, the drama of two pennant races had to play out to the very end. For the first time in major-league history, the pennant races in both leagues remained unresolved until the very last day of the regular season.2

The first-place Boston Red Sox came to Yankee Stadium for the last two games of the regular season with a one-game lead over the New York Yankees. Win one game and the American League pennant was theirs. In fact, they had moved into first place nearly one week earlier by winning three consecutive games from the Yankees in a home-and-home series. It had been quite a turnaround from occupying fifth place on July 7, nearing the season’s midpoint.3

In the season’s next to last game, on October 1, the Red Sox jumped out to a 4-0 lead against Yankees starter Allie Reynolds, who didn’t survive the third inning. The Yankees tied the score with two runs in each of the fourth and fifth innings, and reliever Joe Page, 1949’s major-league leader in saves (27), limited the Red Sox to one hit in the final 6⅔ innings. Johnny Lindell’s tiebreaking solo home run off Joe Dobson in the eighth inning gave the win to the Yankees. The American League pennant would now be decided on the next day.

Both teams had 20-game winners pitching the finale: Vic Raschi (20-10) for the Yankees, Ellis Kinder (23-5) for the Red Sox. The Yankees led from the outset after Phil Rizzuto tripled in the first inning and scored on a groundout. Raschi was masterful, limiting the Red Sox to two hits through the first eight innings. The five-run lead he took into the ninth inning included an eighth-inning homer by Tommy Henrich. Raschi wobbled a bit in the ninth, but when Birdie Tebbetts popped out as the tying run, Raschi had a 5-3 win and the Yankees had the pennant.

The National League pennant race in September was clearly a two-team affair between the Brooklyn Dodgers and the St. Louis Cardinals. When the month began, the Dodgers found themselves in second place, 1½ games behind the league-leading Cardinals. As the last weekend of the season approached, the Dodgers moved into first, sweeping a Thursday afternoon doubleheader from the Boston Braves thanks to big bats and the stellar pitching of Preacher Roe and Don Newcombe.

The Cardinals did themselves no favors by losing to the lowly Pirates and Cubs in four of the last five games. The Dodgers needed to win their last game, against the Phillies at Shibe Park, to avoid a playoff with St. Louis and that they did with 13 hits – 12 singles and a double! A 5-0 Brooklyn lead in the third inning was eventually wiped out by the Phillies in the sixth, but the Dodgers scored two runs in the 10th on hits by Pee Wee Reese, Duke Snider, and Luis Olmo, and became National League champions.

It was now time for another Brooklyn Dodgers vs. New York Yankees World Series, the third such occasion since 1941. The backstories for this one were numerous. For example, take the play of Yankees right fielder Tommy Henrich, nicknamed “Old Reliable.”4 In late August Henrich crashed into the outfield wall at Comiskey Park, breaking two vertebrae in his back in the process. Headlines in the New York Times blared, “Outfielder Is Lost for Rest of Season.”5 Not quite. Henrich returned to the Yankees lineup for the last two weeks of the regular season.

As for the Dodgers, Branch Rickey was very clear early in the season as to what he thought of his team: “This is the best big league squad I’ve ever been associated with, either at St. Louis or in Brooklyn.”6 The Dodgers led the National League in virtually every offensive category – hits, batting average, home runs, runs scored, OPS, etc.7 New York Times columnist Arthur Daley thought that Dodgers pitching was also up to the task.8 But were they good enough to beat the Yankees?

Clearly, gamesmanship was at play as the two teams prepared to meet in Game One. Just the day before, the Dodgers paraded down Flatbush Avenue in Brooklyn as a half-million fans celebrated the National League champions and expressed their predictions about the outcome of the World Series.9 Casey Stengel, in his first season as Yankees manager, named Allie Reynolds (17-6, 4.00 ERA) as his Game One starter and was clearly irked that his Dodgers counterpart, Burt Shotton, had not officially done so as the morning papers hit the street. “What’s this, some more of that feathery stuff. Why can’t he name his starting pitcher? Must they muddle over a hurler through the night in Brooklyn?”10 The starting assignment for the Dodgers went to Don Newcombe (17-8, 3.17 ERA), National League Rookie of the Year.

Plain and simple, the Game One crowd (66,224) saw a pitching duel from beginning to end. Reynolds was certainly stingy with the hits. In the first inning, Spider Jorgensen dropped a one-out double into left-center between Johnny Lindell and Joe DiMaggio but was stranded when Reynolds struck out Snider and induced Jackie Robinson to fly out.

Reynolds was in trouble again in the second when he walked Gene Hermanski and Carl Furillo to open the inning. Gil Hodges twice bunted foul in an attempt to advance the runners. Instead he grounded into a double play and Roy Campanella’s fly ball ended the inning.11 Perhaps the frustrations of the first two innings were a sign to Dodgers fans of the game’s outcome to follow.

Jerry Coleman’s one-out error on an easy grounder and a walk to Campanella in the fifth could also have been Reynolds’ undoing, but he struck out Newcombe and retired Reese on a grounder. After Jorgensen’s first-inning double, Reynolds did not yield another hit until the eighth, when Reese singled to center and stole second. No worries. Reynolds struck out Jorgensen and Snider to end any threat.

As for Newcombe’s pitching, he was in control from the outset. Lindell’s one-out single in the second inning and Reynolds’ one-out double in the third were of no subsequent consequence. In fact Reynolds, who added a single to left in the sixth inning, was the leading Yankees hitter in Game One. Newcombe retired the side in order in the first, fourth, fifth, and seventh innings, including three strikeouts in the fifth. 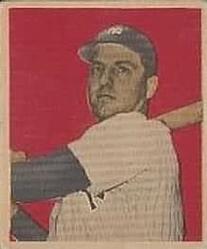 When the Yankees came to bat in the bottom of the ninth inning, Newcombe had an enviable pitching line – no runs on four hits, no walks, and 11 strikeouts on 111 pitches. The first batter was Henrich, who had a groundout and pop fly to Reese and a fly out to Snider in his first three at-bats against Newcombe. Two curveballs, one outside and one low, and a 2-and-0 count gave Henrich the advantage. He stroked Newcombe’s 114th pitch into the right-field seats for the game’s only run.

As Henrich rounded third and headed home to his waiting teammates, Red Barber caught the joy of the moment on his radio call. “Look at him grin, big as a slice of watermelon. Wow! … They call him Old Reliable and they are not joking.”12

It was the first World Series game ever concluded with a walk-off home run. It was as tough a loss for Newcombe as it was “one of [Reynolds’] most glittering exhibitions.”13

Reynolds had thrown only four complete games in 31 starts, the fewest among the Yankees’ top pitchers. Relief ace Joe Page had saved 10 of Reynolds’ wins this season. He waited in the bullpen all afternoon through Reynolds’ 123 pitches, but wasn’t needed. Reynolds was that good despite four walks and a full count on nine Dodgers batters.

The win had to bring back memories for Casey Stengel. This game was the ninth one in World Series history to be decided by a 1-0 score. On only one other occasion had the 1-0 outcome been decided by a home run. On October 12, 1923, center fielder Stengel hit a home run off Sad Sam Jones at Yankee Stadium as the New York Giants beat the Yankees in Game Three.14

Others might have remembered Opening Day of the 1949 season when the Yankees hosted the Washington Senators. Henrich hit a walk-off home run in the ninth inning off Sid Hudson for a 3-2 Yankees win to open the season. Today “Old Reliable” did the same thing, only the World Series stakes were bigger.

The author accessed Baseball-Reference.com for box scores/play-by-play information (baseball-reference.com/boxes/NYA/NYA194910050.shtml) and other data, as well as Retrosheet.org (retrosheet.org/boxesetc/1949/B10050NYA1949.htm). The baseball cards (Allie Reynolds #114, Tommy Henrich #69) are from the 1949 Bowman series and were obtained from the Trading Card Database.

3 When the fifth-place Red Sox lost a holiday doubleheader at Yankee Stadium on July 4, their record fell to 35-36, 12 games behind the first-place Yankees.

4 “Yankees broadcaster Mel Allen began calling Henrich “Old Reliable” – the name of a train that ran from Ohio to Alabama and was celebrated for always being on time – because of his propensity for hitting in the clutch.” (Rob Edelman, “Tommy Henrich,” SABR Baseball Biography Project).

7 In addition, the Dodgers stole more than twice as many bases (117) as any other National League team and had five of the league’s top eight basestealers, led by Jackie Robinson (37). Robinson also led the National League with a .342 batting average.

13 John Drebinger, “Yankees Triumph Over Dodgers, 1-0, on Henrich Homer,” New York Times, October 6, 1949: 1. Drebinger notes that Newcombe was the first Black pitcher to throw a complete game in a World Series and the first Dodger to do so against the Yankees since Whit Wyatt’s losing effort in Game Five of the 1941 World Series.