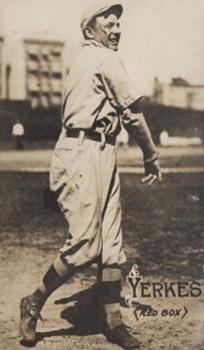 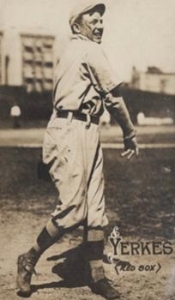 Though the 1912 Red Sox had won 105 games, the Giants weren’t going to be pushovers. They’d won 103 themselves. They had driven in more runs (716 to 654), hit for a higher average, scored more runs, and in Christy Mathewson and Rube Marquard had a couple of 20-game winners.

John McGraw was still the manager for the New Yorkers, as he had been back in 1904. Boston’s American League team had won the first World Series in 1903, against the Pittsburgh Pirates. They won the AL pennant again in 1904, but McGraw and the Giants declined to play them in the postseason. Beginning in 1905, the World Series became an annual tradition. Joshua Pahigian writes, “Red Sox fans still remembered how McGraw had dodged the Boston Americans in 1904 and they believed the Giants manager had deprived them of a world championship that had been rightfully theirs.”1 At least among the fans, there was a bit of a reckoning at stake. At last, the Red Sox and Giants were to meet in the World Series.

The Polo Grounds was home to several baseball teams, most notably the New York Giants until they moved to San Francisco after the 1957 season. Its horseshoe-shaped grandstand and elongated playing area provided for ridiculously short distances down the foul lines and equally ridiculous long distances to the power alleys and center field. So short were its foul-line distances that inches were sometimes included in the measurements: 279 feet, 8 inches to left and 257 feet, 8 inches to right. As for the distance to center (nearly 500 feet), the figure almost could have been rounded to the nearest hundred. The facility was rebuilt in 1911 after a fire; Allan Sangree of Baseball Magazine described it as “the mightiest temple ever erected to the goddess of sport and the crowning achievement among notable structures devoted to baseball.”2

Boston’s Royal Rooters left Boston by train the afternoon of October 7, destined for Game One at the Polo Grounds the following day. They announced their presence upon their arrival in New York, parading in the street with their band and displaying their Royal Rooter banners.

Game One featured the Giants’ stingiest pitcher, Jeff Tesreau. His 1.96 earned-run average led the National League and helped him post a 17-7 record, though the rookie spitballer was, in the words of the Los Angeles Times, “the algebraic X” – an unknown quantity.3 The Red Sox started Smoky Joe Wood. If Tesreau was stingy, Wood was equally miserly with his ERA of 1.91 and an astonishing 34 victories in 38 starts with – perhaps not surprisingly, in light of the ERA – 10 shutouts among them.

Facing the best the National League had to offer, Wood didn’t shut down the Giants’ offense for long. They put the first two runs on the board after two outs in the bottom of the third, when right fielder Red Murray, New York’s leading RBI man (92 for the season), singled in Josh Devore (who had reached on a one-out walk) and Larry Doyle (who had singled to short left field) with a shot of his own into center field. Murray was cut down trying to make it to second base on the play, the throw going from Tris Speaker in center to Red Sox catcher Hick Cady and then back to Steve Yerkes at second.

Tesreau, who had been a trifle shaky when he walked four Red Sox batters during the first three frames, seemed to settle down after going up 2-0.

In the fourth inning, he bracketed a strikeout of first baseman (and manager) Jake Stahl with foul popups from Larry Gardner (foul near third base) and Heinie Wagner (foul near first base).

For 5⅓ innings the Red Sox hit only two balls out of the infield – both easy fly balls. Tesreau had a no-hitter going until Speaker tripled in the top of the sixth. The ball “shot through the racing Fred] Snodgrass’s outstretched hands and rolled to the fence.”4 Duffy Lewis grounded out to second base; Doyle’s only play was to first base and Speaker scored. The Giants still held the lead, 2-1.

In the top of the seventh, the Red Sox struck – and maybe got a break. After Jake Stahl grounded out, Heinie Wagner singled to center, and so did Cady. With runners on first and second, Wood grounded to second base but only the middle runner was retired.

And therein lay the break. Christy Mathewson, in a ghostwritten syndicated column, said it was a ready-made double-play ball to Doyle at second, but “it took a jump away from him and to his right. He was lucky to knock it down and very lucky to get Cady.”5

The Giants had narrowly missed getting out of the inning without a run coming across, but the Red Sox would capitalize on the opportunity. Behind in the count 0-and-2, Harry Hooper hit a “fierce smash”6 of a double over the first-base bag and easily drove in Wagner; Wood held up at third base. With two men in scoring position, Red Sox second baseman Yerkes brought them both home with a single to left field. Speaker struck out, but the Red Sox had added three runs and taken a 4-2 lead.

With one on and two outs in the bottom of the seventh, McGraw replaced Tesreau with pinch-hitter Moose McCormick, who got hold of one but flied out to left field. Doc Crandall relieved Tesreau and retired the Red Sox in the eighth and ninth, giving up only a double to Wagner. Crandall had started 10 games in 1912 but closed a major-league-leading 25 games, finishing with a 13-7 record.

Wood kept the ball in the infield in the eighth with two grounders to shortstop and a popup to Gardner at third, but faltered in the ninth. Fred Merkle swung at the first pitch and hit a one-out single to left, and Buck Herzog singled the other way – to right. Hooper may have failed to fully track it in the late-afternoon shadows.

The third single in a row, by Meyers, scored Merkle, bringing the Giants to within one run, 4-3. Herzog took third and Meyers took second on the futile throw to Cady at home plate. Herzog might well have scored save for Hooper’s fielding the ball barehanded and firing it home in time to hold Herzog on third base.

With runners on second and third and just one out, the game hung in the balance. Joe Wood had been smoked for three consecutive singles, but now he buckled down. First was shortstop Art Fletcher. In his bylined newspaper column, the next day, Wood admitted he’d feared Fletcher would try to squeeze Herzog home from third. But Wood dispatched Fletcher with a strikeout.

The Giants’ final hope was Crandall. He was a good-hitting pitcher; he’d batted .313 during the 1912 regular season and had 19 runs batted in. Wood’s postgame column called Crandall a “hitting pitcher” and acknowledged, “No one can safely take chances with him.”

Crandall worked the count to 3-and-2. Then, as Wood wrote, “I saw that Crandall was standing well away from the plate, and so I put one over the outside corner, which he missed.”7 Strike three. Game over. Red Sox 4, Giants 3. Wood had struck out 11, eight of them looking.

Wood, Mathewson wrote in his own bylined column, showed he was under considerable strain in the ninth and “pitching on nerve alone.” Mathewson said the Giants were not discouraged. He felt the Red Sox had showed a certain lack of aggressiveness and “I don’t think that we will have so much to fear from now on.”8 He didn’t anticipate that this best-of-seven Series was going to go eight games.

The New York Times termed Snodgrass’s play on Speaker’s sixth-inning triple, which led to Boston’s first run, a “blunder” in that Devore was closer to the ball but center fielder Snodgrass called him off.9 Giants manager McGraw agreed, ripping Snodgrass in print in his own newspaper column. He wrote that Snodgrass “turned what should have been a sure out into a three-base hit.”10 McGraw couldn’t have been angling for friends among his men; he also took catcher Chief Meyers to task for failing to catch a foul popup and thus giving Hooper fresh life in the seventh.

Business in New York’s financial district “came to a standstill when the game was in progress.”11 Attendance at the game itself was presented as 35,730.

Game Two was to be held at brand-new Fenway Park in Boston. The ballpark was in its inaugural season and the game was a hot ticket.12 Well over 1,000 fans waited overnight to purchase tickets for the game.13

2 Allan Sangree, “No More War in Baseball, Great Conflicts in the History of the Game, Part II,” Baseball Magazine, September 1911: 24-25.

12 For a detailed look at the 1912 Red Sox and the first year of baseball at Fenway Park, see Opening Fenway Park with Style: The World Champion 1912 Red Sox.

13 The Boston Globe presented a fairly lengthy look at those who were among the early Fenway faithful. See “Stood in Line All Night,” Boston Globe, October 9, 1912: 4.