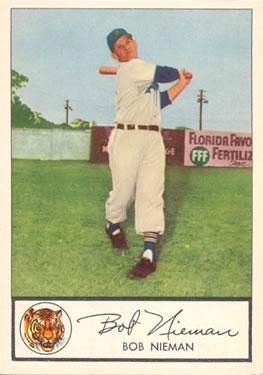 The Boston Red Sox hosted a Friday afternoon game against the St. Louis Browns on September 14, 1951. The Red Sox were still in the hunt for the American League pennant. They were just 3½ games out of first place, and had won a walkoff game against the Browns the day before when Johnny Pesky singled in Dom DiMaggio, who had hit a two-out triple in the bottom of the 10th. Cleveland was in first and the New York Yankees just one game behind the Indians. The Browns were deep in the cellar, 43½ games back.

As it turned out, Ted Williams had the game-winning hit in the Friday game, a two-homer off Al Widmar in the second inning that gave the Red Sox a 7-2 lead. They held on and won, 9-6.

The biggest home-run story of this game, though, was when “a sportswriter hit two home runs in his first two major-league at-bats. Bob Nieman was a 24-year-old journalism student at Kent State who homered in the second and homered in the third, both off Maury McDermott.”1 Nieman drove in four of St. Louis’s six runs.

Nieman had spent most of the year at Triple-A Oklahoma City, where he hit a Texas League-leading .328 with 10 homers in 409 at-bats. He got his call to the majors and this was his debut, playing left field and batting fifth for Zack Taylor’s Browns. He had reported to the Browns that very morning.2

McDermott was the starter selected by Boston manager Steve O’Neill. The young left-hander had broken in back in 1948. He was 22 years old. This was his second full season in the majors. He was 8-6 with a 3.04 ERA. He retired the side in order in the top of the first. In the bottom of the inning, the Red Sox scored five runs for him.

Center fielder Dom DiMaggio walked against right-hander Fred Sanford, who was 4-9 with a 6.35 ERA. Shortstop Johnny Pesky singled to right, with DiMaggio stopping at second base. Williams grounded to second baseman Bobby Young, forcing Pesky at second base.

Right fielder Clyde Vollmer drove home DiMaggio with a single to left. Billy Goodman, Boston’s second baseman, doubled, driving in Williams. The first baseman, Walt Dropo, hit a three-run homer over the wall in left field. Manager Taylor replaced his starter with Al Widmar. The righty had a 13-30 career mark and was 4-9 in 1951 with an ERA similar to Sanford’s—6.47.

Widmar hit the first batter he faced, Fred Hatfield, but closed out the inning without further incident.

Nieman was the second batter up in the top of the second. He hit a solo home run off McDermott, “a long clout high into the left-field net.”3 Singles by third baseman Fred Marsh and first baseman Ben Taylor followed, and Marsh scored the second St. Louis run when shortstop Bill Jennings grounded to shortstop Pesky for a force play at second base.

DiMaggio singled in the second, but Pesky struck out. Williams hit a two-run homer to give the Red Sox their sixth and seventh runs. Most of the 5,466 at Fenway Park were likely pleased to see Williams’s homer, hit some 12 rows up in the bleachers over the visitors’ bullpen. The home run gave him his 119th and 120th runs batted in of 1951.4

With two outs in the top of the third, St. Louis center fielder Ken Wood singled. Nieman came up again. He hit another home run, this one clear over the left-field netting. The score became 7-4 and such Browns fans as there were at the ballpark were no doubt thrilled. They had seen something that had never been done before—a rookie hitting home runs in his first two major-league at-bats.

(It has been done once since, by catcher Keith McDonald over two games in July 2000. In McDonald’s case, it was as a pinch-hitter for another St. Louis team, the Cardinals. His second at-bat was a couple of days later, on July 6, also against the visiting Cincinnati Reds, this time a home run at Busch Stadium leading off the bottom of the second inning.5

McDonald later hit a third home run, on July 15. He had only nine career at-bats, with three hits—every one a home run. Nieman’s career lasted a lot longer, and he hit a total of 125 home runs over 12 seasons.)

In the bottom of the third, Dom DiMaggio helped restore the five-run lead the Red Sox had enjoyed. Fred Hatfield led off with a single. After back-to-back force outs at second base, pinch-hitter Charlie Maxwell (who had hit for McDermott, the pitcher needing to depart due to a muscle pull) was on first base. DiMaggio homered into the left-field net to make it 9-4.

When Nieman came up for a third time, he faced Boston pitcher Willard Nixon. There was one out and catcher Matt Batts was on third base. Matts had doubled and then moved up a base as Ken Wood reached on an error. Nieman didn’t homer but he did collect another run batted in—his fourth in his first three at-bats—with a groundball to third, Wood being forced at second while Batts scored. Nieman had driven in four of the five Browns runs.

Nieman’s fourth time up, there was one out and runners on second and third in the top of the seventh. He bounced a ball to Hatfield at third base, who threw home to force the runner. The batter following him, Marsh, singled and scored Wood. The score was 9-6, Red Sox on top.

In the meantime, Ted Williams had grounded out to third base for the final out of the third inning and singled to right field to lead off the sixth. He moved up 90 feet, then 90 feet again, but never made it past third base.

Williams’s final at-bat came in the bottom of the eighth, facing reliever Satchel Paige, a pitcher the 33-year-old Williams had first seen pitch in San Diego when “The Kid” was still a teenager. Williams struck out. He was far from pleased with himself.

“Paige was 44 at the time, and he fooled Ted, who’d swung at a pitch outside the strike zone,” reported the Boston Globe. “Angry at himself, Williams ‘smashed his bat into pieces. He first whacked it against the railing of the runway leading to the dressing room. When that didn’t suffice, Williams flung the bat towards the rack. He still wasn’t satisfied, so he smashed it on the floor of the dugout. That ended the bat’s worth for good. All the while Williams was doing his rail-splitting act, ol’ Satchimo [sic] was laughing his head off on the mound.’”6

After the game, Paige said, “I’ve never seen anything like it in the big leagues. He was sore because I crossed him up.”7 Williams had anticipated Paige’s patented slowball but got a fastball instead. “I don’t throw to any hitter’s strength,” Paige said. “If Ted’s going to hit home runs off me, he’s going to hit them over the left field fence.”8 Williams faced Paige 10 times. He was 2-for-7, both singles, with two walks, one intentional.

On his own initiative, Nieman bunted for a single in the top of the ninth.10 Nothing came of it.

Ellis Kinder, who had worked the end of the game, was awarded the win, his record improving to 11-2. Sanford bore the loss. The Red Sox season record against the Browns improved to 15-6.

The Yankees overtook the Indians and won the pennant by five games. The Red Sox finished third, 11 behind, and the Browns finished in last place, 46 games behind the Yankees.

After his playing days were done, Nieman—with a lifetime .295 batting average—went on to more than 20 years as a scout.

Ted Williams notably devoted a portion of his 1966 acceptance speech on his induction into the National Baseball Hall of Fame expressing his hope that some of the great Negro Leagues players such as Satchel Paige and Josh Gibson would one day also be recognized in Cooperstown.11

1 Bill Nowlin, 521—The Story of Ted Williams’ Home Runs (Cambridge, Massachusetts: Rounder Books, 2013), 187. For information on Nieman’s background and some of his comments on the game, see Will Cloney, “Home Run Hitting Nieman Studying to Write Sports,” Boston Herald, September 15, 1951: 5. The first home run was a solo shot, the second a two-run homer.

4 It was the third home run Williams hit off Widmar that year (the only three he ever hit off Widmar); Williams had homered at Fenway Park on June 17 and at Sportsman’s Park on July 16. Both had also been two-run homers, and both in the first inning. The June 17 one was a game-winner.

6 Clif Keane, “Browns Rookie Makes Home Run History; Ted Has Tantrum as Ol’ Satch Fools Him,” Boston Globe, September 15, 1951: 4, as quoted in Nowlin. The Globe ran a photo of Nieman with comedian/coach Max Patkin, who had worked in the coaching box for one inning.

11 Williams’s handwritten notes for the speech may be seen here: https://collection.baseballhall.org/PASTIME/ted-williams-baseball-hall-fame-induction-speech-1966-july-25#page/1/mode/1up.