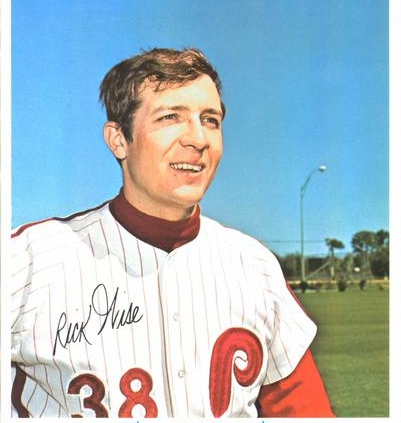 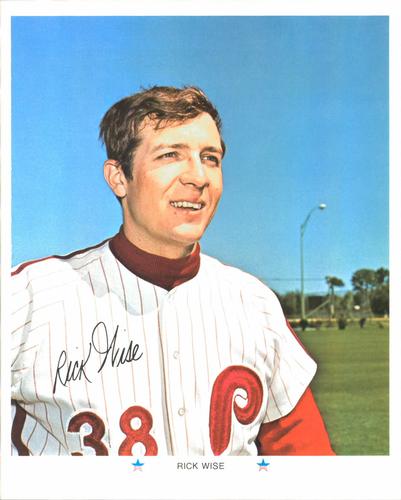 Rick Wise was a welcome success story for the Philadelphia Phillies. After he pitched his Portland, Oregon, high school to a state championship in 1963, the Phillies signed the 17-year- old to a major-league contract. Based on his $12,000 signing bonus, Wise was considered a “bonus baby.” The rules at the time required that he be protected by the parent club for one year or be subject to the draft. He spent 1964 with the big-league club, determined to be more than just another pitcher. “I want to be a lot better than that,” he said.1 He toiled the next year and a half in the minors refining his repertoire. Recalled in June 1966, he won 53 games over the next five years.

By 1971 Wise was finally exhibiting the potential predicted when he signed. On June 23 he pitched a no-hitter against the Cincinnati Reds and supported himself with two home runs. He was on the way to a career-best 2.88 ERA. Manager Frank Lucchesi took notice and in late August said, “Rick has developed into a stopper for our staff. I think he’s really come along now and is headed for big things. He’s only 25, but he’s matured into an outstanding pitcher.”2

On a cloudy September Saturday in Philadelphia, Wise took the mound for the Phillies, looking for his 16th win. His opponent, Milt Pappas, was also having a fine year for the Chicago Cubs with a 17-13 record at that point.

The game began as another unremarkable day for the 7,740 fans in attendance. The Phillies, mired in sixth place in the National League East, were down by two runs before they came to bat in the bottom of the first inning. After Wise retired the first two batters on groundouts to shortstop, Pat Bourque drove his eighth pitch of the game over the right-field wall to put the Cubs on top.

Twenty-year-old first baseman Greg Luzinski prolonged the inning by dropping Deron Johnson’s throw on Ron Santo’s grounder to third. Paul Popovich moved Santo to third with a single to right. Gene Hiser drove him in with a single to center, giving the Cubs a 2-0 lead.

The Phillies cut the lead in half in the bottom of the inning on Oscar Gamble’s home run, but the Cubs restored their two-run advantage when Frank Fernandez led off the top of the second with a home run to deep left field.

Fernandez’s home run prompted pitching coach Ray Rippelmeyer to visit the mound. This proved to be a turning point in the game.3 Wise retired the next Chicago batter, Hector Torres, on a grounder to first. Two quick outs followed, ending the inning. The ballpark fans had no idea that over the next 10 innings they would be witnessing history.

After the three outs in the second, Wise set down the order in the third … and the fourth … and the fifth … all the way through the eighth. His 21 consecutive outs over this span included eight strikeouts and only two fly outs, both off the bat of Bourque.

Meanwhile, Philadelphia attempted to rally. The Phillies stroked two singles in the second but stranded both runners. In the third, Gamble led off with a single to right and moved to third on Tim McCarver’s single to left-center. Gamble scored when Johnson grounded into a double play. Willie Montanez followed with another single but was left stranded when Luzinski struck out. The Phillies trailed by one run, 3-2.

The game settled into a pitchers’ duel between Wise and Pappas. Luzinski stroked a single in the sixth and Larry Bowa singled to center in the seventh but both runners were stranded. Through seven innings, the Phillies left six runners on base and would end up stranding 10 more before the game was over.

The Phillies finally broke through to tie the game in the bottom of the eighth. McCarver, who was guiding Wise’s mastery from behind the plate, reached base on a single up the middle, his second hit of the day. Johnson moved McCarver to third with a single to left-center and the Phillies had runners on the corners with no outs. Montanez drove a pitch to deep left, missing a three-run homer, but deep enough to score McCarver with the tying run. Pappas now stiffened, stranding Johnson at first by striking out Luzinski and getting Don Money to fly to left.

After Wise retired the Cubs in order in the top of the ninth, he tried to win the game for himself in the bottom of the inning. Wise was becoming known nationally not only for his pitching but also for his bat. In addition to his two home runs in the June no-hitter, he hit two more in an August win over the San Francisco Giants.

This time Wise stepped to the plate with one out and belted a double to left, his second hit of the day. Wise represented the winning run, but the Phillies did not bring him home. Bowa grounded to Pappas for the second out. After Gamble drew a walk, McCarver stranded the runners with a routine fly ball to right.

The game headed to extra innings with both Wise and Pappas still dueling. Wise’s streak continued when he set down the Cubs in the 10th on four pitches. Gamble hauled in Hiser’s fly to deep left-center for the 26th out of the streak. When Fernandez followed by flying out to Anderson, Wise’s streak reached 27, a “perfect game” worth of Cub batters.

The Phillies threatened to win the game in the bottom of the inning. Johnson led off with a single and pinch-runner Terry Harmon stole second, but Pappas was again up to the challenge. Montanez and Luzinski struck out swinging. After Money was intentionally walked, pinch-hitter Ron Stone grounded out to first to end the inning.

Wise again retired the side in order in the 11th, running his streak to 30 consecutive batters. One of the outs was Billy Williams, batting for Pappas. Phil Regan relieved in the bottom of the inning. He allowed a single to Bowa and a walk to McCarver but the Phillies failed to score.

Still going strong in the 12th, Wise started the inning by getting Carmen Fanzone to ground out, the 31st Cub in a row retired by Wise. After Bourque struck out looking, Wise’s streak reached 32 consecutive outs, the second longest perfect streak in baseball history.4 Santo’s single to left broke the streak, but Wise recovered, getting Popovich to pop up for the third out.

Montanez led off the bottom of the 12th with an infield single to third. Santo’s throw went past first, allowing Montanez to take second. Luzinski, having stuck out three times, now played “small ball” by sacrificing Montanez to third with a perfect bunt to the pitcher.

The Cubs loaded the bases by intentionally walking Money and Stone, bringing Wise to the plate. Lucchesi let Wise hit for himself. The decision was rewarded when Wise placed a soft single to center over a drawn-in infield, his third hit of a memorable afternoon, to plate the winning run.

Discussing his performance after the game, Wise stoically commented, “I’d have to rank that as one of my all-time wins. They had beaten me three times, and roughed me up in two of them, and that plus the fact that I was going for my most wins made it big.”5 He finished 1971 with 17 wins, the most of his career to date.

After the season, the Phillies traded Wise to the St. Louis Cardinals during a salary dispute. The trade netted Steve Carlton, who turned out to be the cornerstone of Philadelphia’s pitching staff for over a decade. Wise ended his Phillies tenure with 75 wins, providing solid pitching during a down stretch for the team.

In addition to the sources cited in the Notes, the author relied on Baseball Reference and Retrosheet.

3 Discussing the game in a 2019 interview with Larry Shenk, Wise recalled, “After the home run by Fernandez to start the second inning, I got a visit from pitching coach [Ray Rippelmeyer]. Don’t remember what he said but something clicked and I retired 32 in a row.” Larry Shenk, https://mlb.com/phillies/news/phillies-alumni-rick-wise-32-outs-in-row.

4 Harvey Haddix of the Pittsburgh Pirates retired 36 consecutive batters in a game on May 26, 1959, against the Milwaukee Braves.