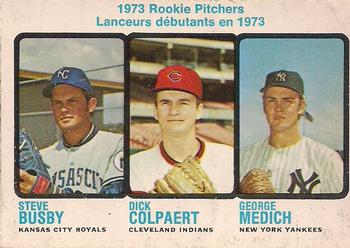 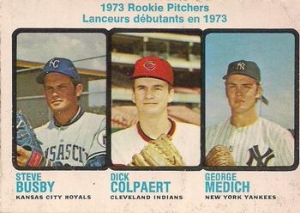 Steve Busby, who shined briefly but brightly on the Kansas City Royals’ pitching staff in the mid-1970s,1 is best remembered for his two no-hitters – one in his 10th major-league start in April 1973, the other in his second full season in June 1974. His 1973 no-no was the first in Royals history.2

Even before those pitching triumphs, Busby’s bat earned him a spot in the Royals’ record book. Busby and fellow pitcher Paul Splittorff, his roommate on the road, each collected three hits in a game in 1972 – Splittorff in May, Busby in September. At the start of the 2021 season, almost a half-century later, no other Kansas City pitcher had managed the feat, and Busby and Splittorff still shared the Royals’ record for the most hits in a game by a pitcher.

(Obviously, the American League’s adoption of the designated hitter in 1973 took the bats out of pitchers’ hands for many years. AL hurlers regained opportunities to hit when Major League Baseball introduced interleague play in 1997. The potential adoption of the universal DH – discussed but not implemented as of the 2021 season – could once again turn Royals pitchers into permanent offensive spectators.)

Busby’s outburst at the plate was only part of the story when the Royals met the California Angels at Anaheim Stadium on September 20, 1972. The American League West rivals played a raucous and eventful game that saw three ejections. Two of them resulted from a first-inning play with – who else? – Busby at bat.

The Royals and Angels came into the game jostling for position in the lower reaches of their division. Bob Lemon’s Royals stood in fourth place, 14 games behind first-place Oakland, with a 69-71 record – a reversal of fortune from 1971, when Kansas City sat in second place with an 82-71 record on the same date.3 Reasons for the decline included the reduced effectiveness of the bullpen, poor offensive seasons by shortstop Freddie Patek and third baseman Paul Schaal, and stiffer competition from other teams, including the improved Chicago White Sox.4

Del Rice’s Angels entered the game with a 67-75 record, in fifth place, 17 games back. By comparison, the team had been 72-81 on the same date a year before, for a nearly identical winning percentage. Probably the season’s biggest story in California – besides the departure-by-trade of controversial outfielder Alex Johnson5 – was the blossoming of newcomer Nolan Ryan into a staff ace in his first year with the Angels. On September 20 Ryan led the AL in shutouts and strikeouts as well as walks and wild pitches. At season’s end, he still led in all four categories, racking up a 19-16 record and a 2.28 ERA.

Lefty Rudy May started for California, bringing a 10-10 record and a 2.80 ERA into the game, as well as a streak of five straight complete-game wins in which he had surrendered just three earned runs in 47 innings.6 The Angels’ lineup also included center fielder Mickey Rivers, in his third season and not yet a regular, and left fielder Doug Howard, appearing in his ninth major-league game.

For the visitors, Busby was making just his third big-league appearance. The 22-year-old Southern California native had a record of 1-0 and a 1.69 ERA. Lemon penciled in his most frequent starters, with the exception of backup catcher Carl Taylor spelling Ed Kirkpatrick and center fielder Steve Hovley in place of Amos Otis.7 Hovley, known for his frequent appearances in Jim Bouton’s Ball Four, was used extensively as a pinch-hitter, pinch-runner and defensive caddy. He played in 105 games for the 1972 Royals but collected only 196 at-bats.

The 4,117 fans who turned out for the Wednesday night game saw May’s winning streak end quickly and painfully. He started the game by walking Schaal, second baseman Cookie Rojas, and right fielder Richie Scheinblum. First baseman John Mayberry belted May’s first pitch to him 460 feet over the right-field fence, nearly hitting the Royals’ parked bus, for his first major-league grand slam.8 May then walked left fielder Lou Piniella, and when he also fell behind to Taylor, Rice called on reliever Lloyd Allen to replace him. Allen completed the walk to Taylor.

Showing what seems in retrospect like tremendous generosity, Hovley laid down a bunt to move Piniella and Taylor to third and second. Patek, hitting .218, drew still another walk – this time, intentional – to bring Busby to the plate. Busby drove a pitch over the left-field fence for what would have been Kansas City’s second grand slam of the inning, as well as his first big-league hit.

But first-base umpire John Rice had called time just before the pitch, so Busby’s shot did not count. Rice had ejected the Royals’ Jerry May for needling him from the dugout,9 and the umpire halted the game to force May to leave the dugout and go to the clubhouse. Not surprisingly, the poorly timed time-out sparked a storm of outrage from Lemon, who was ejected. Pitcher Dick Drago also got the thumb for throwing a towel onto the field.10 After the game, Lemon conceded that the umpire was right: “I heard him call time out, but hell, I had to get mad at somebody.”11

When tempers cooled and the game resumed, Busby couldn’t duplicate his grand slam. But he singled to left-center field, scoring Piniella and Taylor. Schaal, the inning’s 10th hitter, grounded into a 6-4-3 double play for the final two outs. The Royals held a 6-0 lead on only two hits; all runs were charged to May, who failed to retire a batter.

After an uneventful turn at bat by the Angels, the Royals continued to score in the second. Rojas walked again, Scheinblum doubled him to third, and Allen intentionally walked Mayberry. Piniella singled to right field. That scored Rojas, reloaded the bases, and chased Allen in favor of righty Tom Dukes. In the 161st and final appearance of his six-season major-league career, Dukes got Taylor to ground into another 6-4-3 twin killing, scoring Scheinblum. He then retired Hovley on a grounder to second. Kansas City led 8-0.

For reasons not explained in the next day’s stories, Rojas left the game at this point,12 with former All-Star and Gold Glove winner Bobby Knoop taking his place at second base. It was the last of Knoop’s 1,153 major-league games.

Busby later admitted that he got “careless” in the third inning, losing his concentration.13 The Angels made him pay, starting with a single by shortstop Leo Cardenas and a walk to catcher John Stephenson. Outfielder Chris Coletta, playing his 12th of 14 career big-league games, hit a pinch single that Piniella bobbled for an error.14 Cardenas scored and Stephenson took third. Second baseman Sandy Alomar’s grounder to first brought in Stephenson with the Angels’ second run. Busby got Rivers and right fielder Vada Pinson to pop out to hold the score at 8-2.

The game settled down through the end of the seventh, with Busby and California relievers Alan Foster and Dave Sells scattering hits but allowing no runs. Busby collected his second hit, a double, off Sells in the sixth. He moved to third on a grounder but was stranded there.

The Royals mounted one last rally with two out in the eighth. Patek singled, stole second base, and scored on Busby’s single to center field for a 9-2 lead. The Royals pitcher had driven in more runs than the entire Angels lineup. Busby’s final RBI was the fourth and last of his big-league career. He pitched two more games in 1972 and came to bat six more times without a hit, in his final plate appearances before the advent of the DH.

The Angels got two runners aboard in the eighth on a single and a walk, and third baseman Billy Parker singled in the ninth, but the runners did not advance. Busby closed out the action in 2 hours and 25 minutes, scattering seven hits, walking two, and striking out two.

Kansas City finished the year in fourth place at 76-78, with California right behind at 75-80. Both teams fired their managers shortly after the season ended. When the Royals reconvened for 1973, a platoon of batters including Gail Hopkins, Hal McRae, and Rick Reichardt were doing the hitting in place of Busby and his fellow pitchers.

In addition to the specific sources cited in the Notes, the author used the Baseball-Reference.com and Retrosheet.org websites for general player, team, and season data and the box scores for this game, as well as the 2020 Kansas City Royals media guide, accessed online on February 11, 2021.

1 Busby was considered one of the most promising young pitchers in the American League in the 1970s. He won 56 games from 1973 to 1975, including a 22-14 record in 1974. But a torn rotator cuff, a right knee injury, and other physical problems prematurely ended his career.

2 Busby’s 1973 no-hitter was acclaimed at the time as the first major-league no-hitter by a Kansas City pitcher – though, of course, the perspective of the ’70s did not take the Negro Leagues or the Federal League into account. Alex Main of the Federal League’s Kansas City Packers threw a 5-0 no-hitter against the Buffalo Buf-Feds on August 16, 1915. BR Bullpen lists three nine-inning no-hitters and one seven-inning no-hitter by Kansas City Monarchs pitchers between 1923 and 1949, two of which were multi-pitcher efforts.

5 Johnson was benched, fined, and suspended at various points of the 1971 season for failing to hustle and showing hostility toward his teammates. The emotional problems underlying Johnson’s behavior, as well as the racism shown by officials in dealing with him, were not fully understood at the time. For a summary of the turbulent season, see Johnson’s SABR biography, written by Mark Armour.

7 Otis was suffering lingering effects from being hit by a pitch a few days earlier against the Minnesota Twins. “Nelson to Start,” Kansas City Times, September 21, 1972: 2D.

9 Busby’s SABR biography, written by John DiFonzo, has Splittorff later confessing to Busby that Splittorff did the heckling but May got ejected for it.

10 “Busby Loses Slam but Wins Easily over Angels, 9-2,” Los Angeles Times, September 21, 1972: Section 3, 1. This story, Sid Bordman’s story in the Kansas City Star, and Retrosheet’s game summary all say the time-out was related to May’s ejection. An unbylined game story in a different edition of the September 21 Los Angeles Times tells a different version of the story, saying Rice called time so Patek could go back to the dugout and get a different helmet to wear while running the bases.

12 Rojas started the following night’s game, so he was not seriously injured; the move may have been precautionary.