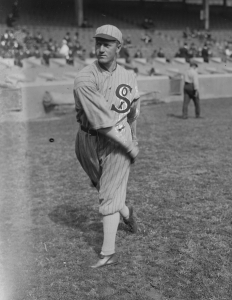 In a battle of the seventh- and eighth-place teams in the American League, the Chicago White Sox took out all the frustration of an 11-game losing streak on four hapless Philadelphia Athletics pitchers to win 18-1, in the second game of a doubleheader. White Sox ace and future Hall of Famer Red Faber finally won his 25th game of the season after notching his 24th nearly a month earlier. Faber was making only his second start in September; a knee had popped out of joint after his winning appearance on August 31 against the St. Louis Browns.1 But his teammates made the victory easy for him.

Philadelphia had beaten Chicago 7-4 in the first game of the Saturday afternoon doubleheader. With little over a week remaining in the 1921 campaign, the White Sox, two seasons removed from winning the American League pennant and losing the Black Sox World Series to the Cincinnati Reds, had lost 11 in a row, including a doubleheader sweep by the A’s a day earlier by a combined score of 13-1.

Faber’s opposing pitcher as the A’s aimed for their fourth win in a row over the White Sox was Harvey Freeman, a rookie making the fourth start and 17th appearance of his career. He came into the game with a 7.33 ERA and watched it go up to 7.99, while failing to escape the first inning. Freeman retired the first two hitters, Hervey McClellan2 and Amos Strunk, easily on a groundball and a pop foul respectively, but things quickly fell apart. Eddie Collins tripled, Harry Hooper walked, and both scored when Earl Sheely doubled. Then Johnny Mostil walked and stole second base, Eddie Mulligan was hit by a pitch to load the bases, and Ray Schalk singled, scoring Sheely and Mostil. Harvey Freeman was excused from further competition with the score 4-0.

Freeman was replaced by another rookie pitcher, Lefty Wolf, making his eighth and final major-league appearance. Both Freeman (Western Michigan) and Wolf (Lebanon Valley College) were college recruits whom A’s manager Connie Mack threw into major-league battle with no minor-league experience. Wolf escaped the first inning mostly because Mulligan got frisky and, after stealing third base, was thrown out trying to steal home.

Wolf was not so lucky in the second inning. He walked the first four batters, managing to throw only three of 21 pitches for strikes,3 before Hooper’s single scored two more runs. That was the end of Wolf’s day and he was replaced by right-hander Dave “Three-Fingered” Keefe.4 Keefe gave up a two-run double to Sheely before finishing the inning with three groundball outs, one of which scored Sheely. After two innings the White Sox had gifted Faber with a 10-run lead.

Keefe managed to restore some order to the game, and it remained 10-0 until the White Sox batted in the fifth inning. After two were out, McClellan, Strunk, and Collins singled in succession, leading to one run; another run came in on a wild pitch by Keefe. With his team down by 12-0, Mack decided it would be a good time to rest some of his regulars. Dot Fulghum batted for Jimmy Dykes and struck out. Paul Johnson batted for Tillie Walker and flied out to right. Reserve catcher Glenn Myatt ended the inning by grounding out.

In the bottom of the sixth, consecutive singles by the A’s Chick Galloway and Bill Barrett put runners on first and second with one out. The threat was quickly extinguished, however, when Frank Brazill struck out and Galloway was caught trying to steal third on the play. (Just what Galloway was trying to do by attempting to steal with his team behind by 12 runs has not been recorded by history.)

In the seventh, the White Sox got to Keefe for three more runs. With one out McClellan doubled and Strunk homered to left. Collins walked and moved all the way to third on a wild pitch. From there, Hooper drove him in with a sacrifice fly. At the end of seven the score stood at 15-0.

Twenty-year-old lefty Bill Bishop and his 7.20 ERA replaced Keefe on the mound for the A’s in the eighth and managed a clean inning. He was not as fortunate in the ninth, however, when poor fielding and poor pitching combined to allow the White Sox to score three more runs. With one out, Strunk singled. He scored when second baseman Barrett threw away Collins’s potential double-play groundball, with Collins moving to second base. After Hooper grounded out, Sheely delivered his fourth hit of the day, a single to left that scored Collins. When left fielder Johnson threw home wildly, Sheely moved up to second, and he scored on Mostil’s double. Going into the bottom of the ninth the score stood at 18-0.

Faber lost his bid for the 18th shutout of his career in the ninth. With one out, Barrett doubled to center field and moved to third when Brazill grounded out. With two outs and a man on third, Mack allowed pitcher Bishop to bat for himself. A Faber pitch got past catcher George Lees for a passed ball, allowing Barrett to score. Lees had come into the game as a pinch-hitter in the eighth inning, replacing the starting catcher, Ray Schalk. (This was the only passed ball of Lees’ 20-game major-league career.)

In tallying 18 runs, the White Sox rapped out 17 hits, including five doubles, a triple, and a home run. Rookie first baseman Earl Sheely had one of the finest offensive days of his nine-year major-league career, going 4-for-6 with two doubles. five RBIs, and three runs scored. Philadelphia native and former A’s center fielder Amos Strunk celebrated his homecoming with three hits, including his third home run of the season. The White Sox also took advantage of the eight walks given up by Athletics’ pitchers. Of the eight batters walked, seven scored.

In the end, the lopsided result of this game should not have been a surprise. Connie Mack, in one of his periodic cost-saving modes, trotted out some of the least experienced pitchers in the history of major-league baseball for this game. Freeman, Wolf, and Bishop were all young and ill-prepared, having had no minor-league experience at all. None of the three pitched in the major leagues again after the 1921 season. These neophytes were up against a team that, while having a poor year and still trying to recover from the Black Sox scandal, was stacked with veterans and four future Hall of Famers, Collins, Hooper, Schalk, and Faber.

Although they won this game, it took the White Sox many years to recover from the Black Sox scandal and put a truly competitive team on the field. They remained a second-division club in the American League until 1936, when they finished fourth. By contrast, the A’s improved steadily and were pennant contenders by 1925 and pennant winners for three straight years starting in 1929, winning the World Series in 1929 and 1930. By that time only one player who appeared in this game was still on the team, second baseman Jimmy Dykes. Red Faber spent another 12 mostly productive seasons pitching for the White Sox and compiled a lifetime 254-213 record. Faber was elected to the Hall of Fame by the Veterans Committee in 1964.

In addition to the sources cited below the author consulted Baseball-Reference.com and Retrosheet.com.

4 Keefe lost most of his middle finger in a childhood encounter with a corn-cutting machine. The injury gave him his nickname and also allowed him to hold a ball between his first and ring fingers, giving it an unusual spin. Tom Simon, “Dave Keefe,” SABR BioProject, https://sabr.org/bioproj/person/dave-keefe /, accessed on June 28, 2021.