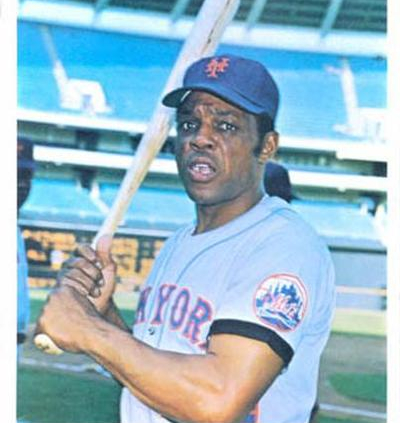 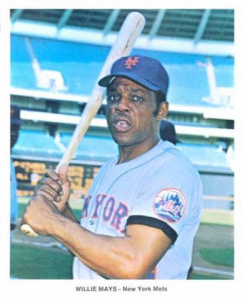 Willie Mays returned to New York when the San Francisco Giants traded him to the Mets on May 11, 1972.1 “It’s a wonderful feeling to be coming back here,” said Mays, who left with the Giants for California after the 1957 season. “I’ve always loved New York and I liked San Francisco, but this is like coming back to paradise.”2 Mays played in 69 games with the Mets in 1972, batting .267 with 8 home runs.

But the skills that led him to the pinnacle of baseball’s heights were diminishing. At age 42 in 1973, Mays batted only .211 in limited duty. His next move was a difficult decision. “Baseball is my life. It’s not something that you can just walk away from and say good-bye to,” he told his teammates.3

Mays announced his retirement on September 20 on the Today TV show. That afternoon, he held a press conference at Shea Stadium. He had not seen game action since he was injured on September 9.4 “I thought I’d be crying by now,” Mays said. “But I see so many people here who are my friends.” He told his audience that he was hanging up his uniform “because when you’re 42 and hitting .211, it’s no fun. I just feel that the people of America shouldn’t have to see a guy play who can’t produce.”5

The Mets were on a roll by the time Willie Mays Night arrived on September 25. They had won 17 of 23 games in September to move from fifth place to first in a crowded National League East Division race. The official attendance was listed at 43,085, but most accounts said more than 53,000 fans showed up. New York Mayor John Lindsay had earlier declared the day Willie Mays Day.

Mets broadcaster Lindsey Nelson was the emcee for the evening’s event. The celebration started at 8 P.M. when Mays came out of the Mets dugout and walked to home plate. The crowd rose to its feet and applauded him for six minutes as the scoreboard lit up with “SO LONG, YES; GOODBYE, NEVER.”

Mays was presented with numerous gifts. Golf clubs, his-and-hers snowmobiles, lifetime supplies of records, scotch, and champagne, two trips, and enough clothing for him and his wife, Mae, to fill up several closets.7 Giants owner Horace Stoneham was there to give Mays a Mercedes Benz.

“Old teammates, old rivals, friends, and the hierarchy of sports and politics turned out to pay tribute to the weary, ailing old warrior,” an Associated Press sportswriter observed.8 Pee Wee Reese and Duke Snider9 were there. Bobby Thomson and Dusty Rhodes showed up. Larry Doby and Joe Black, who had barnstormed with Mays early in his career, were there. Joe DiMaggio and Stan Musial stood among the luminaries at home plate.

After others had showered him with praise, it was time for Mays to address the fans. First he apologized for delaying the game. Then he said, “This is a very sad night for me. I may not look it but in my heart I’m sad because I hear you cheering for me and I am unable to do anything for you.”10

He continued, “I look at the kids over here and they are playing and they are fighting for themselves tells me one thing: Willie, say good-bye to America.”11 Mays hugged Mae and his son, Michael. He raised his cap and saluted the crowd as they shouted back their admiration. As he slowly walked back to the dugout, organist Jane Jarvis played “Auld Lang Syne.”

Mets left fielder Cleon Jones, like Mays an Alabama native, was watching in the dugout. “I felt I wanted to cry,” he said later. “I know how Willie must have felt to say he can’t perform anymore. It got next to me. I think I might have dropped one or two tears. It was one of those times when you cry inside.”12

The Mets then took the field to face the Montreal Expos, who had worked their way into the division’s crowded playoff chase before losing eight of their last nine games. Left-hander Jerry Koosman started for New York. Like many of his teammates, Koosman had surged in September, going 4-1 with a 2.83 ERA to improve his record to 12-15.

He continued his effective work against the Expos. Montreal managed one hit through the first four innings and didn’t couldn’t score. Two Expos singles followed in the fifth, but no runners crossed the plate.

Rookie right-hander Steve Rogers started for the Expos. He entered with a 9-4 record and a 1.32 ERA.13 Rogers matched Koosman and kept the Mets from scoring through the first four innings.

The Mets broke through in the fifth. Bud Harrelson led off with a single and took second on Koosman’s sacrifice. Wayne Garrett singled to put runners at the corners. Felix Millan followed with a sacrifice fly to left that plated Harrelson.

Montreal tied the score in the sixth. Ron Woods singled with one out and stole second. After Bob Bailey walked, the Expos attempted a double steal, but Jerry Grote gunned down Bailey at second as Woods took third. It looked as if Koosman would escape the inning when Hal Breeden grounded to third, but Garrett threw wildly to first for an error. Woods crossed the plate, tying the game, 1-1.

The Mets reclaimed the lead in the bottom of the inning on Jones’s one-out home run that sailed 400 feet into the left-field bullpen. Jones later said that Mays was one of his childhood heroes while he grew in Mobile and he was pleased that he could provide the winning hit.

“When you played as a kid, did you pretend that you were Willie Mays?” Jones was asked. He said he followed fellow Mobile native Hank Aaron more closely but “[i]t depended if I got to the ballgame early or late. If I got there late, somebody else was Willie Mays and I had to be somebody else.”14

Koosman got in trouble in the seventh. After a pair of two-out singles put the tying run in scoring position, Mets manager Yogi Berra called on Tug McGraw.  The first batter he faced was Felipe Alou, who hit a long fly ball to left-center.

Jones got a good jump and caught the ball while running at full speed with his arm fully extended. He later said that he “cheated a little. I found myself a dry spot of grass in that wet outfield and I stayed there though I was a little out of position. When he hit it, I got a good start.”15

After Mike Marshall,16 making his 88th appearance of 1973, relieved Rogers in seventh and held the Mets scoreless, McGraw got into an eighth-inning jam. He gave up a leadoff single to Woods, then walked Bailey. But Breeden hit a grounder back to McGraw, who threw out Woods at third. The lefty reliever ended the threat by retiring the next two Expos.

The Mets had another chance to score in the bottom of the eighth. Jones walked with two outs and Don Hahn doubled, but Jones was thrown out trying to score.

McGraw retired the Expos in order in the ninth, notching his ninth save of the month as he helped Koosman earn his 13th win of the season.

The Mets now had a seven-game winning streak, giving them a 1½-game lead over the Pittsburgh Pirates. The loss left the Expos 4½ games back in the NL East.

Mays watched the game from the dugout. With the pregame ceremony, he felt as though he was retired from baseball. Mays spoke to owner Joan Payson afterward and told her he was planning to return home. A Mays biographer wrote: “She urged him to reconsider. ‘You can’t go home now,’ she said. So he stayed.”17

Although he did not get into another regular-season game, Mays played four more games in the postseason before he hung up his uniform for good. He had three hits and two RBIs for the Mets, who upset Cincinnati in the NL Championship Series before losing the World Series to the Oakland Athletics in seven games.18

In addition to the sources cited in the Notes, the author used the Baseball-Reference.com and Retrosheet.org websites for box-score, player, team, and season pages, pitching and batting logs, and other pertinent material. The author also viewed Mays’ farewell speech on MLB.com, which can be accessed at https://www.mlb.com/video/mays-speaks-on-his-night-in-1973.

1 The San Francisco Giants traded Mays to the Mets for Charlie Williams and $50,000. “‘We’re hopeful that Willie will help us this year and maybe next,’” said Mets President M. Donald Grant. “‘We’ve insured him of his baseball future, and I personally hope he’s here for the rest of his baseball life.’” Red Foley, “Mets Deal Brings Willie ‘Back to Paradise,’” New York Daily News, May 12, 1972: 95.

4 Mays cracked two ribs while chasing a foul ball in a game in Montreal.

7 Newspapers reported on the many gifts he received. Other gifts that were mentioned: two limousines, 100 record albums, a lifetime supply of Atlantic Records recordings, lifetime supplies of Teachers Scotch and Moet Champagne, a set of luggage, a Fisher console stereo system, a private telephone system, a collection of Willie Mays dolls and games, bedsheets, towels, and bedspreads, numerous clothing outfits, a silver tray, a trip around the world, a trip to Mexico, a typewriter, a mink coat and watch for his wife, Mae, an honorary doctorate from Miles College in Alabama.

9 Snider was attending the game in his role as a broadcaster for the Expos.

13 Rogers eventually finished second in the Rookie of the Year voting to Gary Matthews.

16 Marshall would make 92 appearances that season to lead the league for the second time as many years. Marshall set the record for relief appearances (106) in 1974 when he played for the Dodgers. He also led the league in saves in 1973 and 1974.

18 Perhaps even more significant than his play on the field was the role Mays played in the third game of the NL Championship Series. Cincinnati’s Pete Rose tried to break up a double play in the fifth inning with a hard slide into second. He knocked down New York shortstop Bud Harrelson, who jumped up and charged Rose. Both benches emptied and the two teams brawled for over five minutes before the umpires separated the players. When Rose took the field in the sixth, Mets fans pelted him with all sorts of items. After he was almost hit with a bottle, Rose walked off the field. Cincinnati manager Sparky Anderson said he wouldn’t continue the game until his players were safe. When the Mets public-address announcer asked the fans to stop, they ignored him with a chorus of boos. National League President Chub Feeney consulted with umpires and asked Mets manager Yogi Berra to send out a player to calm the crowd. Berra chose Mays and when Mays left the dugout, the fans cheered him. He gave the peace sign to the fans and pointed to the scoreboard, reminding them that the team was ahead 9-2. Then he went down the foul line along with Staub, Seaver, and Jones. Mays shouted to the fans, ‘We’re ahead! Let ’em play the game.’” Hirsch, 525.