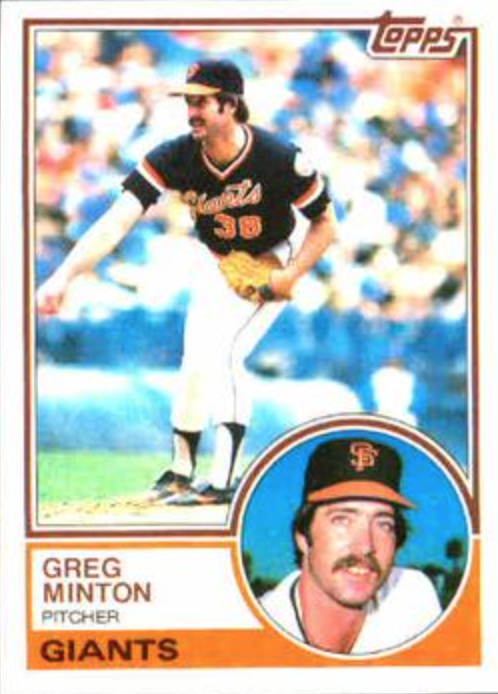 Greg Minton did everything for the San Francisco Giants during the 1982 season, including stealing the team bus. More about that later.

The right-handed relief ace achieved a milestone when he recorded his 30th save of the season in the Giants’ come-from-behind 5-4 victory over the Los Angeles Dodgers on September 25 at Dodger Stadium.

With the win, the Giants — celebrating their 25th season in San Francisco — continued their September surge. A 7-6 loss to the Chicago Cubs on September 1 had dropped fourth-place San Francisco nine games behind the first-place Atlanta Braves in the National League West Division with a 66-67 record. Over the next three weeks, however, the Giants won 16 of 20 games, catapulting them to within four games of first — now held by the defending World Series champion Dodgers — when they began a pivotal three-game series in Los Angeles on September 24. The Braves had fallen to second, setting up an unforeseen three-team race over the final 10 days.

The Giants inched a game closer when they rallied for a 3-2 win in the series opener. Minton picked up his 29th save, retiring all six batters he faced. Atlanta, meanwhile, beat the San Diego Padres, 11-6, to tighten the race even further.

The Dodgers led the Braves by two games and the Giants by three, and they sent their ace, Fernando Valenzuela, to the pitcher’s mound for the Saturday matinee, pursuing his 20th win of the season.

San Francisco struck first with solo runs in the second and third innings off Valenzuela. Jeff Leonard and Reggie Smith had run-producing singles. The Dodgers tied the game with runs in the third and fifth against Giants starter Jim Barr — both coming on RBI hits by Bill Russell — and took a 3-2 lead when Pedro Guerrero blasted his 32nd home run to deep left field leading off the sixth before a crowd of 49,634.

Both teams scored in the seventh. Chili Davis doubled and Joe Morgan socked a triple to right to make it 3-3, and Russell drove in Derrel Thomas with his third hit and RBI of the game, against San Francisco reliever Gary Lavelle, to put Los Angeles back in front, 4-3. In the eighth Bob Brenly reached on an error by Russell at shortstop leading off, moved to second base on a sacrifice by Johnnie LeMaster and remained there when Jim Wohlford reached on an error by Ron Cey at third base. An RBI single to center by Davis plated Brenly with the tying run and chased Valenzuela. Morgan greeted reliever Terry Forster with a go-ahead RBI single to right.

Then the Giants turned matters over to Minton, who was in the midst of a remarkable stretch during the finest season of his 16-year career. Minton set down Steve Garvey and Cey on fly outs but allowed singles to Steve Yeager and Jorge Orta, with a walk to Rick Monday in between, to load the bases. Minton recovered, inducing a groundout to second base by Ron Roenicke to preserve the lead. In the ninth Minton permitted a two-out single by Guerrero before closing out the 3-hour and 18-minute affair by getting Garvey on a fly out to left.

Andy McGaffigan earned his first major-league win by retiring the lone batter he faced — Guerrero on a groundout to first base with runners on first and second in the seventh. Valenzuela saw his record fall to 19-13 with the loss, his fourth to the Giants in 1982.

The next day, the Giants completed their first three-game sweep at Dodger Stadium since 1967 with another one-run victory, 3-2, buoyed by a two-run homer by Darrell Evans. They moved within a single game of Los Angeles, tied with Atlanta for second place.1

But San Francisco split its final six games to finish third with an 87-75 record, two games behind the Braves (89-73), who overtook the Dodgers on September 28 and won the division by one game.2 The Giants were eliminated with a 15-2 loss to the Dodgers in their next to last game of the season on October 2 at Candlestick Park, and San Francisco returned the favor on the final day with a 5-3 victory over Los Angeles (88-74). Morgan’s three-run homer against Forster in the seventh inning proved to be difference.

Minton was the winning pitcher in the finale to wrap up the season with a 10-4 record to go with his franchise-record 30 saves3 and a natty 1.83 ERA. Only Bruce Sutter of the St. Louis Cardinals and Dan Quisenberry of the Kansas City Royals compiled more saves in the major leagues in 1982 with 36 and 35, respectively. Minton topped the NL with 66 games finished, ranked second with 78 appearances, and tied for second in saves4 en route to placing sixth in balloting for the Cy Young Award and eighth in Most Valuable Player voting. He was a 1982 All-Star, working two-thirds of an inning at the midsummer classic in Montreal. In 28 appearances from July 23 to September 25, Minton pitched 43 innings and allowed merely five earned runs for a microscopic 1.05 ERA while collecting 15 saves.

“He’s been tremendous,” Giants manager Frank Robinson said in September. “I haven’t seen a better reliever in this league. Minton hasn’t had a slump. He’s been consistently tough all season.”5

Minton did allow five home runs in 1982 — but they were the first against him in more than three years. John Stearns of the New York Mets went deep against the sinkerball specialist on May 2, breaking a streak that dated to September 6, 1978. Minton’s run had lasted a whopping 269⅓ innings, setting a major-league record.6 “I don’t know how in the world I did that,” Minton said. “I hung pitches just like everybody else.”7

Minton’s transcendent season followed a second straight arbitration loss to the Giants in March. After setting the franchise record with 21 saves during the strike-shortened 1981 campaign, Minton sought $495,000, but the arbitrator ruled in favor of the Giants’ $343,000 figure.8

About the bus heist: On September 7 Minton boarded the Giants’ charter bus outside the team hotel in Atlanta early and told the driver that the rest of the team had already left for Atlanta-Fulton County Stadium. So the bus departed for the ballpark, leaving Minton’s mates to find their own mode of transportation.9 It was typical tomfoolery for the 31-year-old Minton, who repeatedly lived up to his sobriquet, “Moon Man,” with his fun-loving personality and eccentric clubhouse antics. “I do it the same as everybody else; it’s just like somebody shuffled the cards one too many times,” Minton said in July 1984. “I’m a little different. I’ll give you 110 percent on the field, but I’ve got to have some fun off the field.”10

1 The Giants went 20-7 during September. Ten of their wins were by one run, including four walk-offs.

2 The Braves defeated the Giants, 8-3, on September 28, while the Dodgers lost to the Cincinnati Reds, 4-3.

4 The Braves’ Gene Garber also had 30 saves, as did Rich “Goose” Gossage of the New York Yankees.