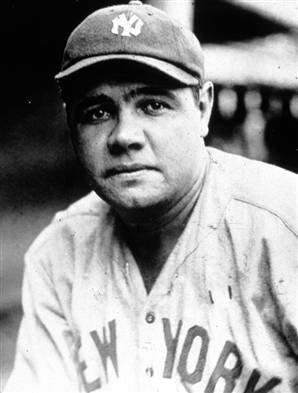 “What a happy world this would be if every one was accomplished as George Herman Ruth.” – Copeland C. Burg, September 29, 19301

On September 20, 1919, at Boston’s Fenway Park, Babe Ruth started on the mound for the Red Sox in the first game of a doubleheader against the Chicago White Sox. Staked to a 3-0 lead and aiming for his 10th win against five losses, he saw it evaporate; he left the mound with one out in the sixth and the game tied, 3-3. Ruth stayed in the game in left field, his regular position in 1919 when he wasn’t pitching. In the ninth inning, he broke the tie with his 27th home run of the season, giving the Red Sox a 4-3 walk-off win.

During the offseason, Ruth was sold to the Yankees. For the most part, he refrained from pitching during the balance of his career.

On September 28, 1930, for the first time in more than 11 years, Ruth once again stood on a mound in Boston, but this time it was at Braves Field, where he had had pitched the Red Sox to victory in Game Two of the 1916 World Series.2 He had not pitched at all since he made token mound appearances with the Yankees in 1920 and 1921.

It was the season finale, and it was a day on which the Yankees lineup saw some other changes. Catcher Bill Dickey, second baseman Tony Lazzeri, and center fielder Earle Combs had the day off. First baseman Lou Gehrig was dispatched to left field (somebody had to take Ruth’s place), and Harry Rice took over at first base. The Yankees won the game easily, scoring nine runs on 16 hits. Although Ruth allowed 11 hits, only three Red Sox runners scored.

The end of the 1930 season proved to be an anticlimax with the team still recovering from the death of former manager Miller Huggins. Huggins had left the team toward the end of the prior season and died three days before this game.

Ruth, as always, was the main attraction. A crowd of 12,000 looked on at Braves Field, hoping to see the Babe hit his 50th homer of the season. Instead they got to see his 93rd career mound victory. According to the Boston Herald, it had been announced before the game that Ruth would “pitch a few innings,” but the announcement of his being the starting pitcher came as somewhat of a shock to many of those in the stands. Ruth fielded his position well; he had four assists and initiated double plays in the second and third innings. Wrote the Herald, “in the second, with Jack] Rothrock on, Babe grabbed a shot from Bobby] Reeves, and killed off Jack at second before the latter had moved 10 yards from first.”6

New York had taken the early lead with a run in the second inning off Boston’s starter, Hod Lisenbee. Gehrig led off with a bunt single down the third-base line and scored on a double by center fielder Dusty Cooke, who was playing place of Combs. Ruth, in his second at-bat, had an infield hit in the third inning that scored Yats Wuestling, who had singled for the first of his three hits in the game, to put New York ahead 2-0.

The only homer of the game came in the Yankees’ half of the fourth inning. After Cooke had tripled leading off the inning, Harry Rice executed a perfect suicide squeeze, scoring Cooke and getting credit for a single. Ben Chapman then hit his 10th homer of the season to give New York a 5-0 lead.

Two innings later, New York added another pair of runs. Cooke singled, Rice tripled, and Wuestling singled Rice home. Boston’s Lisenbee had been removed after the fourth inning and replaced by Jack Russell, who pitched the last five innings for the Red Sox.

Ruth cruised through the early part of the game. He allowed an infield hit to Rothrock and a bloop single by Lisenbee in the first five innings. Nobody reached second until the sixth inning, by which point the Yankees had their 7-0 lead. Ruth did not allow an earned run until the eighth inning. In the sixth, with two outs, the Red Sox’ Russ Scarritt singled, took second on a passed ball by Yankee catcher Benny Bengough and scored an unearned run on a single by Bill Regan. Regan’s single was a fly ball to left-center field that could have been handled easily by either Gehrig or Cooke.

In the eighth inning, Boston scored its first earned run when Tom Oliver lined a double to center field and Scarritt singled him home.

The Yankees scored a pair of runs in the ninth inning to restore their seven-run lead. Wuestling led off with an infield hit and, with two out, Ruth singled. A single by Gehrig brought Wuestling home and a single by Cooke scored the Babe.

Ruth was clearly letting up toward the end of the game, and the Red Sox showed more signs of life in the ninth inning. Rabbit Warstler led off with a triple and came home on a single by Johnnie Heving. Ruth then regained his concentration, retiring three of the next four batters, striking out Regan for the final out of the game.

Although Ruth had a pair of hits and an RBI in the game, the hitting star was center fielder Cooke with two singles, a double, and a triple. He scored a pair of runs and had two RBIs.

Gehrig, batting in his customary fourth position in the order, behind Ruth, went 3-for-5 with one RBI. It was reported in newspapers across the country that he had raised his batting average to .382, beating Al Simmons for the American League batting title.7 On September 30 it was determined that his average was .379, and that he had finished second to Simmons’s .381.8 But Gehrig did lead the league with 173 RBIs, equaling the league record that he had set in 1927. The next season he drove in 185 runs, setting a league record that still existed as of 2020. It was the fifth consecutive season in which he played in each of his team’s games. His consecutive-game streak stood at 886. There would be many more.

For the Yankees, who finished third with an 86-68 record, it was their 16th win in 22 games against the last-place Red Sox in 1930. The Yankees had finished first or second in each of the past four seasons and would not finish as low as third again until 1940. The Red Sox had seen little in the way of hope after selling Ruth to the Yankees. The loss was their 102nd of 1930, and their season record was below .500 for the 12th consecutive year. They posted their sixth consecutive eighth-place finish, winding up 50 games behind the pennant-winning Philadelphia Athletics.

Ruth’s home-run count for the season remained at 49. Although he lost the major-league home-run title to Hack Wilson of the Chicago Cubs, he led the American League for the fifth consecutive year. It was the 11th home-run title of his career.

Ruth would pitch once more, in 1933, again beating the Red Sox, this time at Yankee Stadium. As in 1930, it was the last game of the season. He pitched all nine innings in a 6-5 win. And in this case, he helped his cause with a fifth-inning homer, his 34th of the season and the 686th of his career.

Although Ruth’s first game back on the mound was newsworthy, it was not the only headline grabber that day. There was one other story of note.

September 28, 1930, marked the first career start for Dizzy Dean of the St. Louis Cardinals. Dean pitched a complete game, beating Pittsburgh 3-1 in 1:21. Coincidentally, many years later Dean also made a successful return to the mound after a long absence. On September 28, 1947, more than six years after his most recent major-league appearance, Dean pitched four scoreless innings for the Browns in his last big-league game.

This story was vetted by John Fredland, fact-checked by Chuck Hildebrandt, and edited by Len Levin.

In addition to Baseball-Reference.com and the sources shown in the notes, the author used:

2 Because it had more seats than Fenway Park, the Red Sox used Braves Field as their home ballpark in the 1915 and 1916 World Series.