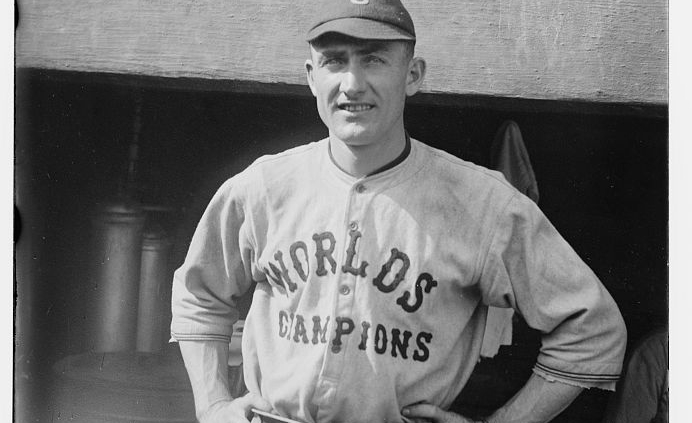 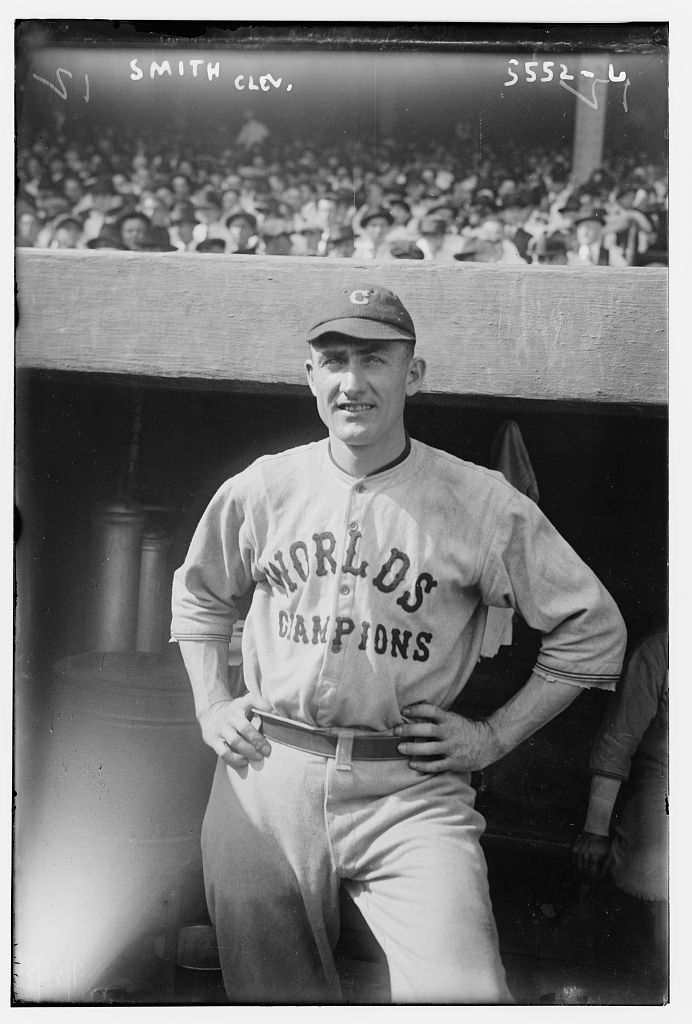 For two days in September 1921, four pitchers on two teams had no idea how to get Cleveland’s Elmer Smith out.

Over the span of three games, beginning on Sunday September 4, the 28-year-old outfielder from Milan, Ohio,1 rapped out a record seven consecutive extra-base hits — four home runs and three doubles — while the Indians battled the Yankees in the final month of a tight American League pennant race.

Smith’s hot streak began in Detroit’s Navin Field with a double in the top of the sixth inning against Hooks Dauss. Smith walked in the seventh and came up again in the eighth after Tigers player-manager Ty Cobb ordered his counterpart, Tris Speaker, intentionally walked to face Smith with two outs and two aboard.

The Indians returned home on September 5 for a Labor Day doubleheader with the St. Louis Browns at Dunn Field. The Browns, with a record of 67-63, were a third-place team in a two-team race in the American League in 1921, 14½ games behind the first-place New York Yankees with 24 games remaining. The Yankees had overtaken Cleveland for first place on September 1 during a six-game winning streak, although the Indians had won seven of their last 10 to stay 1½ games behind at 79-49. It was the first time since April that Cleveland had spent more than a single day out of first place.

The defending champs triumphed 10-5 in the opening game, as Smith homered in his first two at-bats against Urban Shocker, was intentionally walked in the fifth, and doubled off the top of the wall in center3 in the seventh to extend his consecutive hits streak to five. Smith had a busy morning4 on both offense and defense, going 3-for-3 with four runs batted in, four runs scored, and a first-inning catch against the right-field wall that was “one of the greatest catches of the season,” as well as a second-inning effort ranging “far to his right and spearing it with one hand.”5

In game two of the Labor Day doubleheader, Smith again roused the Cleveland offense with a double off St. Louis starter Ray Kolp for a 1-0 lead, scoring left fielder Charlie Jamieson, who had tripled to start the home half of the first.

Cleveland’s starting pitcher, George Uhle, surrendered the lead in the second inning on back-to-back run-scoring singles by shortstop Wally Gerber and second baseman Marty McManus. Uhle allowed single tallies in the third on a Ken Williams base hit and was chased from the game in the fourth on McManus’s second run-scoring single as St. Louis led 4-1. Guy Morton came in to relieve Uhle.

Cleveland got back on the board in the fourth when the left-handed Smith led off the inning with a deep home run over the 45-foot-high wall6 in right onto Lexington Avenue.7 It was Smith’s 15th homer of the season, a figure only five other players in the American League would top in 1921 as baseball emerged from the Deadball Era.

The Indians regained the lead in the bottom of the fifth when Speaker’s single scored catcher Steve O’Neill and a throwing error moved Speaker and Jamieson to second and third, allowing Kolp to intentionally walk the red-hot Smith to load the bases. Third baseman Larry Gardner finished the rally with a two-out, two-run single, putting Cleveland ahead 5-4.

Morton, who had also pitched six innings of relief in the morning game, held the Browns scoreless for two innings before surrendering four consecutive singles to start the seventh, tying the game, 5-5, and loading the bases. Speaker called for starting pitcher Jim Bagby, Cleveland’s ace, who had won 31 games in the championship 1920 season.

Bagby could not put out the fire, allowing consecutive singles to Williams and Baby Doll Jacobson to plate four runs and give St. Louis a 9-5 lead.

Smith came up again in the bottom of the seventh after second baseman Bill Wambsganss doubled and Speaker singled to put runners on the corners with no one out. Browns manager Lee Fohl replaced Kolp with starting pitcher Dixie Davis.

Smith’s attempt at an eighth consecutive extra-base hit was stonewalled by left fielder Williams who “robbed Smith of a triple by a sensational running catch.”8 Wamby tagged and scored on the play, crediting Smith with a sacrifice fly and his third RBI of the game.

The Cleveland rally died with the sacrifice fly and St. Louis put the game away in the eighth when Wambsganns booted a two-out grounder and Williams followed two batters later with a three-run home run off Bagby, his 21st of the year, for a 12-6 lead. Williams’s six RBIs in this game put the 31-year-old over 100 RBIs for the first time in his career.9 Cleveland scored twice more in its half of the eighth on a two-run triple by Speaker for the final 12-8 tally. Smith was walked by Davis after the triple to cap his afternoon at 2-for-2 with two walks, three RBIs, and a run scored.

The loss “passed up a splendid opportunity to gain on the lead-leading Yankees”12 and Smith returned to Earth the next day with his first nonproductive at bat in several days, popping up to the catcher in the first inning.

As for Smith’s place among Ruth and Brouthers, he did not enjoy the halo of baseball’s inexplicable golden touch for the rest of the season. Smith batted .211 (15-for-71) in the season’s remaining 21 games and didn’t homer again until the finale, as the Indians slipped to a 4½-game game deficit to the Yankees, who captured their first of their many American League pennants. Five years later, Smith’s feat was matched by Chicago White Sox first baseman Earl Sheely, who struck six doubles and a home run around a sacrifice bunt over two games in Fenway Park in May of 1926.13

In addition to the sources cited in the Notes, I consulted Baseball-Reference.com and Retrosheet.org for the box scores below, player statistics and league leaders, game logs, and team schedules.

1 https://sabr.org/bioproj/person/elmer-smith/. Milan is 50 miles west of Cleveland and 10 miles south of Sandusky, Ohio.

3 “Smith Day at Dunn Field,” Cleveland Plain Dealer, September 6, 1921: 18. The game story says the hit was two feet away from being Smith’s third home run of the game.

4 Francis J. Powers, “Indians Lose Golden Opportunity to Gain on Yanks, Dividing Holiday Bill,” Cleveland Plain Dealer, September 6, 1921: 16. Baseball-reference and Retrosheet do not include the time of game, length of game, or attendance figures but this article does mention that the first game was played in the morning. Doubleheaders in that period frequently consisted of morning and afternoon games.

6 The height of the right-field fence was raised in 1920 to 45 feet and it was just 290 feet down the foul line. https://sabr.org/bioproj/park/league-park-cleveland/.

7 “Pitchers Have Off Day,” Cleveland Plain Dealer, September 6, 1921: 18. Baseball-reference says the ball was hit to deep left field, which was 375 feet at the pole, but the contemporary newspaper account says it was hit onto Lexington Avenue, which runs behind the right-field wall.

13 Smith and Sheely’s record seven consecutive extra-base hits have gone unmatched in the major leagues as of June 2021.