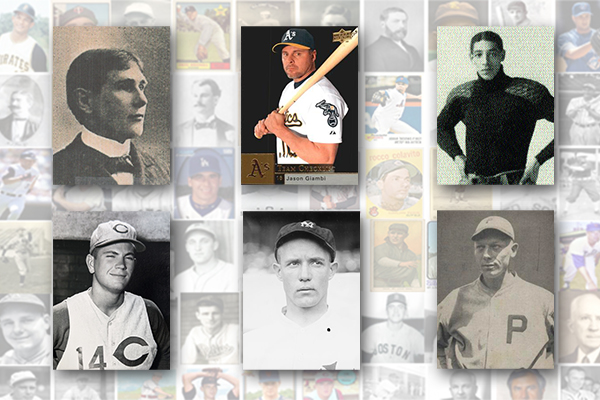 Celebrating its 20th anniversary this year, the SABR Baseball Biography Project has reached another milestone with its 6,000th published biography. SABR’s most ambitious research initiative, which began in 2002 and is now directed by Gregory H. Wolf and Rory Costello, aims to produce comprehensive, peer-reviewed profiles of every person who ever played or managed in the major leagues, as well as other subjects significant to baseball history.

More than 800 SABR members have contributed to the BioProject as writers, editors, or peer reviewers over the past two decades.

At SABR.org/BioProject, you can read about anyone in baseball from A (Henry Aaron) to Z (Bob Zuk). Some of our favorite articles produced by the BioProject are of the “cup of coffee” players whose stories are rarely told, such as Moonlight Graham, a one-time Giants outfielder whose name was immortalized in the film Field of Dreams. You can also read about Negro Leagues greats like Oscar Charleston or Josh Gibson, and stars from the All-American Girls Professional Baseball League such as Marge and Helen Callaghan.

More than 60 BioProject books have been published through the SABR Digital Library, including our most recent team book on the 1920 Chicago American Giants, the first champions of Rube Foster’s Negro National League. SABR members can download all of them for free or purchase paperback editions at SABR.org/ebooks.

You can browse all of our biographies by category, to find bios of Hall of Famers or players from a specific team. In addition, we have pages for Broadcasters, Executives, Managers, Scouts, Siblings, Umpires and a lot more on the BioProject website at SABR.org/BioProject.

The BioProject has also spawned two successful offshoots in the SABR Ballparks Project and the SABR Games Project, led by John Fredland.

It’s easy to get involved. Any SABR member is eligible to write for the BioProject, the Ballparks Project, or the Games Project. If you’d like to contribute, visit our BioProject Resources page or read the FAQs section to get started. If you’re not a SABR member, visit SABR.org/join to learn more or to sign up for an annual or monthly membership.