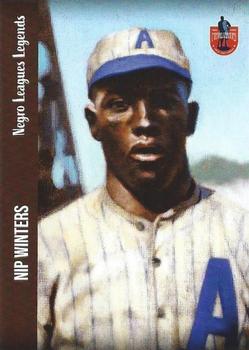 The name Jesse “Nip” Winters is unlikely to appear in a casual discussion of the greatest pitchers in the history of Negro League baseball. During his career, however, and even two decades after it ended in 1932, he was mentioned among the all-time greats. In a poll conducted by the influential Black newspaper the Pittsburgh Courier in 1952, Winters was named to the second team of the greatest Black players, just after pitchers Bullet Rogan, John Donaldson, Bill Foster, Joe Williams, and Satchel Paige of the first squad.1 Historians Layton Revel and Luis Munoz have argued that the Washington, D.C.-born hurler was “without question the best pitcher in the East” in the 1920s;2 while James A. Riley declared that Winters was the “best pitcher in the Eastern Colored League’s history.”3

Winters’ window of dominance was short-lived, much like Dizzy Dean’s in the 1930s and Sandy Koufax’s in the 1960s, which has undoubtedly contributed to his accomplishments fading from baseball’s collective memory. In a five-year period (1923-1927) with the Hilldale Daisies in the ECL, Winters posted an 84-29 slate against Black major-league clubs while leading Hilldale to the first three titles in ECL history and the Negro League World Series title in 1925. His downfall came swiftly, exacerbated by alcohol abuse.

A 6-foot-5, 225-pound southpaw,4 Winters was essentially a fastball-curveball pitcher, but struggled with control early in his career. After playing primarily with the independent Norfolk Stars in his first two professional seasons (1919-1920), Winters was acquired by Atlantic City Bacharach Giants in early 1921.

As the 1922 season progressed, Winters gradually moved from under the shadows of club ace Dick Redding, workhorse Harold Treadwell, and 49-year-old ageless wonder String Bean Williams to flash the brilliance of what would come. One of those moments came on July 26, 1922, when Winters demonstrated “marvelous hurling” and “masterful serving” (raved the Chicago Defender), to hold the Indianapolis A.B.C.s hitless.5

It had been a grueling season for Bacharach Giants and team owner John W. Connor in 1922. The previous year, Connor had learned that the Pennsylvania Railroad planned to demolish the club’s home ballpark, Inlet Park in Atlantic City, to expand its railyard.6 As Revel explained, Connor moved the team to the Bronx and renamed it the Bacharach Giants of New York, but it was essentially a traveling team the entire season. To make matters even more confusing, the original owners of the Bacharach Giants, Tom Jackson and Henry Tucker, formed a new club, the Original Bacharach Giants, which also played most of its games on the road.

One of the most competitive independent Black professional teams in the East, Connor’s Bacharach Giants had been associate members of the Negro National League since its founding in 1920. That status provided mutual protection from teams raiding rosters, as well as the right to book potentially lucrative games against NNL teams, a privilege sorely needed by Connor in 1922. Such games did not count in the official NNL standings.

Player-manager Pop Lloyd’s Giants kicked off a six-game, five-day series with the NNL A.B.C.s on July 23. The Giants batted a robust .280 as a team in 1922, led by lanky first baseman Robert Hudspeth (.320/.365/.470); their weakness was pitching, eventually leading to a losing record (30-37) against Black professional teams.

The A.B.C.s were in flux. Their influential owner and manager, who was also co-founder and vice president of the NNL, C.I. Taylor, had died in February. While his wife, Olivia, assumed ownership of the club, his brother Ben took over as player-manager.7 Led by Oscar Charleston, who slashed .374/.433/.688 and had 102 RBIs in 101 games in 1922, the A.B.C.s were challenging Rube Foster’s Chicago American Giants for first place, trailing by .006 in an exciting pennant race that also included the Detroit Stars and Kansas City Monarchs.8 “The league is going good,” opined the St. Louis Argus. “The interest has taken a sudden jump. First one club is in the lead, then the next.”9

The first game of the series-opening doubleheader in Washington Park in Indianapolis seemed to follow the expected script, with the A.B.C.s winning, 11-8, in a wild affair. Winters went the distance for Giants, surrendering 13 hits and walking five.10 The second game was called because of darkness with the A.B.C.s leading 5-1. The clubs traded victories in the next two games.11

The final two games took place in Kokomo, an industrial boomtown with a population of about 33,000, located 60 miles north of Indianapolis. On Wednesday, July 26, spectators packed the wooden grandstand at Athletic Park, a 1,200-seat ballpark that had been built in 1914 as part of the city’s Great Industrial Revolution Exposition.12 The Defender noted that it was the “biggest crowd” of the season, though no attendance figure was given.13 By the 5:40 game time, fans lined the outfield and foul lines, forcing ground rules to be in effect.14

Taking the mound on just two full days of rest, Winters shrugged off the battering he endured in Indianapolis and mowed down the dangerous A.B.C.s lineup, which batted .289 that season. (Though box scores exist, no play-by-play of the game is available.) Exhibiting his signature drop-curve and heater, Winters held the A.B.C.s hitless in an overpowering, eight-strikeout performance. He was helped by two sensational defensive plays in the middle innings, according to the Defender. Morton Clark smashed a “high-bouncing hot grounder” which seemed like a “certain safety,” opined the influential Chicago weekly, but feisty player-manager Lloyd fielded the ball at shortstop and threw to Hudspeth at first for the out. At 38 years of age, Lloyd was still at the top of his game in his 17th professional season. Second sacker Dick Jackson made an acrobatic running catch of Namon Washington’s bounder two batters later.

Winters’ no-no also had a few blemishes. He walked four batters, including Henry Blackmon in the fifth. He subsequently scored when left fielder Frank Duncan, whose professional career began in 1907, muffed a fly.15 It was the Giants’ only defensive miscue in the game.

While Winters flashed his stuff, so too did A.B.C.s starting pitcher Wayne Carr, a 25-year-old right-hander in his third seasons in the NNL. Through five innings, he surrendered just one run and began the sixth inning engaged in a 1-1 pitchers’ duel with Winters.

The bottom fell out in the sixth when the Giants bunched together four hits to score three runs.16 Two innings later, the Giants’ “heavy stick work” battered Carr, declared the Defender. Lloyd’s squad scored three more runs on five hits to take a commanding 7-1 lead.17 Carr, charged with 12 hits and seven walks, departed when Ben Taylor, who batted .373 in 1922, pinch-hit for him in the bottom of the eighth. The club’s ace, rubber-armed Jim Jeffries, who led the NNL with 21 wins and 208⅔ innings pitched in 1922, tossed a scoreless ninth, though he yielded two hits. The game lasted 1 hour and 55 minutes.

The Giants finished with 14 hits, including five for extra bases. Duncan led the hit parade with a double and triple followed by Country Brown with a double and two singles. Hudspeth and Lloyd also doubled, and the former scored a game-high two runs. According to the Defender, three of those four doubles should have been home runs, or at least triples, had spectators not lined the outfield and forced ground rules to be in play.18

Remarkably, Winters’ stretch of no-hit innings continued the next day in the Giants’ 9-6 victory to conclude the six-game series. When the A.B.C.s rallied for three runs in the eighth off Treadwell, Lloyd called on Winters to put out the fire. Winters retired all five batters he faced to save the victory.

Epilogue: Winters was credited with a 7-9 record and 5.19 ERA against Black professional teams in 1922. The next season Ed Bolden, owner of the Hilldale Daisies, signed him for the inaugural season of the Eastern Colored League, and Winters’ career took off. On September 3, 1924, Winters tossed the first no-hitter in ECL history, holding the Harrisburg Giants hitless, 2-0, in the first game of a doubleheader at West End Grounds in the Pennsylvania state capital.

In addition to the sources cited in the Notes, the author accessed Seamheads.com for all Black baseball and Negro League Baseball statistics, and SABR.org.