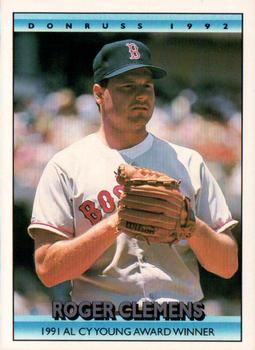 It had already been an interesting weekend of baseball in Cleveland for the visiting Boston Red Sox.

After opening the 1992 season with two weekday losses in Yankee Stadium, the Red Sox came to Cleveland to play the Indians’ home opener on Saturday afternoon, April 11, and a doubleheader on Sunday, before returning to Boston for their Monday home opener against the Baltimore Orioles.

Their weekend, and their pitching plans, went awry during Saturday’s game. In a 19-inning marathon in front of more than 65,000, the Red Sox used eight of the 11 pitchers on their roster, sparing only Frank Viola (who had pitched on Thursday), Matt Young (scheduled to pitch Sunday’s first game), and Roger Clemens (scheduled to pitch Monday’s home opener).1 Even Mike Gardiner, Boston’s scheduled starter for Sunday’s second game, took the mound for three innings of relief. He earned the win in the Red Sox’ 7-5 win, accomplished in 6 hours and 30 minutes.

Clemens, who had been back in Boston recuperating from a finger injury sustained on Opening Day in New York, saw the drama unfolding in Cleveland and phoned Red Sox leadership at Cleveland Stadium, offering his help for Sunday. They took him up on it; Clemens hopped on a plane to Cleveland for an emergency start on regular rest, even though it meant missing his chance to start the home opener on Monday.2

The Indians won the first game of Sunday’s twin bill without the benefit of a hit. Cleveland’s Carlos Baerga drove in both runs in the 2-1 victory on groundballs with runners on third, bringing home teammates who had walked against Young. Young did his part to preserve the already beleaguered Boston pitching staff, going the distance on 120 pitches while walking seven and striking out six.

Opposing Clemens on a 41-degree day at Cleveland Stadium was the newly acquired Scott Scudder, making his first start of 1992. Scudder, a 24-year-old from Paris, Texas, had been acquired from the Cincinnati Reds in the offseason, along with Jack Armstrong and career minor leaguer Joe Turek, for Indians ace Greg Swindell, before Swindell’s last season before free agency. The right-handed Scudder was 15-23 with a 4.54 ERA in his young career.

After Scudder set the Red Sox down scoreless in the top of the first, the Indians collected their first hit of the day in their half of the first on second baseman Baerga’s two-out single. He was stranded after Clemens fanned cleanup hitter Albert Belle, Clemens’ second strikeout of the inning.

The Red Sox broke the scoreless tie in the top of the fourth with singles by Phil Plantier and Ellis Burks and an RBI groundout by left fielder Herm Winningham, who was making his first start of 1992 and didn’t drive in another run until June 23.

Clemens walked Belle to lead off the fourth inning, but the Cleveland right fielder was erased on a line-drive double play off the bat of Paul Sorrento, shortstop to first base. Clemens retired the next 13 Indians after the double play.

After Belle’s fourth-inning walk, there wasn’t another baserunner until Boston first baseman Tom Brunansky reached on a throwing error by third baseman Brook Jacoby to start the top of the seventh. Brunansky was then caught trying to steal second base, but the Red Sox rallied for two more runs on a walk by Winningham, a single by Tim Naehring, an RBI single by catcher Tony Peña, and a sacrifice fly by Scott Cooper.

The 24-year-old Cooper was making his first start of the young season at third base in place of future Hall of Famer Wade Boggs, who was in his last season in Boston before going to the Yankees in a free-agent contract. Cooper started at third base the next three seasons in Boston, making two All-Star teams but falling far short of his predecessor’s 12 All-Star appearances, five batting titles and 3,010 career hits.

Clemens notched two strikeouts in the bottom of the seventh and then two more in the eighth to give him 12 in the game, which turned out to be his high-water strikeout mark for the season. It was his highest strikeout total since he fanned 13 Angels at Fenway Park in August 1989.

In their ninth, the Indians reached base for the first time since the fourth inning with a leadoff walk by speedster Alex Cole in the bottom of the ninth. Cole, who had dazzled in a 1990 debut that included 40 stolen bases in just 63 games, would not attempt a steal in this game; Hill’s double-play grounder erased him from the bases and left Cleveland down to its final out. Baerga ended the game on a first-pitch fly out to left field.

The 3-0 win wrapped up a remarkable pitching day by Boston’s Young and Clemens. Their two total hits allowed set a mark for fewest hits allowed by a team in a doubleheader.4 Equally remarkable, of course, was the fact that the Indians had won the game in which they did not have a single hit.

Clemens’ final line of nine innings, two hits, three walks, and 12 strikeouts resulted in what turned out to be his highest game score of the season.5 He matched his 1991 win total of 18 and led the American League in ERA in 1992 for his fourth and final time in a Red Sox uniform. He accumulated 202 more wins after the 1992 season for the Red Sox, Blue Jays, Yankees, and Astros. Clemens retired after the 2007 season and his 354 career wins are easily the highest of any pitcher not in the Hall of Fame,6 though his exclusion owes far more to his role in the performance-enhancing-drug scandals than for his own statistical accomplishments.7

The Red Sox headed to Boston for their home opener against the Baltimore Orioles, which would now be started by the newly acquired Frank Viola. Tony Fossas was the losing pitcher. They had a disappointing 1992 campaign, finishing in last place in the AL East at 73-89 while finishing next to last in the American League in runs scored, batting average, and OPS.

The Indians finished 76-86 in 1992, a 19-game improvement over their 1991 record as the franchise began to climb out of a long stay in the basement of the American League. Their early hitting woes did not haunt them throughout the season; they finished third in the league with a .266 team batting average and saw several players emerge who would play large roles in the franchise’s mid-’90s renaissance, particularly Belle, Baerga, Lofton, Alomar, Sorrento, and starting pitcher Charles Nagy.

In addition to the sources cited in the Notes, the author consulted Baseball-Reference.com and Retrosheet.com.

2 “The Cavalry Arrives in Clemens.”

5 The game score metric, as created by pioneering baseball analyst Bill James, attempts to assign a number between zero and 100 to quantify the overall effectiveness of a starting pitcher’s success in a particular game, with 100 being the highest possible score. Clemens’ game score of 92 was his best since almost precisely one year earlier on April 13, 1991 when he pitched a complete-game shutout with three hits allowed, no walks, and 11 strikeouts against the Indians at Fenway Park.

7 Clemens’ alleged use of performance-enhancing drugs is largely considered to be the reason why he and several contemporaries (e.g. Barry Bonds, Mark McGwire, and Rafael Palmeiro) who had unusual and enormous accomplishments in the second half of their careers were denied election to the Hall of Fame despite statistics that would otherwise make them a lock.