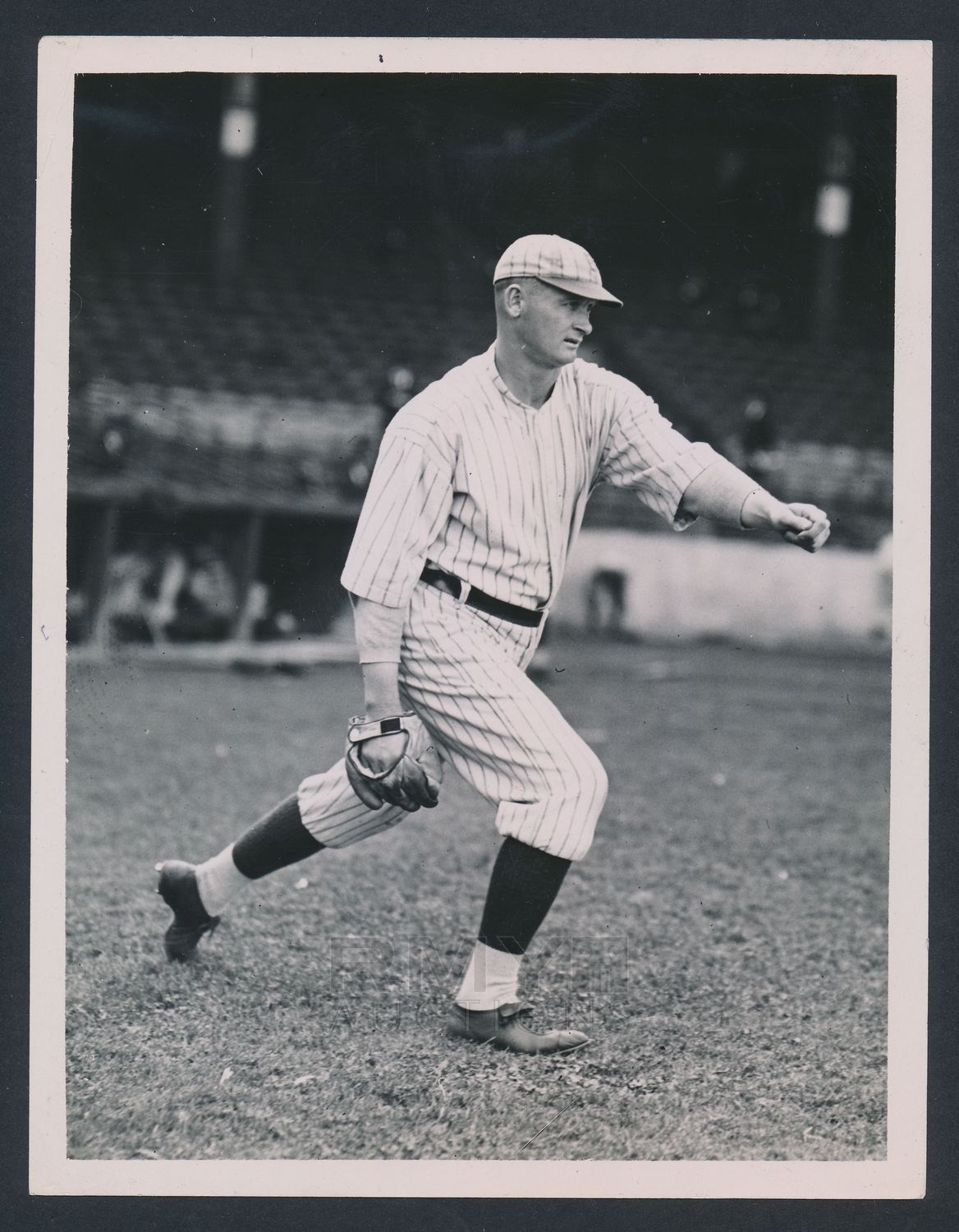 No matter how bright or bleak the prospects for the coming season, on Opening Day every baseball team has its share of hopeful anticipation. Since they were the defending National League champions, this was especially true for the Brooklyn Dodgers on April 13, 1921, when they opened the season in Boston.

For once the New England weather also cooperated, with the kind of day “one would expect in mid-June.”1 The combination of nice weather and Opening Day excitement attracted so many fans that the railway cars taking them to Braves Field were “absolutely swamped.”2 Crowd estimates ranged from 11,000 to 20,000, which Burt Whitman, writing in the Boston Herald, thought was likely the largest Opening Day attendance “in recent years, if not in all time.”3

While they waited for the first pitch, the fans were entertained by the 101st Regiment band, which “played their heads off,” including a rendition of “Tessie,” the theme song of past Boston champion clubs.4 Also on hand was Massachusetts Governor Channing Cox, to throw out the ceremonial first pitch.5

Dodgers manager Wilbert Robinson probably wished his ace Burleigh Grimes was available, but the spitballer’s long holdout kept him on the sidelines. Instead, Robinson chose Leon Cadore, who was unlikely to be overawed by the occasion since he was starting his third consecutive opener. Boston manager Fred Mitchell’s thinking was unknown, but he must have been aware that choosing Joe Oeschger set up a rematch of the epic 26-inning battle of the previous season. Neither pitcher seemed to have suffered any lasting ill effects from that experience, since both won 15 games in 1920. Any fans attending the 1921 opener who had also been present on that cold May day a year earlier, had to be grateful that if extra innings were again on the agenda, the weather was far more congenial. Such concerns didn’t seem at all far-fetched when “the scoreboard started off like an Easter parade – nothing but goose eggs” for the first 4½ innings.6

Boston had threatened in the bottom of the fourth when Walton Cruise’s single got past Dodgers right fielder Tommy Griffith, but center fielder Hi Myers backed up the play, forcing Cruise to stop at third, where he was stranded.7 After the Dodgers went out scoreless in the top of the fifth, the Braves broke the ice in the bottom of the inning. With one out Horace Ford, whom the Brooklyn Daily Eagle cruelly and unwisely dismissed as “a feeble brother with the bat,” “doubled mightily to left centre field.”8 Ford moved to third on a groundout, bringing up pitcher Oeschger, whom the Eagle probably also didn’t consider much of a threat. Any such suppositions proved incorrect, however, when Oeschger hit “a simple little thing” to Ivy Olson. While attempting to field the ball, the Dodgers shortstop “came down kerplump as if he had stepped on a banana peel on an icy pavement” and was unable to make a play.9 It was, the Eagle said grudgingly, a “technical but unmerited hit.” But unworthy or not, Boston led 1-0.10

The Braves still held their slim lead when they came to bat in the bottom of the seventh. Tony Boeckel led off with a single and advanced to second on Walter Holke’s sacrifice as the Braves tried to build an insurance run. Perhaps tiring, Cadore walked Ford, bringing up Mickey O’Neil. According to Whitman, the Boston catcher held “his bat on high, according to his new habit” and blasted a 1-and-1 pitch over Dodger center fielder Myers’ head for “an honest [three-run] home run.”11 With Brooklyn now behind 4-0 to a pitcher who dominated them a season ago, the four-run deficit must have seemed insurmountable to any faint hearts on the Dodgers bench. In the eighth, however, Oeschger, who had been pitching with the “speed of a comet,” seemed to tire.12 Either that or the Dodgers batters finally figured him out: Three straight singles loaded the bases with none out. The third hit was a single to center by Jimmy Johnston that Whitman partially attributed to Ray Powell’s playing very deep.13 If it was an error in judgment, it was not the last such mental miscue the Braves defense would make that day.

Next up for Brooklyn was Griffith, who hit a groundball to second that according to the Standard Union (Brooklyn) “looked to be a double play” ball. It took a bad hop, however, and Ford had to settle for the out at first while Bernie Neis scored the Dodgers’ first run.14 Brooklyn’s best hitter, Zack Wheat, was next and he doubled to center, driving in both runners, cutting the Boston lead to a single run. There was still only one out with the tying run on second, but Oeschger recovered to strike out Myers and retire Ed Konetchy on a fly ball. Neis had batted for Cadore so Al Mamaux took over the pitching duties for Brooklyn in the bottom of the eighth. Although the Braves got a runner to third with two out, he was left there and Boston led 4-3 as the game went to the ninth.

Brooklyn’s last chance didn’t start well when Pete Kilduff hit a foul fly toward the stands on the first-base side. First baseman Holke and catcher O’Neil “raced for the ball, right up to the jaws of the Dodgers’ dug-out,” where Holke made a “great catch,” despite being “buffeted” by O’Neil.15 Boston was not so fortunate on the next play, however. Brooklyn catcher Ernie Krueger lifted a fly ball down in the left-field line with shortstop Walter Barbare and left fielder Cruise in pursuit. According to the Eagle, the two “bowed to each other and [then] stepped back and saw the ball fall safely.”16 Opinions differed as to which Brave was at fault. The Brooklyn Citizen nominated Barbare while Whitman thought Cruise should have taken it.17 No one, however, could disagree with Whitman’s assessment that “it was one of those plays which breaks a manager’s heart” and also “makes fans furious.”18 The Citizen also thought the play had “unnerved” Oeschger, since he promptly hit pinch-hitter Wally Hood with a pitch.19

Brooklyn now had the tying run (Jack Sheehan running for Krueger) on second, Hood, the go-ahead run on first, and only one out. The stage was set for a hero, and shortstop Ivy Olson promptly filled the bill by belting “a prodigious single” to left that scored Sheehan easily.20 The ball got past Cruise, rolling just far enough to offer an opportunity to Tom McCarthy, Brooklyn’s new third-base coach, a favorite in Boston thanks to his time on the great Beaneater clubs of the 1890s. McCarthy “decided it was a good time to gamble” and sent Hood, who “never slacked tack or hauled sheet[,]” to score the go-ahead run.21 Both the Herald and the Boston Globe criticized left fielder Cruise, who not only misplayed the hit, but also made a poor decision by throwing to second instead of trying to get Hood at home.22

Oeschger recovered to get the remaining two outs without further damage, but it was too little, too late. Sherry Smith came on in relief for Brooklyn and although he allowed a two-out hit, the Dodgers left-hander closed out the come-from-behind win. Whitman called it “a cruel climax” to a game where “for seven innings the Braves looked like the champions of this and every other world” before “something went blooie with liaison between their infield and outfield.”23 While James O’Leary in the Boston Globe believed Brooklyn “had some luck” in the ninth, he manfully acknowledged, “[T]hat is all in the game.”24

Naturally the Brooklyn papers felt the dramatic win demonstrated that the Dodgers were well positioned to defend their National League title. The Standard Union declared that the team’s “ability to bunch their hits” was the deciding factor – “the same ability that won” the 1920 pennant.25 Taking a slightly different perspective, the Brooklyn Daily Times emphasized the intangible but no less important “courageous qualities” that had also sustained the Dodgers a year ago.26 It was just one game, but few could quarrel with the Eagle’s sentiment that “it was an auspicious beginning for the new campaign.”27