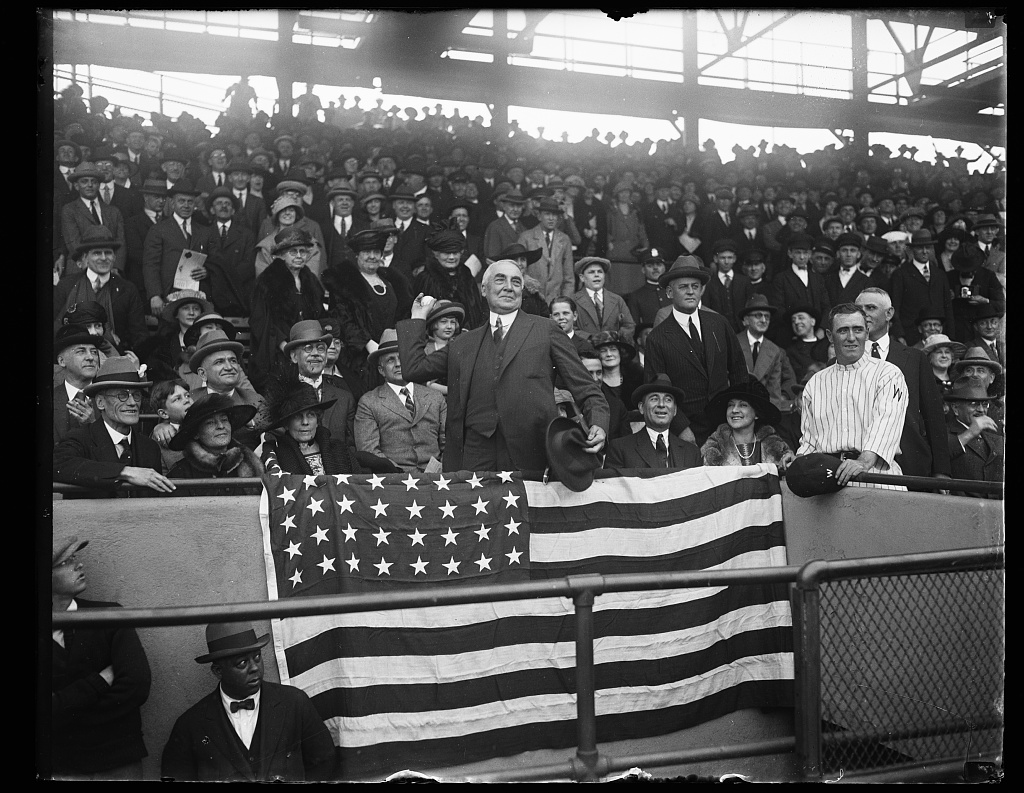 In 1910 President William Howard Taft had begun a long-standing tradition of the president of the United States throwing out the ceremonial first pitch on Opening Day.1 In 1921 Warren G. Harding — a Cincinnati Reds fan — was president and he threw out the first pitch of the American League season at Washington’s Griffith Stadium on April 13.2 Harding rooted for the locals. General John J. Pershing raised the American flag.

Seated in the box next to the Hardings were Vice President Calvin Coolidge and his wife. League President Ban Johnson was in box behind the president’s. Several members of the Cabinet and members of Congress were also present at the game.

Both teams were managed by new men, the Red Sox by Hugh Duffy, the Senators by George McBride. Neither team had done that well in 1920 — Boston finished fifth and Washington Finished sixth.

The ceremonial first pitch was caught by Washington starter Walter Johnson. After 10 seasons in which he had won 20 or more games, Johnson had borne a disappointing season with only 21 appearances in 1920 due to illness and physical infirmities.

His first pitch of the game was a called strike right down the middle. The batter, Boston third baseman Ossie Vitt, struck the second pitch for a triple to left-center. Next up was second baseman Eddie Foster; he hit a fly ball to Duffy Lewis in left field and Vitt tagged up and scored. A strikeout and a groundout ended the Boston half of the inning.

The Senators evened the score in the bottom of the first, getting one run off Red Sox starter Sad Sam Jones with a single by leadoff batter Joe Judge, who advanced to second base on an infield out by Clyde Milan, and scored on a hit-and-run when center fielder Sam Rice hit the ball sharply to center.

He had a shaky start in this game, though, giving up two more runs (and the lead) in the bottom of the second inning. The Red Sox had added another, going up 2-1 in the top of the second on a single by Stuffy McInnis past second baseman Bucky Harris. Collins sacrificed him to second base and he scored on a single to left by catcher Muddy Ruel. Jones singled, too, but both he and Ruel were left stranded.

The Nationals then went up for a 3-2 lead on a triple to right field by Howie Shanks, another ball that center fielder Shano Collins fumbled, and a Texas Leaguer by Val Picinich.

Neither team scored in the third, but the Red Sox returned to the fore in the top of the fourth, scoring two runs and making it 4-3. With one out, Everett Scott and Ruel singled and were both driven in by Sam Jones, who drove the ball for a triple.3

Johnson was relieved by Eric Erikson, who pitched the fifth, sixth, and seventh.

Jones meanwhile had settled down and didn’t give up a hit after the fifth inning.

Boston added an insurance run in the top of the seventh. Sam Jones singled to lead off, his third hit of the game. Vitt sacrificed him to second. Foster made an out, but left fielder Mike Menosky drove a ball to center field that Sam Rice mishandled, allowing Jones to score.

In the eighth, facing the Senators’ third pitcher, Tom Zachary, Collins hit a two-out triple and was sent home by Scott, who whacked a ball hard, right by Zachary’s head and up the middle.4 The score stood at 6-3 and remained so through the end of the game.

Both Vitt’s triple in the first inning and Collins’s in the eighth were hit “into the field seats,” indicating that the overflow crowd had apparently prompted a ground rule that awarded three bases to a ball hit into seats in front of the fence.5

Jones pitched a complete game and got the win. He was headed for a 23-win season, one of the two best of his career.6 He’d given up nine hits and walked one batter. The Red Sox had collected 15 hits, nine off Johnson. The Washington Post noted — regarding Johnson, Erickson, and Zachary — “Of the trio there was a glaring lack of anything that resembled half-way early season form.”7

Attendance was 18,212. President Harding and party stayed through the full nine innings. The time of game was an even two hours.

Walter Johnson finished the season 17-14 (3.51). The Senators improved in the standings to a fourth-place finish in 1921 but were still 18 games behind the New York Yankees. The Red Sox finished fifth again, with a 75-79 losing record, 23½ games behind the Yankees.

1 Only Presidents Jimmy Carter and Donald Trump eschewed the tradition. For a history of baseball and the White House, see Curt Smith, The Presidents and the Pastime (Lincoln: University of Nebraska Press, 2018), with Taft’s first pitch highlighted on pages 22-23.

2 “President Harding learned early in life to root for the Cincinnati Reds, and he has never shifted his affections.” See “President Tossed First Ball and Kept Box Score of Game,” Boston Globe, April 14, 1921: 3.

3 The Globe account said that Jones hit it between Lewis and Rice (in other words, to left-center), but the Washington Post said he tripled to right field. Wherever it went, it was a three-base hit.