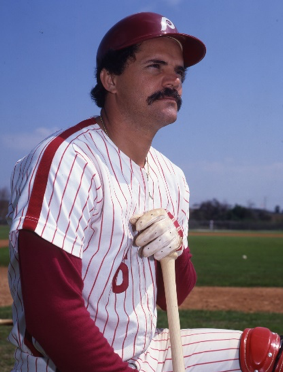 Since 1881, 30 major-league players have hit an ultimate grand slam.1 This rare feat happens when a player hits a bases-loaded walk-off home run with his team down by three runs in its final at-bat. In essence, it gives the home team a one-run margin of victory. The list of ultimate grand slam hitters includes Babe Ruth and Roberto Clemente, with the most recent one (as of 2020) being hit by David Bote for the Chicago Cubs in 2018.

The Philadelphia Phillies wrapped up the 1982 season with an 89-73 record and a second-place finish in the National League East, three games behind the St. Louis Cardinals. October 1983 would see them take on the Baltimore Orioles in the World Series, and in mid-April the promising new season stretched before them. April 13 marked the team’s seventh game and their first game at home. The Phillies were 3-3 going into the game against the New York Mets, who had handed them back-to-back losses in the first two games of the season.

Pat Corrales, the Phillies’ manager, was beginning his second year with the team,2 as was catcher Bo Díaz. Díaz, a 1981 All-Star for Cleveland, hit a solid .288-18-85 in 144 games in 1982. After his backup role for the Indians, he was happy to be in Philadelphia, where he was the starting catcher.

The Philadelphia evening was cloudy and cool,3 and the game got underway with a leadoff single by Mets center fielder Mookie Wilson. In the bottom of the second, Díaz singled home the first run of the night, third baseman Mike Schmidt, who had walked and stolen second.

The Mets evened things up in the top of the third with a double by first baseman Dave Kingman that brought home Wilson, who had reached on his second single of the night. The Phillies countered in the bottom of the inning with three runs on four hits, including a double by right fielder4 Pete Rose (his 700th5), and a home run to deep left by Schmidt that scored Rose.

The Mets, however, were not going gentle into that good night, largely because Phillies pitching was not presenting many obstacles for them. Starter Dick Ruthven and relievers Ed Farmer and Sid Monge combined to allow 16 hits as the runs piled up. Three runs came in the fourth, one of them a home run by right fielder Danny Heep, before Farmer replaced Ruthven. The fifth inning brought two wild pitches, two intentional walks, two more hits, and two runs driven in by second baseman Brian Giles. By the seventh inning, Monge was in for Farmer, and Heep, who had walked, scored again, this time on a single by third baseman Hubie Brooks. In the eighth inning, shortstop Bob Bailor led off with a home run to deep left, which was immediately followed by another shot to left from Kingman.

The Phillies, not exactly counterattacking, had eked out one more run, in the seventh, but it was a significant one. Rose, who had doubled again in his fourth at-bat, scored on an error by Wilson, his second error of the night. Frustrating, undoubtedly, for Wilson, but it was memorable for Rose. It was his 2,000th major-league run.

But one run, no matter how historically significant, won’t win a game in which you are losing by four heading to the bottom of the ninth. With the Phillies down to their last three outs, Rose flied out to left to begin the inning, left fielder Gary Matthews and second baseman Joe Morgan walked, and Schmidt also flied out to left.

And now, with two on and two out, the game was about to resemble musical chairs.

Len Matuszek came in to pinch-hit for pitcher Porfi Altamirano and drew yet another walk to load the bases. Three walks apparently were the limit for Mets manager George Bamberger, who yanked right-handed reliever Rick Ownbey and replaced him with lefty Jesse Orosco. While Orosco warmed up, Von Hayes, 0-for-3 so far with a walk, left the on-deck circle and returned to the dugout to change his bat for the one he used against left-handers. But the bat change wasn’t needed; Corrales changed batters instead, replacing Hayes with righty pinch-hitter Bill Robinson. (This move caused an uproar in the press box. Ted Silary of the Philadelphia Daily News wrote that the cry went up almost in unison: “How can he pinch-hit for a guy the organization traded five players6 to get?”7)

But Corrales had his reason. Hayes had come to the Phillies from Cleveland in a December 1982 trade. He was new to National League pitching and wasn’t familiar with Orosco, who was potent against lefties, holding them to a .177 average the previous season.8

Robinson drew a walk, scoring Matthews, and was quickly replaced by pinch-runner Bob Dernier (26 years old to Robinson’s 39). Just as quickly, the agitated Bamberger headed to the mound to replace Orosco with ace Neil Allen.

“Don’t try and hit it out of the ballpark,” Corrales told Díaz as Allen warmed up. “Dernier is on first, and he can score on a double.” Díaz nodded, “OK.”9

Allen threw two straight fastballs, then an “exploding” curve that was outside the strike zone, bringing the count to two balls and one strike. And then — another fastball, high in the strike zone. This was the pitch Díaz had been looking for, and he did not squander his opportunity. He launched the ball into deep left field, stood long enough to see it clear the 371-foot wall, and began a jubilant trip around the bases. As Richie Ashburn wrote the next day, “With one mighty swing of the bat, Bo Díaz turned an ugly game into a thing of beauty.”10

Peter Pascarelli described it this way: “Instead of the Phillies expiring into the cool night with a richly deserved defeat, there they danced around home plate, greeting a hero named Bo Díaz and celebrating a 10-9 victory provided by Díaz’ two-out grand-slam home run in the ninth inning.”11

Díaz, who later in his career became reluctant to speak with the press, was, understandably, downright chatty that night.

“It’s an unbelievable feeling to come back and win like this.

“I just wanted to hit the ball hard somewhere, maybe get a double that might clear the bases and tie the game. But I hit the ball good, and I knew it was gone. Boy, it was unbelievable.

“He had thrown me two straight fastballs and then threw me a curve, and the count was now 2-and-1. And I knew he had to throw me a fastball here, and I was waiting for it. It was a in a good place to hit, and I got all of it.”

And Neil Allen’s reaction? “It was a stupid, stupid pitch,” he said, in tears.

Bamberger, who’d undergone heart surgery in 1980, didn’t lay the blame solely at Allen’s feet, but he didn’t mince words about his relievers. “That was a disgrace, an absolute disgrace. [I]f this keeps up, I’m going to need another bypass.”

As for Phillies manager Corrales, “We had it all the way,” he joked.13

The home run was Díaz’s first of the season and helped net him five RBIs for the night, a record for him.14 It was his second career grand slam and the first ultimate grand slam in major-league baseball since Roger Freed hit one for St. Louis in May 1979.

In 2003 the Philadelphia Inquirer marked the beginning of the Phillies’ final season at Veterans Stadium with a piece called “Vetstory,” in which they recalled 33 of the most memorable baseball moments in the Vet’s 33-year history.15 Díaz’s game-winning home run that night made the list, proof that two decades later his grand magical moment lived on.

This is my first story for the Games Project and one I have wanted to tell since I wrote Bo Díaz’s biography for SABR’s Biography Project in 2017. I opened his bio with an abbreviated story of this grand slam but, in the interest of not focusing too heavily on any one event in his career, I couldn’t give it the attention I felt it deserved. It is my great pleasure to do that here.

In addition to the sources cited below, I consulted BaseballReference.com and Retrosheet.org for the box score and play-by-play accounts of this game.

The photo shown in this essay was purchased by the author from the Topps Vault.

1 Baseball Almanac has the most complete listing of ultimate grand slams I was able to find. It does, however, omit Steve Pearce, who had one for Toronto on July 30, 2017. https://baseball-almanac.com/feats/walk_off_grand_slams.shtml

2 At the 1983 All-Star break, the Phillies had a record of 43-42 and were in first place by .001 over the Cardinals. Surprisingly, Corrales was fired by Phillies general manager Paul Owens, who, proving that truth is stranger than fiction, replaced Corrales with himself. According to Corrales’s SABR biography, he became the first and only manager (as of 2019) to be fired while his team was in first place.

4 Rose changed positions in the eighth, moving to first base.