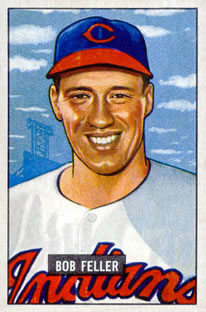 April 16 is an important date in Cleveland Indians and major-league history. On that date in 1940, Bob Feller hurled the first-ever Opening Day no-hitter.1 On a cold, raw day at Comiskey Park, Feller accomplished the rarest of feats against Chicago’s South Side club.

Feller struck out eight White Sox batters but also surrendered five walks. As in many no-hitters, the pitcher was aided by some extraordinary defensive plays. Third baseman Ken Keltner, right fielder Ben Chapman, and second baseman Ray Mack were all singled out by Feller for their work in the field. “I had some pretty fancy support out there,” said Feller. “Ben Chapman saved my bacon twice and Kenny and Ray each made a couple of swell plays. Sure, I had pretty good stuff, but I was lucky, too.”2

But Feller’s 1940 no-hitter wasn’t the only memorable April 16 of his distinguished career. Six years later, again in Chicago, Feller authored another Opening Day gem against the White Sox.

After the 1941 season, Feller enlisted in the US Navy and served in World War II. He returned to the Indians at the end of the 1945 season, making nine starts.

As the Indians opened the 1946 season, Feller was again Cleveland manager Lou Boudreau’s choice as the team’s Opening Day pitcher. Starting for the White Sox was right-handed hurler Bill Dietrich. The Philadelphia native was beginning his 14th season in the big leagues, all of them in the American League. Dietrich also had a no-hitter to his credit: against the St. Louis Brpowns on June 1, 1937, also at Comiskey Park.

Both the Indians and the White Sox finished in the second division of the AL in 1945. Cleveland (73-72-2) placed fifth, while the White Sox (71-78) were right behind them in sixth.

As in 1940, the opener in 1946 for both clubs was on April 16. The weather in Chicago was described as cold and raw when Feller pitched his gem in 1940. In 1946 it was downright freezing with a Chicago forecast calling for a high temperature of 28 degrees.

Many of the residents in Chicago may have been concerned about the meat packers’ strike that started at midnight on April 16, just hours before the opener, with 35,000 meat packers, meat cutters, and butchers walking out at the Union Stockyards. The strike, over insufficient wages in the view of the union workers, was a nationwide effort that affected more than 300,000 union members. Still, a crowd of 20,106 made their way to Comiskey Park for the matinee lid-lifter, weather and striking meat packers be damned.

At the time, it may not have occurred to anyone that the starting center fielder for the Indians was anything special. Bob Lemon, who signed with the Indians out of high school in 1938, started his pro career as a third baseman. It was determined that perhaps this was not the position for him, and he was moved to the outfield. Like Feller, Lemon also served with the Navy during World War II. Unlike Feller, he was not a star with unlimited potential playing baseball at the highest level. Lemon was a capable hitter in the minor leagues. But proving that ability against big-league pitching was a daunting task.

If the fans were hoping for a pitchers’ duel, they were in for a treat. Feller and Dietrich each dealt goose eggs to their opponents through the first five innings. Feller set down the first 11 men he faced until Taffy Wright got aboard with a single in the bottom of the fourth.

This changed in the top of the sixth inning. Dietrich walked George Case on a 3-and-2 count. Lemon’s sacrifice moved Case to second base. Hank Edwards followed with a single to right field, bringing the speedy Case home and giving the visitors a 1-0 lead.

Meanwhile, Feller was mowing down the White Sox batters. He pitched one-two-three fifth, six, and seventh innings. A strikeout of former teammate Hal Trosky to begin the eighth made it 10 straight batters retired for Feller.

Perhaps the White Sox thought that the game was getting old and they might not have a better chance to score the tying run against Feller. Kolloway was sent home on the base hit, but Case’s throw home to catcher Frankie Hayes beat Kolloway by 10 feet for the easy third out of the inning.

Feller carried the 1-0 lead to the bottom of the ninth. Dietrich was due to lead off the inning, but he remained in the dugout; Bob Kennedy grabbed a bat for pinch-hitting duties. Feller walked Kennedy, the first base on balls he allowed in the game. Right fielder Wally Moses bunted Kennedy to second; the tying run was in scoring position.

Jake Jones batted for third baseman Floyd Baker and sent a line drive to right-center field. Lemon, moving to his left, stretched out and snared the liner. He scrambled to his feet and fired to Boudreau to double up Kennedy, ending the game. “One of the greatest diving catches I ever saw,” said catcher Jim Hegan.3

Both pitchers went the distance. Feller surrendered three hits, struck out 10 and walked one. Dietrich was almost as good. He gave up six hits, struck out nine and walked three. On the offensive side, Edwards went 3-for-4 with the one important RBI.

It wouldn’t be a surprise that after being away from the game for almost four seasons, Feller may have lost some zip on his highly regarded fastball. “I’ve seen him faster, but never smarter,” said Taffy Wright. “He doesn’t put everything he’s got on his pitches anymore, but he’s mighty swift out there. He doesn’t have to strong-arm his way anymore for he knows how to really pitch now.”4

Cleveland and Chicago swapped positions in the AL standings from the previous season. The White Sox (74-80) finished in fifth place and Cleveland (68-86) ended the campaign in sixth.

For Bob Lemon, his transformation from outfielder to pitcher began later in the season. He worked mostly out of the bullpen in 1946, making five starts in 32 appearances. By 1948, he had become part of the Indians’ starting rotation and was the ace of the staff. Lemon won 20 or more games in seven seasons. He was named AL Pitcher-of- the-Year three years (1948, 1950, 1954). He was inducted into the National Baseball Hall of Fame in 1976.

In addition to the sources listed in the Notes, the author accessed Baseball-Reference.com and Retrosheet.org for box scores, play-by-play and other data.

1 For 80 years Feller’s no-hitter was hyped as the only Opening Day no-hitter in the major leagues. In December 2020, Major League Baseball, saying it was “correcting a longtime oversight in the game’s history,” recognized seven Negro Leagues as major leagues and added their records to the major-league annals. That action meant the no-hitter thrown by the Newark Eagles’ Leon Day against the Philadelphia Stars on May 5, 1946, Opening Day for the Negro National League, joined Feller’s gem as the only Opening Day no-hitters.