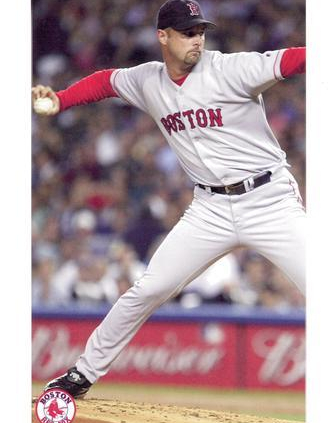 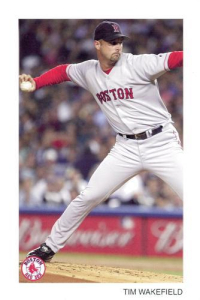 In some sense, it’s always significant news to Boston Red Sox fans when their team beats the New York Yankees. Since the 1918 Red Sox won the World Series, the Yankees had won 26 World Series as of 2004 and the Red Sox had won none.

As the 2004 season began, there had been three memorable head-to-head competitions between the two teams in final series to determine the American League pennant—1949, 1999, and 2003. At the end of another season, 1978, a one-game Yankees-Red Sox playoff decided the AL East Division title.

The Red Sox, however, had come up short every time, and baseball’s record books reflected this imbalance.

For Red Sox fans in April 2004, the loss in the seventh game of the 2003 American League Championship Series was particularly painful because Boston had a 4-0 lead after the first four innings and a 5-2 lead heading into the bottom of the eighth. The Yankees had tied the game in the eighth, then won when Tim Wakefield—pitching in relief after winning two games earlier in the series as a starter—allowed an 11th-inning leadoff home run to Aaron Boone, sending the Yankees to another World Series and the Red Sox home for the winter.1

Exactly six months after that October night, the 37-year-old Wakefield was new manager Terry Francona’s choice for starting pitcher in the first matchup of 2004 between the two rivals, a Friday night game at Fenway Park.2 The Yankees, who had opened the season with two games against the Tampa Bay Devil Rays at the Tokyo Dome in Japan, came to Boston with a 5-4 record. The Red Sox were 4-4.

The knuckleballing Wakefield had typically been a starter, six times winning 11 or more games for Boston. He had been 11-7 in 2003. This was his second start in 2004; the first had been eight days earlier in Baltimore, a no-decision in a 3-2 loss to the Orioles.

Facing the Red Sox for Joe Torre’s Yankees was right-hander Javier Vázquez. The 27-year-old right-hander had come to the Yankees in a December 2003 trade for Randy Choate, Nick Johnson, and Juan Rivera after six seasons in Montreal. He had won 10 or more games each of the four preceding years.

On a chilly night, with the game-time temperature at 41 degrees, the game was sold out, but some of the vitriol that one might have expected diehard Sox fans to shower on the Yankees was missing. As one New York Times writer put it, “The brutal heckling and taunting that have distinguished this rivalry were at a minimum.”3

Red Sox fans, though, were primed for resumption of the rivalry. The team announced that demand for tickets was at an all-time high and that they had sold 2.4 million tickets of a capacity 2.7 million even before Opening Day.4

Wakefield got outs from the first three batters he faced, and the Red Sox jumped on Vázquez right away. Leadoff batter Johnny Damon reached on an error by first baseman Jason Giambi. Third baseman Bill Mueller (the 2003 AL batting champion) homered into the Yankees bullpen in right field, and after nine pitches it was 2-0, Boston.

One out later, left fielder Manny Ramírez homered too, also to right field, though Tyler Kepner of the New York Times wrote that television replays showed the ball had “hit near the top of the five-foot wall and should not have been ruled a homer. But Gary] Sheffield, playing right, never argued.”5

The Red Sox offense kept rolling against Vázquez. Right fielder Kevin Millar singled off the left-field wall, but was forced at second base by DH Ellis Burks’ grounder to short. Mark Bellhorn, the second baseman, walked. Catcher Doug Mirabelli had become the catcher of choice whenever Wakefield pitched. Not only did it give regular catcher Jason Varitek a break, but Mirabelli had much more success handling Wakefield’s knuckleball. Mirabelli hit a ball to Yankees shortstop Derek Jeter, who misplayed the routine grounder for the Yankees’ second error of the inning, and Burks scored from second base on the misplay. It was 4-0, Red Sox.

Yankees catcher Jorge Posada hit a two-out solo home run into the center-field bleachers in the top of the second, and the Yankees were on the board, but no one else reached base in the second or the third for New York.

Jeter singled to lead off the fourth, but third baseman Álex Rodríguez struck out swinging6 and after Giambi walked, Sheffield hit into a 6-4-3 double play.

Mirabelli homered in Boston’s half of the fourth, into the Red Sox bullpen. The Red Sox lead increased to 5-1.

The only other run the Yankees scored came in the top of the fifth. With one out, left fielder Hideki Matsui singled and took second on a passed ball, a knuckler. Yankees DH Bernie WiIliams singled to right field, and Matsui scored.

They mounted a mild threat in the top of the sixth, with runners on first and second and one out, but A-Rod tried to steal third and was thrown out, and Sheffield took Wakefield’s next pitch for a called third strike.

The Red Sox restored their four-run lead in the bottom of the sixth, Mirabelli knocking in another run to help his pitcher. With one out, Burks singled off the scoreboard in left. Bellhorn followed by lining a single into right field, sending Burks to third. Mirabelli doubled into the left-field corner, driving in Burks and restoring the four-run margin, now 6-2.

Torre called on Paul Quantrill to relieve with runners on second and third. Quantrill got Pokey Reese to ground out to Jeter at short; Jeter threw out Bellhorn at home plate. Gabe White replaced Quantrill and got Damon to fly out to center field.

Wakefield walked two Yankees in the top of the seventh with one out but escaped without any damage. Boston did not score in its half of the seventh.

Scott Williamson relieved Wakefield to pitch the eighth and struggled after getting the first two outs. Manny Ramírez dropped a routine fly ball in left field and Giambi reached safely. With Sheffield at the plate, Williamson threw a wild pitch, allowing Giambi to go to second. Sheffield walked.

With Posada at the plate, Williamson threw another wild pitch and the baserunners advanced to second and third. Three of his next four pitches were balls and Posada walked to load the bases and bring up Matsui—the 2003 AL Rookie of the Year runner-up after 10 seasons with the Yomiuri Giants of Japan’s Nippon Professional Baseball—as the potential tying run.

Francona called on left-hander Alan Embree to take over from Williamson.7 Matsui had driven in 106 runs in 2003, his first season in American baseball. The lefty-swinging Matsui struck out on three pitches, waving in vain at the third one.

Bullpen control troubles continued in the bottom of the eighth. With one out, Yankee reliever Jorge De Paula gave free passes to Burks, Bellhorn, and Mirabelli, loading the bases. Torre brought in Donovan Osborne to relieve. Reese grounded into a 4-6-3 double play.

Keith Foulke, signed by the Red Sox in January 2004 as a free agent after leading the AL with 43 saves with the Oakland A’s, closed the game with a scoreless ninth. The Red Sox won the game, 6-2.

Wakefield had pitched seven innings and earned his first win of the 2004 season, walking four but allowing only four hits—all singles. His “personal catcher” Mirabelli had reached base four times, albeit once on an error, and cut down A-Rod stealing.

The Red Sox had made three errors themselves, each time putting a runner in scoring position, but the Yankees had failed to capitalize on them.8

The Red Sox had won their first game of the season against the Yankees. After winning again the following day, 5-2, they lost the Sunday game, 7-3, but then swept a three-game set in Yankee Stadium the next weekend by scores of 11-3, 3-2 (in 12 innings), and 3-0.

Wakefield was appreciative of the warm welcome he got from Red Sox fans. This was the beginning of his 10th season with the team, and fans were not going to let one unfortunate pitch to Aaron Boone mar their feelings. “The reception I got was tremendous,” he said. “They’ve opened their arms and embraced me like a second son.”9

In addition to the sources cited in the Notes, the author consulted Baseball-Reference.com, Retrosheet.org, and a two-part video of the game posted on YouTube. Thanks to SABR’s John Fredland for suggesting the importance of Doug Mirabelli in this game.

2 Red Sox manager in 2003 was Grady Little; that he had not been rehired for 2004 was announced 10 days after the final game in 2003. Francona claimed to be not that emotionally drawn into the rivalry, saying, “I still woke up and looked in the mirror and had no hair.” Bob Hohler, “Homer Improvement,” Boston Globe, April 17, 2004: E1.

3 William C. Rhoden, “Red Sox Fans Should Try a Little Love,” New York Times, April 17, 2004: D1. Rhoden advanced the argument that the Yankees would be disoriented by a lack of heckling: “They feed off the negativity.” The Boston newspapers characterized this first meeting of 2004 as one with a “playoff atmosphere.” See, for instance, Andy Nesbitt, “Mirabelli Catches Lightning in Bottle” Boston Globe, April 17, 2004: E5.

5 Tyler Kepner, “Yanks’ Vázquez Also Struggles Against Boston.” New York Times, April 17, 2004: D1. Nick Cafardo of the Boston Globe agreed that the ball had hit the padding and bounced back on to the field. Nick Cafardo, “Yankees Couldn’t Find Their Rhythm,” Boston Globe, April 17, 2004: E6. Video of the game available on YouTube is quite clear that the ball should not have been ruled a home run.

6  Rodríguez had grounded out in the first inning, the first time he batted against Boston as a member of the Yankees. Both the Red Sox and A-Rod had largely agreed to a deal in the offseason, but in the deal Rodríguez would have been taking a pay cut of several million dollars—which he was willing to do to play for the Red Sox—but the Players Association stepped in and prevented the deal. He signed instead with the Yankees, for an increase. He was 0-for-4 in this first game against Boston.

7 Dan Shaughnessy, well aware that Embree had been warmed up and could have pitched in Game Seven of the 2003 ALCS, but that Grady Little had asked Pedro Martínez to go back out on the mound, wrote that Francona was “sticking with the WWGD method. When he has to make a move, he thinks, ‘What Would Grady Do?’ then does the opposite.” Dan Shaughnessy, “Carnival Atmosphere Before the Big Show,” Boston Globe, April 17, 2004: E1.