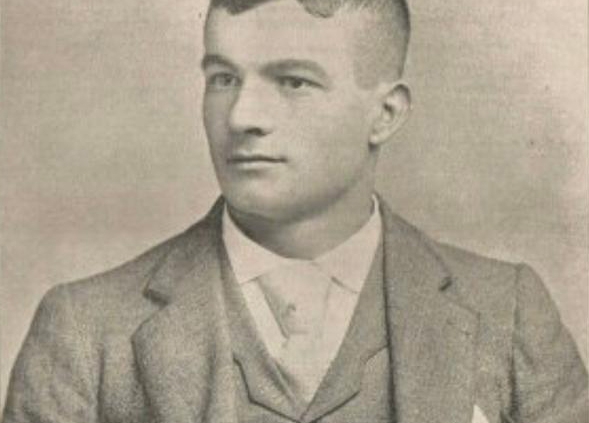 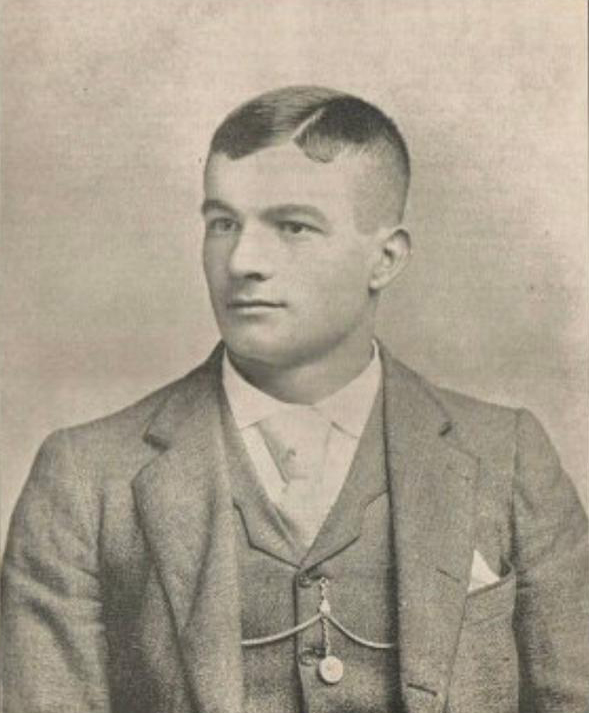 It was only their fourth game of the 1894 season, but the Brooklyn Bridegrooms were in trouble. They had lost their first three games, all against the Boston Beaneaters, by a combined score of 23-6. That caused “a decided falling off in the attendance at [Brooklyn’s] Eastern Park to witness the first game between the Brooklyn and Philadelphia teams.”1 The contest, played on April 24, turned to be a memorable day for the Phillies and their third baseman, Lafayette Napoleon “Lave” Cross.

The 1894 Phillies featured an outfield of great hitters. Ed Delahanty (left field) batted .405, Billy Hamilton (center field) hit .403 and Sam Thompson (right field) established a mark of .415. Tuck Turner was the fourth outfielder on the team, and he bested them all, batting .418 in 82 games.2 Every other starting position player ended the season batting at least .300; Cross had a season-ending batting mark of .387. As a team, Philadelphia batted .350, seven points higher than the pennant-winning Baltimore Orioles, and the Phillies had a team OPS of .893.

Kid Carsey started against Brooklyn for the Phillies, the right-hander’s second start of the young season. His first outing had resulted in a 10-2 win over the Washington Nationals. Fellow righty Brickyard “Roaring Bill” Kennedy “occupied the pitcher’s box”3 for the winless home team. This was also Kennedy’s second start; he had been badly beaten on Opening Day by the Beaneaters, 13-2.

Philadelphia batted first, and Hamilton opened the game with a single to left. The ball rolled by left fielder George Treadway, allowing Hamilton to reach second base. Kennedy then walked both Bill Hallman and Delahanty, loading the bases. After Thompson fouled out to third baseman Billy Shindle, Cross4 doubled to left field, driving in Hamilton and Hallman. Jack Clements’ single plated Delahanty and Cross, giving Philadelphia a 4-0 lead.

Brooklyn answered in the bottom half. Tom Daly cracked the first pitch from Carsey and sent it to left field for a double. He scored on Mike Griffin’s single. An out later, player-manager Dave Foutz doubled to right, and Brooklyn had two runners in scoring position.

Oyster Burns grounded to Hallman at second. Griffin momentarily stopped before running home from third. Hallman’s throw to the plate beat Griffin, who collided with the catcher Clements. After making the tag, Clements fell on top of Griffin. The Philadelphia backstop injured his knee and dislocated his arm in the collision; he was forced to leave the field.5 Cross moved from third base to catch the rest of the game, and Charlie Reilly came off the Philadelphia bench to play third.

In the second inning, Kennedy was “wilder than a poodle in August.”6 Bob Allen started things for the Phillies when he singled up the middle. Hamilton reached on a walk. With one out, Delahanty walked again, the second time his free pass loaded the bases.

Allen scored on Thompson’s fly ball, and Cross lined a single to center. Brooklyn’s Griffin fielded the ball but made a wild throw back to the infield. Hamilton and Delahanty scored for a 7-1 lead, and Cross ended up at third base. Reilly dribbled a grounder toward third base for a single, with Cross scoring on the play. Through the first two innings, the Phillies had managed eight runs on six hits, and Kennedy had allowed four bases on balls.

In the bottom of the second, Treadway launched a pitch into right-center for a solo home run, cutting Brooklyn’s deficit to 8-2. It was a “clean drive down to the carriage stand in right field and he was almost to the plate before [right fielder] Thompson got the ball.”7

Kennedy kept the Phillies from scoring in the next two innings. In the fourth, Thompson lined a ball back to Kennedy for the final out of the inning. Unfortunately, the ball had “ripped open [Kennedy’s] finger and he was forced to retire.”8

Foutz inserted rookie Jim Korwan in relief to pitch the top of the fifth. Korwan was a 20-year-old Brooklyn native, and this was his major-league debut.9 The scouting report on Korwan was that he “had lots of speed but was very wild.”10

As a result, the “nimble Quakers kept up the slaughter,”11 sending nine batters to the plate and scoring four more runs. Cross led off with a walk and advanced a base on Reilly’s sacrifice. Carsey grounded a ball to shortstop Corcoran, who threw to Foutz at first, but the ball sailed into the grandstand. Cross scored and Carsey ended up on third base.

Korwan loaded the bases by walking both Jack Boyle and Allen. Hamilton singled, moving everyone up a base as Carsey scored. Hallman hit a grounder to second but Daly threw the ball away and two more runs scored. The Phillies now led 12-2.

Cross led off the sixth with a triple to deep left field, his third hit of the day. In four plate appearances, he had a single, double, triple, and walk. Two outs later, Boyle hit a sharp grounder to Tommy Corcoran, but the Brooklyn shortstop bounced his throw in front of Foutz for yet another error, and Cross scored.

The Bridegrooms went quickly and quietly in the home half of the sixth, bringing the Phillies back to the batter’s boxes. With three balls on Hamilton, who went on to lead the league in walks with 128, Korwan missed the catcher completely, and Hamilton continued to second on the wild pitch. Hamilton then stole third, one of his league-leading 100 steals in 1894.12 Finally, Hamilton scored on a fly ball by Delahanty, one of his major-league record – still standing in 2021 – 198 runs scored that season.

Philadelphia still wasn’t done in the seventh. Thompson singled and “sprinted home on Cross’ four-baser to deep left.”13 The home run had completed the cycle for Cross, and the Phillies’ lead was 16-2.

After the inning ended, manager Arthur Irwin told Cross, “Get into your clothes and take a rest. You’ve done enough work for one day.”14 Mike Grady took over the catching duties.

Brooklyn scored twice in the bottom of the seventh on Burns’s two-out, two-run triple. According to the Brooklyn Daily Eagle, “the crowd looked for a rally, but Shindle ended matters with a slow one to Boyle”15 at first base.

The visitors continued their relentless attack in the eighth inning. Carsey walked, Boyle, Hamilton, and Hallman all singled, and then Delahanty and Thompson stroked back-to-back triples. The Phillies added two stolen bases and two sacrifices, and when the last batter of the inning had been retired, six runners had crossed home plate. Brooklyn added its final tally in the ninth, when Burns doubled with two outs and scored on Shindle’s single. The final was 22-5, or, in the words of the Philadelphia Times, “the score was something awful.”16

Brooklyn’s skipper Foutz summed up his team’s performance after the game, saying simply, “We played very poor ball today.”17 The Bridegrooms assembled 13 hits (to Philadelphia’s 15), but Foutz’s team had made seven errors, and his pitchers had allowed nine walks. Five of those were served up by Korwan, who also threw a wild pitch and hit a batter. In his debut, he had allowed 14 runs (eight earned). In the first four games of the season, Brooklyn had yielded 45 runs.

The Bridegrooms rebounded in the series’ second game, beating the Phillies 8-2. In the rubber game of the series, Philadelphia outscored Brooklyn 13-3 (the Brooklyn Daily Eagle reported that “Brooklyn was out-batted and out-fielded from start to finish”18), but the game was later declared a no-decision,19 and each team was credited with a tie. The Bridegrooms turned it around, winning 12 of 22 in May and losing only five games in June (winning 18). They finished the season in fifth place with a winning record, 2½ games behind the Phillies.

With his 4-for-4 performance (plus a walk), Cross scored five runs in the game and drove in four. (Two other runs came in on his single/error in the second.) He had his best offensive season in 1894, batting .387 with 51 extra-base hits, including a career-high seven home runs.

Cross was the first batter in 1894 to hit for the cycle, followed by Washington’s Bill Hassamaer (June 13 against the St. Louis Brown Stockings), Cross’s teammate Sam Thompson (August 17 against the Louisville Colonels), and Cincinnati’s Tom Parrott (September 28 against the New York Giants). Cross also has the distinction of being the first player to hit for the cycle in the Philadelphia Phillies’ franchise history. 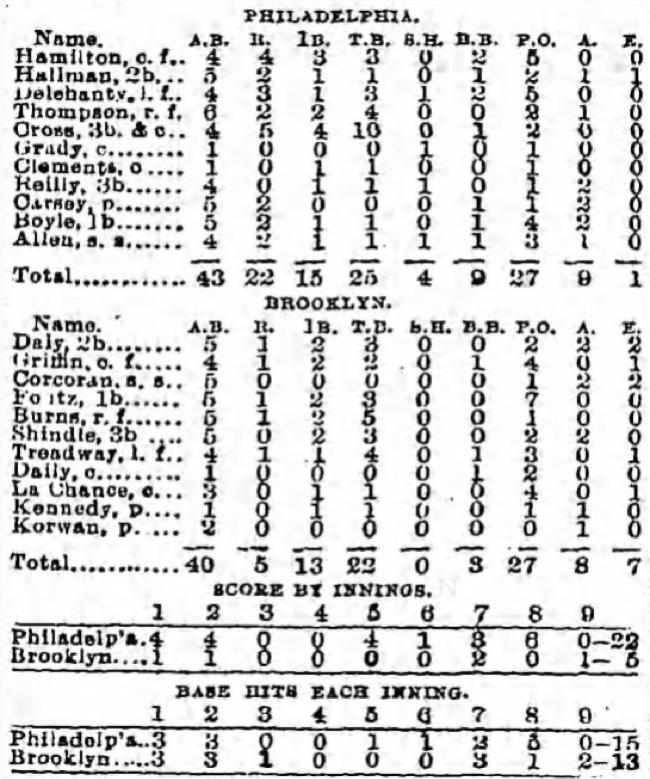 2 Boston’s Hugh Duffy led the National League at .440, but the Philly outfield quartet took the next four spots on the leaderboard.

9 This was Korwan’s only appearance in the 1894 season. Three years later (1897), he appeared in five games for the Chicago Colts, making four starts and winning one of three decisions. His career in the majors consisted of six games (four starts), with a 1-2 record and 6.92 ERA. Korwan died in Brooklyn on July 24, 1899, at the age of only 25.

19 The Philadelphia win stood in the standings for several weeks. The author could find no mention in the Brooklyn or Philadelphia newspapers explaining why the outcome was changed to a tie, even after searching the daily papers for several weeks after this game. Both Baseball-Reference and Retrosheet have inserted a note explaining that the game was called a no-decision and each team given credit for a tie.