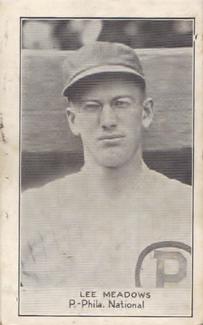 Lee Meadows spent the first 4½ seasons of his career with the St. Louis Cardinals trying to earn recognition as a pitcher, rather than for his fashion choices.

At the time, Meadows was best known for being one of the few bespectacled players in the major leagues, even drawing the nickname Specs. He showed some promise on the mound, but the losses piled up faster than the wins, so the Cardinals traded him to the Philadelphia Phillies in 1919 in a five-player midseason deal.1 In the press, the trade was reported as an even swap,2 though Meadows was regarded as the best player in the trade.3

“It is one of these trades benefiting both parties,” Cardinals manager Branch Rickey said at the time. “… Meadows will be better off for a change of scenery.”4

Philadelphia manager Gavvy Cravath made the trade as part of an effort to change the complexion of his roster, and in hopes of transforming Meadows into a winning pitcher.5 Getting meaningful offensive production from Meadows was likely an afterthought.

But on April 28, 1921, Meadows’ hitting outdid his pitching. Against the Boston Braves, Meadows “soaked the ball so hard to left that it bounded into the bleachers” for a grand slam to cap an eighth-inning rally in the Phillies’ 11-6 victory at the Baker Bowl.6 The home run was Philadelphia’s second grand slam of the game, which established a franchise record that wouldn’t be matched for more than 75 years. More importantly, it was a timely show of power that polished off one of the Phillies’ best offensive outpourings in an otherwise dismal 103-loss season.

Boston opened the scoring with four straight singles in the first inning, but the Braves’ only lead of the game was short-lived.

Philadelphia loaded the bases with two outs in the bottom of the first. With Ralph Miller at the plate, few were likely expecting what came next. He was homerless and hit a paltry .219 in 97 games as a rookie in 1920 but was off to a fast start offensively in his second season. He brought a .389 average into the game, and he sent Braves starter Jack Scott’s first pitch to him into the left-field bleachers for a grand slam.7

A single by Hod Ford and a double by Scott put Boston runners on second and third in the second, and Ray Powell’s fielder’s choice pushed across another run for the Braves, cutting the Phillies’ lead to 4-2. But from there, Meadows settled in and allowed only a pair of harmless two-out singles over the next four innings.

Cy Williams homered in the third for the Phillies.8 Williams also scored in the sixth on Russ Wrightstone’s single, which gave Philadelphia a 6-2 lead.

The Braves squandered a chance to cut into their deficit in the seventh. Boston loaded the bases with no outs when Mickey O’Neil walked, Scott singled, and Powell walked, but Meadows refused to concede a clutch hit. He got Lloyd Christenbury to fly out in foul territory and Billy Southworth to ground into a double play to end the threat — a surprising result considering that those two went a combined 7-for-12 with the bases loaded throughout the season.

After Philadelphia added another run in the bottom of the seventh when Williams singled Meadows home, the Braves finally put together a rally in the top of the eighth inning. Walton Cruise and Tony Boeckel singled to open the inning, and both advanced a base on Walter Holke’s groundout. Ford followed with a two-run single to right; he later came around to score when Scott helped himself with a single to left. That trimmed the Phillies’ lead to 7-5.

Philadelphia responded in the bottom of the frame. Wrightstone walked to lead off, and Miller followed with a double. After Cliff Lee flied out, the Braves elected to intentionally walk Frank Bruggy in order to set up a force play at any base with Meadows at the plate.

Because the game was still within reach, the Boston defense took a conservative approach against the light-hitting Meadows. The Braves moved their outfielders in, and Meadows drove the first pitch of his at-bat over Cruise’s head in left. Under a traditional defensive alignment, the ball likely would have been caught, but Cruise instead had to watch it bounce into the seats for a grand slam.9

The Braves added another run in the top of the ninth on Boeckel’s two-out RBI single — his fourth hit of the game, which matched his career high. But Meadows retired the next batter to finish off a complete-game effort that evened his season record at 2-2 and gave the Phillies a split in the series.

Meadows had a pedestrian pitching line for the afternoon (six earned runs allowed on 15 hits and three walks, and one strikeout in a complete game), but spread out the damage throughout the game. He also limited the Braves to one extra-base hit.

But his hitting was the bigger story against Boston. Meadows came into the 1921 season with a .128 average and 11 extra-base hits in 521 plate appearances over six major-league seasons. He had failed to hit a home run in his first 524 career plate appearances, but the grand slam was his second homer of that April and the second grand slam ever hit by a Phillies pitcher.10

Meadows hit a third homer later in the season to account for more than half of his career total of five.

Meadows took a regular turn in the Phillies rotation until Philadelphia traded him to the Pittsburgh Pirates in May 1923.11 There, he was a mainstay of the Pirates’ staff, winning 58 games from 1925 to 1927 as the Pirates won two NL pennants and a world championship.

In addition to the sources cited in the Notes, I used the Baseball-Reference.com, Retrosheet.org, and Stathead.com websites for statistics and team information.

2 In the trade, the Cardinals gave up Meadows and Gene Paulette in exchange for Elmer Jacobs, Frank Woodward, and Doug Baird. The swap was an easy win for the Phillies, who got 210 games and a .280 average from Paulette before he retired, and 115 starts from Meadows. Meanwhile, the Cardinals got a combined 57 appearances from Woodward and Jacobs, and lost Baird to a waiver claim by the Brooklyn Robins on August 26, 1919.

8 Williams retired in 1930 as the first player in Phillies history to hit 200 career home runs, but his team record of 217 was broken seven seasons later by Hall of Famer Chuck Klein.

9 “Phils Turn Tables on Braves, 11–6.” Prior to 1931, any batted ball that cleared the fence on one bounce was ruled a home run in the National League.

10 The first Phillies pitcher to hit a grand slam was Bill Duggleby, who did it in his first career at-bat, on April 21, 1898, against the New York Giants.

11 Meadows was traded along with Johnny Rawlings for Whitey Glazner, Cotton Tierney, and $50,000.