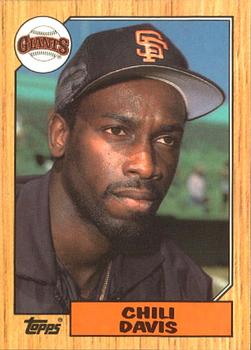 Fully bought into rallying cries like “Humm Baby” and “Don’t get your dauber down,” the 1987 San Francisco Giants picked up right where they left off the previous season, coming from behind to beat the San Diego Padres, 4-3, in 12 innings on Opening Day at Candlestick Park in San Francisco.

In 1986 — their first full season under uber-positive manager Roger Craig, creator of the catchy phrases — the Giants recorded 40 come-from-behind victories, including 24 after the sixth inning. Their 83-79 record marked a 21-game improvement from 1985, and the Giants became just the ninth major-league team to post a winning season after a 100-loss campaign.

So expectations were high for the 1987 Giants when they took the field for the Monday afternoon opener on April 6 against the Padres under a brilliant, sunny sky. San Francisco sent veteran right-hander Mike Krukow, coming off a 20-win season, to the pitcher’s mound to face San Diego righty Eric Show.

Through six innings the Padres led, 1-0, on a home run by Carmelo Martinez to deep center field leading off the second. Show, meanwhile, limited the Giants to three singles: Will Clark in the third, Jeffrey Leonard in the fourth, and Jose Uribe in the fifth.

San Diego made it 2-0 in the seventh. Garry Templeton singled leading off, stole second, and advanced to third on a sacrifice by Tony Gwynn. Martinez drove Templeton in with a single. In the eighth, Padres second baseman Joey Cora — making his major-league debut, less than two years after San Diego selected him in the first round of the June 1985 draft — singled with one out for his first big-league hit. After Cora stole second, Marvell Wynne’s two-out single to left plated him and pushed the Padres’ advantage to 3-0.

Show had retired nine straight Giants when he set down Eddie Milner leading off the eighth. But a walk to Mike Aldrete, pinch-hitting for Krukow, sparked San Francisco. Clark singled, advancing pinch-runner Chris Speier to second, and Chris Brown spoiled the shutout with a check-swing double to right that scored Speier and sent Clark to third. Lance McCullers replaced Show and got Leonard to pop out to second for the second out.

But Candy Maldonado picked up Leonard with an opposite-field double just inside the right-field line, tying the game as Clark and Brown raced home.

“Looking around the dugout today, it was like we never left,” said Krukow, who allowed seven hits (six of them singles) over eight innings and walked none while striking out three. “Same attitude, same enthusiasm as last year. We just don’t think we can be held down, no matter how many runs we’re behind.”1

Scott Garrelts replaced Krukow in the ninth and worked two scoreless innings, scattering three hits and a walk. The Giants had a golden opportunity to win the game in the 10th when Clark led off with a triple to center against Craig Lefferts. Larry Bowa, managing his first major-league game just 18 months after his final game as a player, ordered intentional walks to Brown and Leonard. Pinch-hitter Joel Youngblood hit a groundball back to Lefferts, who erased Clark on a force out at home. Then Youngblood was doubled off first on Chili Davis’s lineout to third.

In the 11th Jeff Robinson retired the Padres in order, and the Giants had another chance to decide matters as Robby Thompson was hit by a Lefferts pitch with one out and stole second with two outs — but Speier grounded out to second. Cora managed a one-out single off Robinson in the 12th, but Bob Brenly threw him out trying to steal second.

Dave Dravecky took over for the Padres in the bottom of the inning and promptly disposed of Clark and Brown. But Leonard and pinch-hitter Bob Melvin followed with two-out singles. Davis’s flare to right scored Leonard with the winning run.

“It was wonderful that Chili gave us the winning hit,” Craig said. “His previous time up [in the 10th], he’d unluckily lined into a double play that ended a no-out, bases-loaded inning. How ironic — and exciting — that we scored in the 12th after the first two batters went down. This gang doesn’t give up. It keeps battling.”2

Clark collected three of the Giants’ 10 hits to ignite a banner season in which he batted .308 with a career-high 35 home runs and 91 RBIs. He finished fifth in National League Most Valuable Player balloting. San Francisco was merely 3-for-14 with runners in scoring position and stranded 11 baserunners. Cora, Martinez, and Kevin Mitchell each had two hits for the Padres, who were 2-for-7 with runners in scoring position and left six men on base.

The Giants swept the season-opening three-game series with two more one-run victories, 4-3 and 2-1, to start with a 3-0 record for the first time since 1979. They won their first 10 one-run decisions, finishing 29-23 in such games, and amassed 34 come-from-behind victories.

“It’s a great feeling for me to see where we’ve come from,” Davis said in April. “That is to say we had a good club last year, and we didn’t tear it down like in the past. We didn’t come to camp seeing a Joe Morgan or a Reggie Smith gone, or a Jack Clark traded away. We came back with the same guys who got us there last year.”3

On July 4 the Giants lost to the Chicago Cubs, 5-3, to fall below .500 at 39-40 and a season-high 5½ games out of first place. The next day, Giants President and general manager Al Rosen pulled off the first of three momentous trades that bolstered the roster, landing Dravecky, Lefferts, and Mitchell from the Padres in exchange for Brown, Mark Davis, Mark Grant, and Keith Comstock. Rosen subsequently acquired pitchers Don Robinson and Rick Reuschel from the Pittsburgh Pirates on July 31 and August 21, respectively.4

San Francisco went 37-17 over the final third of the season (August 7-October 4) — moving into first place to stay on August 15 — to capture the NL West Division title for the first time since 1971 with a 90-72 record, topping the Cincinnati Reds by six games. The Giants boasted the best ERA in the major leagues at 3.68 and blasted 205 home runs, the most by the franchise since it moved from New York.5 They drew 1.9 million fans, the largest season total since they arrived in San Francisco. The Padres finished last in the NL West, 25 games out at 65-97. San Francisco lost a heartbreaking seven-game NLCS to the St. Louis Cardinals.

In addition to the sources cited in the Notes, the author used the Baseball-Reference.com and Retrosheet.org websites for player, team, and season information, as well as the box scores for this game:

6 Rosen was named Executive of the Year by The Sporting News, United Press International, and Baseball America.