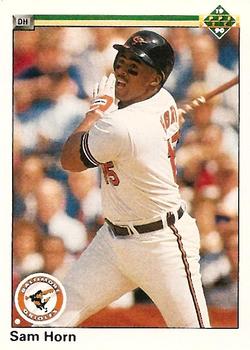 Late in the 1987 season, Sam Horn took Boston by storm. After hitting .321 with 30 home runs and 84 RBIs in 94 games for Triple-A Pawtucket, he was called up when the Red Sox released veteran Bill Buckner on July 23.

In his major-league debut, on July 25 against Seattle, the 6-foot-5 left-handed slugger struck out and grounded into a double play in his first two at-bats. But in his third, facing lefty Stan Clarke with the score tied 5-5, Horn hammered a two-run homer over the left-field wall to propel the Red Sox to an 11-5 win.1 The next night he pounded out three hits, including a solo homer, and drove in three runs.

After batting .370 (10-for-27) with three doubles and three homers during an eight-game road trip, Horn returned to Fenway Park as a cult hero. He homered 10 times in his first 31 games – the second fastest Red Sox player to reach double figures, behind George Scott.2 Horn finished the season with 14 homers and 34 RBIs in 46 games.

But Horn could not sustain his early success. His defensive deficiencies – combined with Jim Rice’s move to DH to make room for 24-year-old Mike Greenwell3 in left field – limited him to just 24 games as a DH and pinch-hitter in 1988. He hit just .148 with two homers before being sent back to Triple A.

Horn was back with Boston to start the 1989 season but played sparingly; he was sent down in early June after hitting .114 with no homers in 44 at-bats. He returned in September, serving mainly as a pinch-hitter in 10 games.

Released after the season, Horn signed a minor-league contract with the Baltimore Orioles on February 20, 1990. With spring training closed because of the owners’ lockout, he started with Triple-A Rochester, where he hit five homers in 32 at-bats in minor-league exhibition play.4

That outburst earned Horn a tryout when the lockout ended.5 Four days later, he was with the big club in Kansas City for Opening Day.6

Both teams entered the season hoping to contend for a division title. The previous season Baltimore had dropped two of three to Toronto in the final series to finish second, two games back of the Blue Jays. Kansas City had won 92 games but finished seven games back of Oakland in the AL West.

The Royals started Bret Saberhagen; he had posted a 23-6 record and led the league with 2.16 ERA the previous season to win AL Cy Young Award.7

Saberhagen set the Orioles down in order in the first but allowed singles to Mickey Tettleton and Randy Milligan to start the second. Horn followed with a homer in his first at-bat that splashed in the fountain8 in right-center and gave his new club a 3-0 lead.

Baltimore starter Bob Milacki held Kansas City hitless through three innings, though he issued leadoff walks to Gerald Perry in the first and Bo Jackson in the second. In the fourth, he retired the first two before walking Jackson again. Danny Tartabull collected Kansas City’s first hit – a homer to left to cut the Baltimore lead to 3-2.

In the fifth, singles by Kurt Stillwell and Perry put runners at the corners for Kansas City with two outs, but Milacki got Kevin Seitzer to line to third.

After Horn’s home run, Saberhagen retired 10 of 11 batters before surrendering singles to Billy Ripken and Phil Bradley in the fifth, but he worked out of the jam by retiring Joe Orsulak and Cal Ripken Jr. The next inning, he worked around two-out singles by Horn and Craig Worthington.

In the bottom of the sixth, veteran Joe Price9 relieved Milacki. With one out, Jackson and Tartabull singled. One out later, Stillwell grounded a double to left to give Kansas City a 4-3 lead. Then Royals second baseman Frank White blasted a full-count pitch to left for a homer. Kansas City had scored four runs to lead 6-3.10

“I’m thinking in that situation, I’ve got two outs and a full count, just throw the ball hard and see what happens,” said Price after the game. That would be OK in spring training, but when the season starts, I’ve got to make a better pitch than that.”11

Steve Farr, in relief of Saberhagen, pitched a perfect seventh inning but ran into trouble in the eighth. He plunked Cal Ripken Jr. and, one out later, allowed a single to Milligan. After a wild pitch moved the runners up, Horn blasted a homer deep into the right-field bullpen to tie the game. He was the first Oriole with two homers on Opening Day since Brooks Robinson in 1973.12 He set a club record with six RBIs on Opening Day.13

“The only ability of mine that was in doubt was the ability to get in the lineup,” said Horn afterward, referring to his Boston days. “I never had a chance to get in there on an everyday basis. I don’t know why. I got my chance here. Opportunity knocked twice, and I was there to open the door.”14

After the game, Horn thought about his mother, who was recovering from a stroke suffered on April 1. “I wanted to dedicate this game and the season to my mom,” he said. “I just hope she is able to see the highlights.”15

Baltimore manager Frank Robinson joked, “He’s spoiled me now. Anything less than that, and he’s gone.”16

Jay Aldrich17 shut the Royals out in the eighth, giving up just a single to White. Jeff Montgomery pitched the ninth for Kansas City and survived a two-out double by Orsulak.

The Royals had a chance to win in their last at-bat. With two outs, George Brett reached on an error by first baseman Milligan; Jackson singled to third but Tartabull struck out to send the game to extra innings.

Each team had a baserunner in the 10th, but Montgomery and Aldrich kept the game tied 6-6.

Leading off the 11th, Billy Ripken drew a walk against Montgomery. Brady Anderson entered to pinch-run. Anderson advanced to second on Bradley’s sacrifice but was caught stealing third for the second out.

But Orsulak singled to second to put the tiebreaking run on again. Cal Ripken Jr. lined a single to right. Tartabull fumbled the ball for an error and second baseman Steve Jeltz – who had entered in the ninth after the Royals pinch-ran for White – incorrectly lined up between first and second for the cutoff throw.

By the time Tartabull located his cutoff, third-base coach Cal Ripken Sr. waved Orsulak home; he was safe on a close play.

“Jeltz should have been down the line,” said Royals manager John Wathan. “Forget about the guy going to second. He doesn’t mean anything.”18

“I had in my mind if [Orsulak] rounded third too far, I could nail him,” explained Jeltz.19 “The last time I looked – I just had a chance for a quick glance – he was two-thirds the way to third. When I got the ball, I pumped and looked, he was halfway home. It was too late.”20

“Cal gambled and won,” said Robinson after the game. “He was very aggressive. I wouldn’t second-guess him on that.”21

Gregg Olson retired the Royals in order to preserve the win.22 The final out came on a high chopper off the bat of Brett. Olson tripped while fielding the ball behind the mound but managed to make a side-arm throw from his knees.23

Manager Robinson remarked later, “I know there are 161 [games] to go, but I don’t care. That will rate as one of the best plays of the year.”24

But despite a short stay in Boston, Horn had left his mark in the minds of Red Sox fans. His memory lives on today in the form of a popular Red Sox fans’ message board named in his honor, Sons of Sam Horn.27

The author skipped his classes at the University of Arkansas to make the 3½-hour drive with some college buddies to sit in the left-field bleachers. It was his first Opening Day game.

In addition to the references cited in the Notes, the author consulted data from Baseball-Reference and Retrosheet.

1 Before facing Clarke, Horn was in the on-deck circle and heard Red Sox manager John McNamara calling to him from the dugout. Fearing he was about to be removed for a pinch-hitter, Horn ignored the call and never looked over. Finally, the batboy tapped Horn, who looked over to the dugout to see McNamara give him the thumbs-up and wish him good luck. Ian Browne, “HRs, Compassion Made Horn a Sox Cult Hero,” MLB.com, December 5, 2019. https://www.mlb.com/news/sam-horn-red-sox-cult-hero.

5 Horn’s tryout was delayed three days while he made a trip to see his mother in San Diego after she suffered a stroke on April 1.

6 After the lockout ended, the season began one week later than scheduled.

7 In the offseason, the Royals had signed Mark Davis, who had won the NL Cy Young Award in 1989. This made them the first major-league team to have both reigning winners on their staff. Davis had signed a four-year deal for $13 million, making him the highest-paid relief pitcher in baseball history. Interestingly, Royals manager Wathan chose not to use the left-handed Davis against the left-handed-hitting Horn with two on in the eighth. Davis would record the last out of the 11th inning in this game – after the Orioles had taken the lead.

9 The 33-year-old left-hander was making his first appearance as an Oriole. It was his final major-league season.

10 White would play in 81 more games in the final year of his 18-year career – all with the Royals – but homered just once more, on July 4.

17 The 29-year-old right-hander was making his first appearance as an Oriole. He would appear in just seven games and give up 11 earned runs in 12 innings. He received the win in this game. It was the last of his six career wins.

19 This was his first game with Kansas City. In his previous seven years with Philadelphia, Jeltz was primarily a shortstop. He had played just 27 games at second base, starting in only ten of them.

23 Baltimore GM Roland Hemond called it “one of the greatest fielding plays I’ve ever seen a pitcher make.” Kent Baker, “Olson Goes to His Knees to Bring Royals to Theirs,” Baltimore Sun, April 10, 1990: B1.

27 For the story of how it came to be named after Horn and his involvement in the site, see Ian Browne’s https://www.mlb.com/news/sam-horn-red-sox-cult-hero.