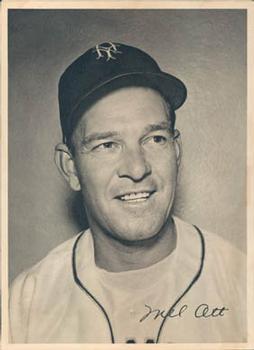 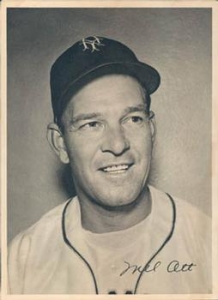 When Mel Ott smacked his 500th career home run, it was the latest in an outstanding résumé of achievements for the New York Giants icon, including being the NL leader in walks six times, home runs six times, on-base percentage four times, and runs scored twice.

Ott’s output made him a Giants mainstay and a fan favorite over 22 seasons. A quiet manner belied menacing power at the plate.  He was also the player-manager of the Giants from 1942 to 1948.

For the paid crowd of 19,318 plus 2,780 servicemen at the Polo Grounds on August 1, 1945, the Giants-Braves game was an opportunity to watch one of the game’s finest reach rarefied territory. Only two players to date had crossed the 500 mark in homers — Babe Ruth with 714 and Jimmie Foxx with 531. (The latter, then in his final major-league season, added three more in his career.)

Ott’s 2-for-4 performance was just part of a Giants offense that resulted in 14 hits against the Beantown visitors. The barrage began by tagging Braves righty Nate Andrews for four consecutive singles to start the bottom of the first.

Leadoff hitter Whitey Lockman — a rookie with 32 games and a .341 batting average in ’45 — and George Hausmann occupied first and second bases when Ott entered his first hit on the scorecard. His single sent Lockman home and Hausmann to third base; Danny Gardella knocked the fourth consecutive single, a hit to right field that scored Hausmann and gave Ott enough time to get to third base.

It appeared that the Braves would develop their own threat in the top of the second with leadoff singles by Butch Nieman and Carden Gillenwater. But Nieman’s attempt to score from first failed; Gillenwater dashed to third base and scored on Chuck Workman’s fly out to Ott in right field. Whitey Wietelmann continued to worry Giants fans with a single. But New York right-hander Van Lingle Mungo dismissed Hutchings with a strikeout.

The run gap closed to one in the top of the third inning. Boston’s leadoff hitter, Dick Culler, banged a single and reached second base on Phil Masi’s sacrifice bunt to Billy Jurges at third base. Culler moved up a base on a passed ball and scored on Holmes’s single. New York’s lead was down to 3-2.

Slim Emmerich took over from Mungo, but the righty didn’t do much immediate good — Joe Medwick’s single and Nieman’s walk loaded the bases. Gillenwater’s double-play grounder to shortstop relieved Giants rooters of any further concern.

Ott’s 500th career homer, a solo shot, started the bottom of the third and put the home team up 4-2. Louis Effrat of the New York Times described the pause in the game as a “boisterous ovation” after the stadium announcer let the crowd know about the milestone.1 The blast was not tape-measure, though. Dick Young of the Daily News wrote, “It was a sort of fair-to-middlin’ bargain, marked down to 319 feet.”2

Lockman followed suit with a leadoff homer in the bottom of the fourth, increasing the lead to 5-2.

In the Giants’ half of the fifth, the score escalated to 7-2. Hutchings retired Kerr and Jurges on grounders to Kerr’s shortstop counterpart Culler. But Emmerich’s single and Hutchings’ plunking of Lockman gave the Giants first and second bases. Hausmann then knocked in both runners with one of his eight triples in ’45.

Braves reliever Ed Wright, another right-hander, came in to face the hero of the moment; Ott failed to get his third hit of the day. A grounder to Wietelmann ended the menace of a higher run deficit for the Braves.

But their reprieve was temporary.

The Giants added a couple of runs in the sixth to make the score 9-2. Gardella’s grounder to first baseman Medwick and Weintraub striking out looking portended a quick end to the inning. But Lombardi and Kerr banged a pair of singles off Wright; Jurges’ double scored both.

Ott’s teammates had splendid afternoons that were overshadowed by his 500th home run. Aside from the walk and HBP, Lockman went 2-for-3 with three runs scored and an RBI. It was indicative of his first year in the majors — Lockman played in 32 games and batted .341 in 1945.

Witnessing history and celebrating the seven-run victory margin was an emotional boon for Giants fans, who had followed the team’s 9-11 road trip between July 12 and July 28. Their team split the previous day’s doubleheader against the Braves at the Polo Grounds.

New York’s authoritative victory ignited a 14-6 run in the first 20 games of August. They ended the season with a fifth-place finish at 78-74-2. Boston lagged in sixth place with a 67-85-2 record.

Ott played in 135 games in 1945 and swatted 10 more home runs. Although aging—Ott turned 36 before the season—he could inspire alarm among National League pitchers. The slugger ended 1945 with a .308 average, seventh among his NL brethren. He tied for fourth place in home runs with the Cardinals’ Whitey Kurowski. They both had 21 round-trippers. Ott was also a magnet for the baseball, leading the league in hit-by-pitch.

The Louisiana native’s presence was a cornerstone of New York’s lineup with at least 120 games a season since 1928, his third year in the major leagues. It declined with a total of 35 games before retirement — 31 in 1946 and 4 in 1947. His 511th and last career home run was on Opening Day 1946. As with his first major-league home run, in July 1927, and his 500th homer 18 years later, it happened at the Polo Grounds. The Sporting News noted that the right fielder smacked 63 percent of his home runs in the Upper Manhattan ballyard (313 vs. 187 in other NL parks).3

Ott played in his final major-league game on July 11, 1947. He continued managing in 1948, but moved to a front-office job in the middle of the season when owner Horace Stoneham replaced him with Leo Durocher, a longtime Giants rival as both a player and manager. In 1951 Ott was inducted into the Baseball Hall of Fame.