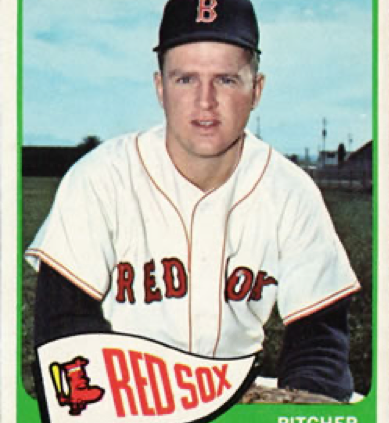 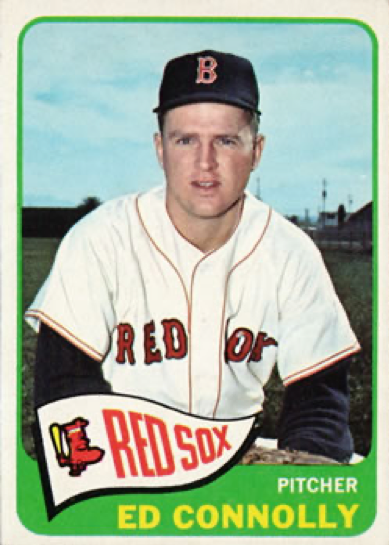 Who was the greatest pitcher in Massachusetts history? Some fans would nominate standout hurlers from Boston’s professional teams, like Cy Young, Warren Spahn, or Pedro Martinez. Others might offer the names of Tim Keefe, John Clarkson, and Tom Glavine, Bay State natives who earned Hall of Fame honors by winning more than 300 games apiece.1

In August 1966, the less storied Ed Connolly made a dark-horse bid for this mythical honor by pitching an unusual “cross-state” two-hit shutout. Connolly’s team, the Pittsfield Red Sox of the Double-A Eastern League, split a game between Boston and Pittsfield – and Connolly dominated in both cities, on opposite ends of the state.

Connolly’s game for the ages began on August 15 as a minor/major doubleheader at Fenway Park in Boston, the first minor-league game played there.2 Pittsfield and its opponent, the Pawtucket Indians, had to suspend their game in the fifth inning so the big-league Red Sox could start their contest against the Baltimore Orioles. Through four innings at Fenway, Connolly yielded one hit.

Two nights later, the teams resumed the game at Pittsfield’s usual home ballpark, Wahconah Park, about 135 miles from Fenway. Connolly pitched the remaining five innings at Wahconah and gave up only one additional hit as Pittsfield romped 7-0. It was a brief burst of dominance, but for a few days, the 26-year-old lefty was practically unhittable anywhere in New England’s central state.

Connolly wasn’t technically a Bay State native, having been born in Brooklyn, New York. But he grew up in Pittsfield, leading a local Little League team to the state finals in 1952 and starring at the city’s St. Joseph’s High School. Connolly pitched for the University of Massachusetts at Amherst before turning pro.3 And he had a family connection to Boston’s “Olde Towne Team.” His father, also named Ed Connolly, caught for the Red Sox between 1929 and 1932.

Ed Senior had died unexpectedly on November 12, 1963, while working in a forest for the Massachusetts Department of Natural Resources.4 He didn’t get to see spring training of 1964, when his son’s effective pitching unexpectedly earned him the final spot on Boston’s lefty-starved staff. The younger Connolly threw a two-hit shutout against the Kansas City A’s on September 15, the highlight of his fourth professional campaign. Otherwise he struggled in the majors, posting a record of 4-11 with a 4.91 ERA in 27 games and walking 64 batters in 80⅔ innings.5 He ranked fifth in the AL in wild pitches with 11. Suffering from a sore arm, he was unimpressive in 1965, spending the season at Triple-A Toronto and going 2-5 with a 4.31 ERA in 22 games. The 1965 Red Sox yearbook noted the pitcher’s “inability to master control.”6

August 1966 found Connolly pitching in his hometown of Pittsfield, trying to reestablish his place in the bigs. The Red Sox announced the minor/major doubleheader in late June,7 giving Connolly a perfect opportunity to show his stuff. Pittsfield owner Joe Buzas said the game at Fenway would give Boston fans a look at the up-and-coming talent in the club’s farm system.8 Reports at the time said it was only the second game to be played by minor leaguers at a major-league park. York and Elmira, also of the Eastern League, did battle at Baltimore’s Municipal Stadium in August 1965.9 Pittsfield came into the game having won seven of its previous nine games, while Pawtucket had won four in a row.10

Manager Eddie Popowski’s Pittsfield club sat in fifth place in a six-team league, with a record of 52-64. They were 21 games behind first-place Elmira, an Orioles farm team.11

From the mid-1970s until 2020, the city of Pawtucket, Rhode Island, was synonymous with Boston’s Triple-A team.14 But in 1966 it was home to a squad of Cleveland Indians prospects, skippered by Clay Bryant. Pawtucket held third place with a 56-59 record, 16½ games back. Familiar names in the lineup included two future major-league All-Stars – second baseman Dave Nelson, later a Texas Ranger, and future Kansas City Royal Richie Scheinblum, the team leader with 55 RBIs, in left field. Utilityman Gomer Hodge, who made a brief big-league splash as a pinch-hitter with the 1971 Indians, appeared in the later innings as – appropriately enough – a pinch-hitter.15

The start went to 19-year-old righty Jim Wingate, a 15th-round draft pick that June from Trinity University in Texas. Wingate went 4-6 with a 2.44 ERA in 13 games with Pawtucket that season, including 12 starts. He had thrown a no-hitter on July 17, beating Waterbury 5-0,16 and was described as Pawtucket’s top prospect.17

The teams almost didn’t get a chance to play, as rain delayed the scheduled 4:30 P.M. start by 90 minutes.18 When they finally took the field, Connolly overmatched the Indians with a “sharp curve” and “jumping fast ball.” He whiffed four, giving up one walk and one hit – a third-inning single to catcher Luis Isaac, later the Cleveland Indians’ bullpen coach for 20 seasons.19

Pittsfield jumped on Wingate in the second, as Moses smashed a double to left field and came around to score on two fly balls. The Red Sox doubled their advantage in the third: A two-base throwing error on a groundball landed right fielder Chris Coletta on second base, and Torchia singled him home. In the fourth, Pittsfield bunched three hits, a walk, a wild pitch, and a sacrifice fly to run the score to 5-0. Second baseman Al Montreuil picked up the inning’s first RBI with a single, while Connolly drove in two more with his own hit. The game was paused at 6:58 P.M., at the end of the fourth, so the Boston-Baltimore game could begin at 7:30 P.M.20

News stories in Pittsfield and Boston did not give attendance for the minor-league game, though the rain doubtless dampened interest. The evening Red Sox game drew a modest crowd of 10,018.

The suspended game resumed at Wahconah Park on the night of August 17, before a regularly scheduled game. Bryant replaced Wingate with 19-year-old righty Mike Hedlund, who had made six appearances with Cleveland the year before.

With 3,310 fans watching, Pittsfield nicked Hedlund for two runs in the sixth inning. Montreuil singled to center field and shortstop Richard Kratz drove him in with a triple down the right-field line. Bobby Mitchell, who replaced Conigliaro,21 grounded a single to left-center field to score Kratz. These were Pittsfield’s only hits in the Wahconah Park portion of the game.22 A pitcher credited as “Alagus” in the Pittsfield newspaper worked a hitless, scoreless ninth for Pawtucket. It was probably John Olagues, the Indians’ first-round pick in the secondary phase of the June 1966 draft. Olagues, from Tulane University, racked up a 13.50 ERA in 26 games over three professional seasons.

Connolly continued to hold Pawtucket in check. He struck out five hitters in the final four innings, bringing his total to nine. No Indians runner reached third base. Connolly surrendered his second hit with one out in the ninth, as center fielder Frank Baker poked a single into right field. One out later, with Baker on second, Connolly struck out right fielder Jerry Kelly23 to end the game in 2 hours and 7 minutes and record his only shutout of the season.24 Pittsfield also took the nightcap, 5-2, on six shutout innings of relief by pitcher Douglas Gentry.

Pittsfield and Pawtucket ended the season tied for second with identical 68-71 records, 20 games behind Elmira. Pittsfield’s finish was good enough to earn Popowski a promotion: After more than 20 seasons managing in Boston’s farm system, he joined the parent Red Sox as a coach for nine seasons between 1967 and 1976. He also served as interim Red Sox manager for nine games in 1969 and one game in 1973, following the departures of Dick Williams and Eddie Kasko.

Ed Connolly closed 1966 with a 5-10 record and 4.43 ERA in 28 games, including 17 starts, not good enough to earn a return ticket to Boston. His August performance might have drawn attention from the Indians, though. In November 1966, Pawtucket chose Connolly in the minor-league draft, paying $4,000 for him.25 He returned to the big leagues with Cleveland in 1967, going 2-1 with a 7.48 ERA in 15 games.26 Although he made one last appearance against Boston on July 21, pitching three innings of one-hit, one-run relief in a game at Cleveland, he did not get any additional chances to pitch at Fenway Park.

Neither Baseball-Reference nor Retrosheet provides box scores of minor-league games, but the August 18, 1966, edition of the Berkshire Eagle (Pittsfield, Massachusetts) published a box score.

Image of 1965 Topps card #543 downloaded from the Trading Card Database.

1 Keefe and Clarkson were born in Cambridge, Glavine in Concord.

5 Bill Nowlin’s SABR biography of Connolly points out that he received no run support from his Red Sox teammates in 1964: In his first 11 starts, Boston scored a total of 15 runs. That said, Connolly’s numbers clearly indicate that he struggled that season. Nowlin also mentions that Connolly began the 1965 season with Boston but did not pitch in a regular-season game before being farmed out to Toronto.

12 Conigliaro and Guindon, incidentally, were also both natives of eastern Massachusetts.

13 Bob Montgomery, another future big-league catcher on the 1966 Pittsfield squad, was called up to Triple-A Toronto the day before the game. Montgomery finally got to play at Fenway in 1970, when he appeared in 22 games with Boston. See: “Bob Montgomery Is Transferred to Maple Leafs,” Berkshire Eagle, August 15, 1966: 24.

14 From 1970 through 1972, Pawtucket was home to Double-A Red Sox prospects playing in the Eastern League. Boston moved its Triple-A affiliate from Louisville, Kentucky, to Pawtucket for the 1973 season.

15 Hodge struck out for pitcher Mike Hedlund in the eighth inning.

21 Conigliaro was withdrawn from the game in the fourth inning after suffering a charley horse and, potentially, a sprained thumb while running out a groundball. His injuries were minor and he appeared in the second game of the night. O’Gara, “Pittsfield Leads 5-0 After 4 at Fenway.”

26 He also appeared at 11 games in Triple A. It was his last professional season.