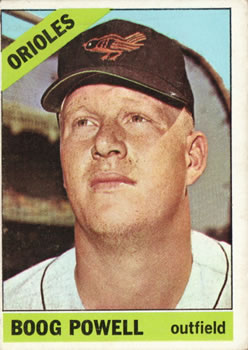 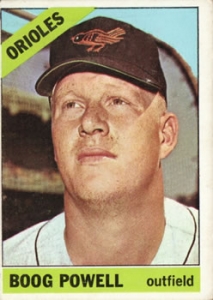 On August 15, 1966, Boog Powell of the Baltimore Orioles delighted Chesapeake Bay’s baseball fans when he swatted three balls into the Fenway Park stands.

The 230-pound, 6-foot-4 first baseman was responsible for all the runs scored in Baltimore’s 4-2 victory over the last-place Boston Red Sox. Powell’s feat in the 11-inning contest secured the first “W” in a three-game sweep.

In his first at-bat, Powell struck out in the top of the second inning, giving no indication for the 10,018 fans in attendance of what was to follow.

Red Sox right-hander Jim Lonborg retired two-thirds of the heart of the Orioles order in the top of the fourth – Frank Robinson on a fly out to George Thomas and Brooks Robinson on a groundout to his counterpart Joe Foy at third base – before Powell crushed a solo homer. Boston’s rooters winced as the trajectory of the home-run balls ended the spheroid’s journey in the left-field stands. Powell revealed, “All three pitches were outside. Sure, the left-field fence is close. But I wasn’t consciously swinging for it.”1

Powell hit a single with two outs and Russ Snyder on first base in the top of the sixth. But Lonborg avoided further damage with Curt Blefary’s grounder to second baseman George Smith.

The 1-0 Baltimore lead became a 2-1 deficit in the bottom of the sixth.

Foy led off with a single; Snyder’s throw to shortstop Luis Aparicio nailed him trying to make it a double. Don Demeter then hit a one-out double and Tony Conigliaro’s homer gave the host team a pair of runs.

Stu Miller succeeded McNally and faced Boston’s bottom of the order. It was a quick endeavor. Bob Tillman grounded to Aparicio; Smith and Lonborg struck out.

Carl Yastrzemski substituted for Thomas in left field to begin the top of the eighth. Lonborg protected the 2-1 lead, allowing one base hit, a single by Snyder.

In the top of the ninth, Powell’s solo home run evened the score at 2-2.

Vic Roznovsky fouled out to third baseman Foy to begin the Orioles’ half of the 10th inning. Bauer selected Sam Bowens to pinch-hit for Miller, but he repeated Roznovsky’s effort with a foul ball to Foy.

Aparicio’s single and steal of second base conjured visions of a two-out rally; Snyder’s groundball to Smith ended the attempt.

Jack Fisher took the hill in the bottom of the 10th, becoming the third Oriole on the pitching mound. Pinch-hitting for Smith to lead off, Dalton Jones got on first base with a bunt single. Lenny Green smacked a lineout to Snyder in center field as he went to the batter’s box in place of Lonborg, but Eddie Kasko’s double-play grounder sent the game into the 11th inning.

Jones’s duty was not limited to pinch hitting – he took over second-base defense from Smith. John Wyatt relieved Lonborg and started his appearance by walking Frank Robinson. Brooks Robinson’s lineout to Conigliaro preceded Powell’s third smash of the day to put the Orioles up 4-2.

Powell broke down Boston’s strategy on this last home run: “They had been pitching me outside, so I figured I’d look inside this time. I mean, they can’t pitch me outside again. I guess I’m not that smart, because here it comes again – outside. I swung and the ball hit my bat, that’s all.”2

Foy and Demeter mounted a rally with back-to-back singles off Fisher in the bottom of the 11th, putting Red Sox runners on first and second. It mandated Baltimore manager Bauer to make a pitching change; Dick Hall came to the Fenway Park mound.

Cleanup hitter Conigliaro whiffed, but George Scott’s single loaded the bases. Hall quieted concerns by striking out Yastrzemski, then in his sixth season of a 23-year career.

It came down to Tillman, who had no hits in four at bats. His fly out to Paul Blair in center field ended the game; Blair had replaced Blefary at the beginning of the Boston 11th.

Finding a reason for effectiveness is customary after an extraordinary outing. Powell streamlined the rationale: “People say I’ve moved back in the box a couple of inches, but that’s not the reason. Contact, that’s it. I’m meeting the ball. It’s as simple as that.”3

It was the third time Powell crushed a trio of home runs in one game, the other achievements coming in 1963 and 1964 against the Washington Senators on road trips.

The victory gave the Orioles a 77-41 record. They led the AL by a comfortable margin of 13½ games over the second-place Tigers; finished ’66 at 97-63; won the AL pennant; and swept the Dodgers in the World Series. Frank Robinson and Powell clouted American League pitching to gain the number 1 and 3 slots in home runs. In the majors, they were number 1 and 8. Robinson had 49 homers. Powell, 34.

Powell finished 1966 with a .287 batting average. There were many great moments for Baltimore in that World Series championship season, but his performance on August 15 ranks among the most impressive. It contributed to a fantastic year that earned Powell the American League Comeback Player of the Award from The Sporting News.