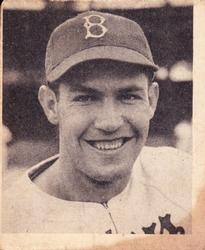 One evening in the summer of 1947, the National League’s best and worst teams put on a display that a future baseball commissioner labeled “a farcical exhibition which was a disgrace to baseball and a complete travesty of all the rules of sportsmanship.”1 The Philadelphia Phillies and Brooklyn Dodgers spent 12 anarchic minutes in Philadelphia subverting the rules of the sport, with the home team freely surrendering bases to the visitors, who were attempting to record three outs and let their opponents bat.

The game’s bizarre resolution had roots in a law from decades before baseball’s inception. Pennsylvania’s Sunday Act of 1794 made it a crime to engage in “any worldly employment or business whatsoever on the Lord’s Day.”2 Such so-called Blue Laws, which punitively enforced the concept that the Sabbath was a day of rest by prohibiting work and most recreation on Sundays, were common in eighteenth-century America.

As baseball’s popularity grew in the nineteenth century, many jurisdictions loosened or repealed ordinances outlawing Sunday games,3 but Pennsylvania didn’t follow suit4 until voters overturned the Sunday Act in 1933,5 setting the stage for chaos when the Phillies hosted the Dodgers for a Sunday doubleheader 14 years later.

With a record of 70-44 at the start of the day, Brooklyn sat atop the NL standings. The team hadn’t had a losing record at any point and had remained above .500 since the fifth game of the season, in which they beat the Phillies in a game made infamous by Philadelphia manager Ben Chapman’s vitriolic, racist bench jockeying of Dodgers rookie Jackie Robinson.6

In the opposite dugout, the 44-68 Phillies were mired in last place, 25 games behind Brooklyn. They would remain in the NL basement from July 24 to the end of the season.7

Watching the opening game of the doubleheader, however, a casual fan among the crowd of 32,220 might have guessed that those records were reversed. The Dodgers committed seven errors, and Brooklyn hitters couldn’t figure out Dutch Leonard’s knuckleball, giving the 38-year-old his 14th win of the season in a 4-0 shutout.8

Perhaps the Dodgers were looking ahead to their next opponent. A four-game series with the second-place St. Louis Cardinals was slated to start the following day at Ebbets Field. The defending World Series champions had won 13 of 17 games in August, including that day’s matchup with Pittsburgh, putting St. Louis 4½ games back of Brooklyn.9 A win in the nightcap would put the Dodgers up five games in the standings, but a loss would give the red-hot Cardinals the potential to even things up with a sweep in Brooklyn.10

To earn the win, though, the Dodgers needed to beat both the Phillies and the clock. When Pennsylvania legalized Sunday baseball, there was a catch. The replacement Blue Law allowed only a small window of game time with a strict 7 P.M. curfew. It dictated that no inning could start after 6:44 P.M. and that all game activity must cease at 6:59.

The Dodgers wasted no time hanging runs on Phillies starter Ken Heintzelman. Second baseman Eddie Stanky led off by laying down a bunt single on the second pitch of the game. One pitch later, Robinson sacrificed him to second. Left fielder Pete Reiser drove Stanky home with a single to left and advanced to second on Del Ennis’s throw to the plate. Reiser then scored on Carl Furillo’s double to left.

Brooklyn added another run in the second, prompting Chapman to pull Heintzelman,11 who’d given up three runs on six hits and a walk in two innings. Right-hander Al Jurisich took the mound for the Phillies to start the third and retired the first two batters before surrendering two singles that put Pee Wee Reese and Stan Rojek at the corners. Jurisich then induced Bobby Bragan to hit a grounder to Ralph LaPointe, only to see his shortstop botch the play, allowing Reese to scamper home for an unearned run and a 4-0 Brooklyn lead.

The Phillies answered in the bottom of the third when Ennis and cleanup hitter Johnny Wyrostek hit back-to-back two-out doubles. Then in the fifth, Philadelphia tied the game behind Ennis’s sacrifice fly to center and a two-run single by third baseman Lee Handley.12

Both teams went scoreless in the sixth, but there was a five-minute delay as Stanky got into an argument over home-plate umpire George Barr’s strike zone during his at-bat and was ejected.13 Stanky’s replacement, Al Gionfriddo, then struck out looking and argued with Barr himself.

The time spent yelling at the ump contributed to both teams drastically shifting their strategies. With the clock at 6:39 and the score still tied, Chapman attempted to postpone the remainder of the game via filibuster, chatting with Jurisich and his fielders until the clock ran out. Umpire Barr, however, forced him to return to the dugout two minutes shy of the 6:44 mark,14 allowing the seventh inning to begin. After a Robinson groundout to short, Reiser walked, then stole second. Jurisich walked pinch-hitter Gene Hermanski, then gave up an RBI single to right fielder Dixie Walker.

With the Dodgers leading 5-4, Chapman realized that unless his team scored in the bottom of the inning, the game would go into the record books as a complete seven-inning game. On the other hand, if the Phillies didn’t get their turn at bat before the 6:59 curfew, the score would revert to the 4-4 tie in the sixth, to be resumed when the Dodgers returned to Shibe Park in September. Furthermore, the teams would get three full innings as opposed to the Phillies having just three outs.

All Philadelphia had to do was avoid getting two more Brooklyn outs.

Chapman walked to the mound to take the ball from Jurisich, signaling for right-hander Charley Schanz to come from the bullpen and warm up as precious seconds ticked away. With Schanz working slowly and deliberately to Reese, the Dodgers caught on to the Phillies’ scheme and realized they needed to make two more outs as quickly as possible.

As Reese swung at a pitch that may have been well outside the zone for a third strike, both Hermanski and Walker took off in a double-steal attempt, each casually strolling to the next base. Phillies catcher Don Padgett didn’t take the bait, though, allowing both men to safely step on the bags at their leisure.

With first base now open, Padgett gave Schanz the signal to intentionally walk Rojek. Recognizing the need to get the third out and end the inning, the right-handed Rojek leapt across the plate into the left-handed batter’s box and attempted to swing at the well-outside pitch. This caused a frustrated Barr to snap at Rojek that he’d be fined if he tried that again.

Schanz took advantage of the umpire barking at Rojek to call for time, claiming that he had sweat on his glasses and couldn’t see Padgett’s signals.15 He waved for the batboy to bring him a towel so he could wipe them clean, taking his time to make sure they were spotless before sending the batboy back to the dugout, then completing the intentional walk.

As Bragan stepped into the batter’s box and Schanz came set, Hermanski stepped off third and, maintaining eye contact with the pitcher, sauntered down the line in an attempt to steal home. As the base “runner” neared the plate, Schanz tossed the ball to his catcher.

Behind Padgett, Barr bellowed, “That will cost you $100 if you don’t tag him!”16 The catcher tapped the Dodger outfielder, sending the game into the bottom of the seventh with four minutes until curfew.

After the changeover, Harry Walker reported to the batter’s box having “accidentally” forgotten to bring his bat with him. After retrieving a bat from the dugout, Walker proceeded to run down the final minute by elaborately adjusting his cap and brushing his hair between each of three pitches before the game was legally halted and officially went back to being a 4-4 tie.

Someone tossed a soda bottle at Barr. Another fan stole Pee Wee Reese’s hat off his head.17 Stanky, a Philadelphia native, expressed his frustration, saying politicians should “abolish the silly law that can ruin a baseball game so completely, or else the owners should take baseball out of the state.”18

The next day, National League President Ford Frick, who became commissioner four years later, expressed his disgust with the teams’ antics and ruled that when the game resumed on September 25, Brooklyn’s run would stand and Harry Walker would be at bat facing a 2-and-1 count.19

When the Dodgers returned to Philadelphia, though, the once vital win had lost nearly all its value. The Dodgers arrived at Shibe Park three days after clinching the NL pennant, and were preparing for a motorcade and gala celebration the next afternoon.20 Four days after that, they’d head to the Bronx to open the World Series against the Yankees.21

Prior to their regularly scheduled game, the teams wrapped up their August affair. While the Phillies added a run on Andy Seminick’s solo homer in the eighth, the Dodgers won 7-5, tacking on a run in each of the eighth and ninth innings.

This article was reviewed by Kevin Larkin and copy-edited by Len Levin.

4 The Phillies, Athletics, and Pirates regularly capped off weekend homestands with a single game in Cleveland, Brooklyn, Cincinnati, or Washington. Game Five of the 1929 World Series between the Philadelphia A’s and Chicago Cubs had to be postponed because it fell on a Sunday. In 1931 A’s executives began exploring options to relocate the team to Camden, New Jersey, just across the Delaware River. Bevis, “Never on Sunday.”

5 A year before voters changed the law, the Pittsburgh Crawfords squeezed in a Sunday night game against the Homestead Grays on a technicality. The first legally sanctioned major-league game played on Sunday in Pennsylvania was a 4-3 A’s loss to the Washington Senators on April 22, 1934. A week later, both the Pirates and Phillies hosted their first Sunday games.

7 The Philies did climb the standings in September, at least cosmetically. When the Pirates sank into a tie for the league-worst record, the eighth-place Phillies rose to a shared seventh place and moved up a spot only because “Philadelphia” comes before “Pittsburgh” alphabetically.

8 This was a second straight shutout for Leonard and gave him 19 consecutive scoreless innings. That streak extended only through the first inning of his next start before Cardinals right fielder Ron Northey scored an unearned run on a passed ball in the second.

9 Brooklyn had led St. Louis by 10 games at the end of July. During the same span, the Dodgers’ record was 7-9.

11 With the bases loaded and only one out, Chapman opted to pinch-hit Charlie Gilbert for Heintzelman. Gilbert grounded into a double play.

15 Which one can assume consisted of the not-difficult-to-spot 6-foot, 190-pound Padgett standing up with his right arm extended to indicate an intentional walk.

19 When Philadelphia general manager Herb Pennock complained that the Phillies were being singled out for their stalling tactics, Frick made clear that Brooklyn was equally guilty of unsportsmanlike behavior for trying to speed up the game by intentionally attempting to be put out.

21 The Dodgers dropped the World Series in seven games.