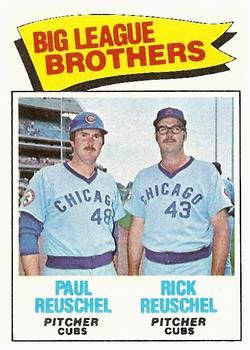 Rick Reuschel had followed in his older brother Paul’s footsteps at every level of Organized Baseball until Rick reached the majors first with the Chicago Cubs in 1972. Ever since then, Rick had rooted for Paul, also in the Cubs system, to join him on the big-league club. Paul got the call from the Cubs three years later, and in his 11th major-league appearance, on August 21, 1975, combined with Rick to shut out the Los Angeles Dodgers. They became the first-ever brothers, after 1900, to combine for a shutout.

The Reuschel brothers were big farmboys from Camp Point, Illinois, who resembled each other in build. With Rick at 6-feet-3 and 215 pounds and Paul at 6-feet-4 and 225 pounds, they were both imposing right-handers on the mound.

Paul Reuschel, born in January 1947, was more than two years older than Rick, preceding him in high school, American Legion, and college baseball. Paul was drafted out of high school by the Cincinnati Reds in the 26th round of the 1965 amateur draft. He didn’t sign, instead attending Western Illinois University, 45 miles from the Reuschels’ hometown. He was selected in the secondary phases of three later drafts, by the Washington Senators, California Angels, and Chicago Cubs, and signed with the Cubs in June 1968.

Rick Reuschel played on the same high-school and Legion teams as Paul, as well as attending Western Illinois. He was drafted in 1970 by the Cubs in the third round and progressed rapidly through their farm system. When Rick was promoted to the Cubs in mid-June of 1972, where he quickly became a mainstay in Chicago’s rotation, Paul took his place on the Triple-A Wichita roster.1

Three years later Paul Reuschel joined his brother on the Cubs roster. Rick believed Paul had been mishandled by the Cubs’ Double-A affiliate San Antonio in 1970. Paul was 8-3 at midseason that year but developed a sore arm and finished at 10-10.2 Paul eventually transitioned to relief in 1973 and recovered from his arm problems.

Rick Reuschel made his pitch for Paul’s promotion to the Cubs in a 1974 article in The Sporting News. “He’s got better stuff than I have.” Rick said. “He’s been pitching relief the last couple of years at Wichita, and I know he can help somebody up here.”3

After 35 appearances in 1975 for Wichita, where he posted a 6-4 record and a 4.89 ERA, Paul Reuschel was called up by the Cubs. He made his major-league debut on July 25, pitching the final two innings of a game that Rick had started.4

The brothers’ next appearance together occurred on August 21 against the Dodgers at Wrigley Field. The game had been rescheduled after being rained out the day before. A crowd of 8,377 attended the afternoon contest. Up to that point, Rick had a 9-13 record and a 3.33 ERA in 28 starts. The Cubs were in fifth place in the National League East with a 58-68 record. Paul had pitched in 10 games and posted a 1-1 record with one save and an ERA of 2.70.

Los Angeles was in second place in the NL West, a distant 16 games behind division leader Cincinnati, who would become known as the Big Red Machine. The Dodgers were finishing their longest road trip to that point of the season in which they were 9-2. Dodgers manager Walter Alston started Andy Messersmith, whose record was 14-12.

The Cubs wasted no time in getting to Messersmith. In the bottom of the first, NL batting leader Bill Madlock’s single, on a fly ball lost in the sun by right fielder Willie Crawford, scored Don Kessinger, who had led off the inning with a walk and reached second on Rick Monday’s single. Monday advanced to third on the play on an error by Crawford. After Jose Cardenal flied out, Jerry Morales’s groundout scored Monday for a 2-0 lead.

Chicago continued its attack on Messersmith in the second inning with a leadoff double by Manny Trillo. Steve Swisher’s sacrifice moved Trillo to third. After Rick Reuschel grounded out, Kessinger singled to score Trillo. Then Monday’s followed 16th home run of the season, to deep center field, made the score 5-0.

Messersmith had a rocky third inning with two walks and a wild pitch but kept the Cubs from scoring. Over the next three innings, he settled in and showed why he had been the runner-up for the Cy Young Award the year before. He allowed only one baserunner, on a walk.

Meanwhile, Rick Reuschel allowed only four hits and a walk through the first six innings. He started the top of the seventh by giving up a single to Steve Garvey. With one out, Cubs manager Jim Marshall pulled Rick, who had aggravated a tender spot on his index finger that was about to turn into a blister, and replaced him with his brother. Paul hit Steve Yeager with a pitch but retired the Dodgers without a run.

Messersmith gave up the game’s final two runs in the bottom half of the seventh when Cardenal’s double scored Kessinger and Madlock, both of whom had singled. Messersmith was lifted for knuckleball pitcher Charlie Hough, who finished out the game.

Paul Reuschel closed out the game for the Cubs, giving up one hit in 2⅔ innings.

The Long Beach (California) Press-Telegram reported that the Elias Sports Bureau had reviewed baseball records from the past 50 years and found that the Reuschel brothers’ combined shutout was the first in baseball history. Rick commented, “That’s the second time I’ve gotten into the record books this year.” He was referring to an earlier game in which he tied a record with three putouts in an inning by a pitcher.5

Rick’s victory was his third of the season against the Dodgers. Commenting on being pulled from the game without encountering trouble from Dodgers bats, he said, “I’ve tried everything. But the finger has bothered me for three years. It usually happens when it’s humid.”6 Rick said he would have been happier to come out of the game before the seventh inning. He said, “That way he [Paul] could have had a save.”7 Paul’s reaction was, “Just happy to be of help.”8

The only Dodgers highlight in the game was Davey Lopes’s steal of second in the sixth inning, which extended his record for stolen bases without being thrown out to 34. It was his 53rd steal of the season, and he finished with a career-high 77, which led the National League.

Messersmith’s loss was his eighth in his last 10 decisions. He finished the season with a 19-14 record. After the 1975 season, Messersmith and Dave McNally of the Baltimore Orioles were at the forefront of the labor arbitration case led by Marvin Miller, executive director of the Players Association, to void the reserve clause which effectively created free agency.

The Reuschel brothers appeared in the same game three more times the rest of the season.9 Rick finished the season with an 11-17 record in 38 starts. His 17 losses were the most in the National League. Paul had a 1-3 record with five saves in 28 appearances. The brothers continued to play together with the Cubs until Paul was traded to the Cleveland Indians on June 26, 1978.

The Elias Sports Bureau’s finding of the Reuschels’ record has been independently verified as the first since 1901 and the only occurrence as of 2021. The closest a pair of brothers have come to matching the Reuschels is Ramon and Pedro Martinez, who pitched the first seven innings of a Boston Red Sox shutout on October 2, 1999.10 Although not an all-inclusive list, other pairs of brothers who pitched in the same game include Christy and Henry Mathewson (1906), Dizzy and Paul Dean (1934), Eddie and Johnny O’Brien (1956), Von and Lindy McDaniel (1957), Phil and Joe Niekro (1973-74), and Rick and Mickey Mahler (1979).

Tom Ruane graciously provided verification that the Reuschel brothers have been the only pair in history to pitch a combined shutout. This article was fact-checked by Evan Katz and copy-edited by Len Levin.

4 Rick Reuschel was the losing pitcher in the Cubs’ 6-3 loss to the New York Mets.

9 One of those games was the Cubs’ 22-0 loss to the Pittsburgh Pirates on September 16. Rick Reuschel started and recorded only one out in the first inning, while allowing eight runs; Paul pitched the final two innings. The game is most notable because Pittsburgh’s Rennie Stennett set a modern-era major-league record with seven hits in a nine-inning game.