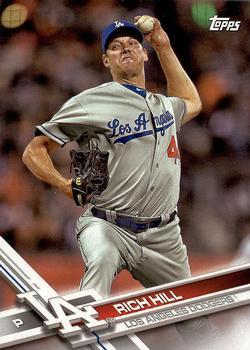 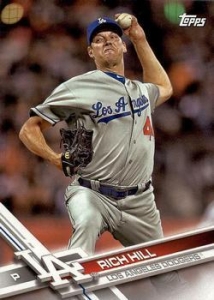 Rich Hill had bounced around professional baseball for 10 years before he arrived in Los Angeles in 2016. He began his major-league career as a starter with the Chicago Cubs, debuting in 2005 and compiling an 18-17 record in four seasons there. Over the next six years, he struggled with several injuries, never pitching more than 76 innings for any major-league team.1 He also struggled with personal loss when his infant son, Braden, died of medical issues in December 2014.2

Hill was used primarily as a relief pitcher after leaving the Cubs. The Oakland A’s made him a starter again after signing him for the 2016 season. He was 9-3 with a 2.25 ERA when he joined the Los Angeles Dodgers in a five-player trade on August 1, 2016.

Dodgers manager Dave Roberts added Hill to the team’s starting rotation. Hill continued to pitch well, posting a 3-2 record and a 1.82 ERA in the last two months of 2016. He stayed in the Dodgers rotation in 2017, compiling a 9-4 record with a 3.54 ERA at age 37 by the time the team arrived in Pittsburgh on August 21 for a four-game series with the Pirates.

Los Angeles held a commanding 21-game lead in the National League West Division after winning the first two games of the series. Pittsburgh was in fourth place, eight games behind the division-leading Cubs.

Right-hander Trevor Williams took the mound for the Pirates. Originally drafted by the Miami Marlins, Williams was traded to Pittsburgh at the end of the 2015 season. He spent 2016 with the Triple-A Indianapolis Indians, where he went 10-6 with a 2.42 ERA, then made his major-league debut that September.

Pittsburgh added Williams to its starting rotation in May 2017 when cancer treatment sidelined Jameson Taillon. Williams made his first start on May 8 in Los Angeles, the day of Taillon’s surgery, and he allowed six runs in the first inning of what turned out to be a 12-1 Dodgers win. Williams stabilized after that rough beginning, taking a regular turn in the rotation and throwing seven one-hit innings against the Detroit Tigers on August 7. His record was 5-6 entering his second start against the Dodgers.

Williams fared better this time. He scattered seven hits through the first eight innings and walked four batters, but the Dodgers were unable to capitalize on any of their opportunities.

Their best chance to score came in the fourth. Adrian Gonzalez and Yasiel Puig led off with singles. Logan Forsythe’s groundout put both runners in scoring position, but Williams gave an intentional pass to Austin Barnes to load the bases, and Hill lined out to shortstop to end the threat.

The Dodgers put two more runners in scoring position in the seventh and eighth but nothing came of it. In the eighth, Williams walked a batter and hit another to put two on with two outs. Forsythe, on the 10th pitch of the at-bat, lined to Jordy Mercer at short for the third out. “I thought that was going to get through Mercer’s glove. Unfortunately, we just couldn’t push that one across,” Forsythe said.3

The left-handed Hill had earned his ninth win five days earlier against the Tigers when he pitched five innings while giving up three runs in the Dodgers’ 8-5 victory.

Hill struck out the first two batters he faced in the first before getting Andrew McCutchen to fly out to end the frame. In the second, Josh Bell hit a groundball down the first-base line. Hill took the throw from Gonzalez, but Bell was called safe. Roberts, however, challenged the call, and it was overturned after replay review.

Hill settled into his masterpiece after that close call. The Pirates didn’t get the ball out of the infield after David Freese’s fly ball in the fifth. By the seventh, Hill had notched his ninth strikeout, fanning Josh Harrison for the inning’s second out. McCutchen—who had finished in the top five of the National League MVP voting every year from 2012 through 2015, winning the award in 2013—followed with a groundout. Hill had set down the first 21 batters.

After Mercer’s grab of Forsythe’s liner kept the game scoreless through 7½ innings, it took Hill 14 pitches to retire the Pirates in the eighth. He was helped when Chase Utley made a diving catch of Bell’s line dive to prevent a single.

After getting Freese to fly out, Hill faced another threat to his run of perfection. With the count full, he threw a fastball to Sean Rodriguez. The pitch crossed the plate at his knees. Rodriguez pivoted and prepared to jog to first base, in apparent anticipation of a walk, but home-plate umpire Brian O’Nora called it strike three to end the frame.

Felipe Vazquez replaced Williams in the ninth and continued to shut out the Dodgers, leaving Hill without a run just three outs from nine perfect innings.

Less than a year earlier, on September 10, 2016, Hill had retired the first 21 Marlins he faced, but Roberts pulled him after seven innings over concern about a blister on his pitching hand.4

This time his perfect game ended with the first batter in the ninth. Mercer hit a hard groundball to third base. Forsythe couldn’t handle the ball, and it bounced off his chest. Mercer was safe on the error. Hill shook it off, saying later, “I just felt for him.”5

Hill made short work of the next three Pirates batters, getting all of them to ground out to keep his no-hitter intact.

Juan Nicasio pitched a perfect 10th and now the Dodgers needed to make a decision. Would Hill continue to pitch? Roberts said he looked at Hill’s pitch count—which was just 95—and decided to send him back out. “He felt good, felt strong,” Roberts said afterward. “It was more of where he was at with the pitch count.”6 The decision meant that Hill became the first pitcher since Pedro Martinez on June 3, 1995 to carry a no-hitter into extra innings.

The first batter Hill faced in the 10th inning was Harrison, who had gone 0-for-3 so far, striking out twice. With the count 2-and-1, the 30-year-old right-handed-hitting utilityman—in 2017 an All-Star for the second time in his career—drove Hill’s fastball to left field. The ball eluded the glove of Dodgers left fielder Curtis Granderson and landed in the second row of the stands for a walk-off home run.

Hill’s 1-0 loss was the first time a pitcher had lost a scoreless no-hitter on a home run. The game was Hill’s first complete game in 11 years. He also lost that game, a rain-shortened five-inning 4-2 Cubs loss to the Cincinnati Reds on September 22, 2006.7

“It falls on me, this one. One bad pitch,” Hill said after the game. “Late in the game like that, you need to make better pitches.”8 After the ball cleared the wall, Hill quietly walked off the field and into the clubhouse. Harrison told reporters afterward, “I wasn’t looking to make history. I just wanted to go home.”9

The loss reminded Pirates fans of Harvey Haddix, a Pittsburgh pitcher who pitched a perfect game into extra innings. Haddix pitched 12 perfect innings against the Milwaukee Braves on May 26, 1959, but lost the game in the 13th on an error, an intentional walk, and a double.10

Roberts said he was disappointed that Hill walked away with a loss. “With us this year, we obviously find a lot of ways to win,” Roberts said. “But tonight we found a different way to lose.”11 His teammates were also disappointed that they could not come through for their starter. Barnes, perhaps thinking of the 11 runners left on base by the Dodgers, said, “He threw a hell of a game. It hurts.”12

Hill lost his next three games before he finally rebounded to win three straight and end the season with a 12-8 record, as Los Angeles won its first pennant since 1988 before losing the World Series to the Houston Astros. He remained a starter for the Dodgers through 2019, finishing with a 30-16 record and a 3.16 ERA during his time in Los Angeles.

Although Hill resurrected his career during his four years in Los Angeles, he will probably best be remembered for a game that “almost was”: the night in Pittsburgh when he became the 14th pitcher in major-league history whose nine hitless innings were not enough for a win.14

1 Hill did pitch a total of 99 innings, split between the Triple-A Memphis Redbirds and Pawtucket Red Sox, in 2010.

4 The Dodgers were leading 5-0 at the time Hill left the game. Three Dodgers relievers pitched the final two innings and kept the Marlins from scoring to secure the win for Hill.

5 Dave Sheinin, “From a Perfect Game to a No-hitter to a Loss, the Dodgers’ Rich Hill Makes Painful History,” Washington Post, August 24, 2017.

7 Hill was credited with a complete game despite pitching just five innings. The game was called at the end of the fifth inning because of rain.

10 Haddix lost the game by one run because of baserunning errors by the Braves. The Braves finally got a baserunner in the 13th when Felix Mantilla reached on an error by third baseman Don Hoak. Eddie Mathews followed with a sacrifice. Haddix then walked Hank Aaron intentionally to set up a possible double play. The next batter, Joe Adcock, hit a ball over the wall in right-center field. Aaron, thinking the game was over, stopped running and headed for the dugout. Adcock passed him on the bases. Aaron eventually went to third but was ruled out and Adcock was credited with a double, not a home run. Mantilla’s run, the only run that mattered, still counted, giving Milwaukee a 1-0 victory.

14 In 2021 SABR recognized baseball’s 50 greatest games of the previous 50 years, as part of the 50 at 50 celebration of the organization’s semicentennial. The list included this game as part of that collection. All of the games can be viewed in the “SABR 50 at 50: Greatest Games” collection, available at https://sabr.org/50at50/games.