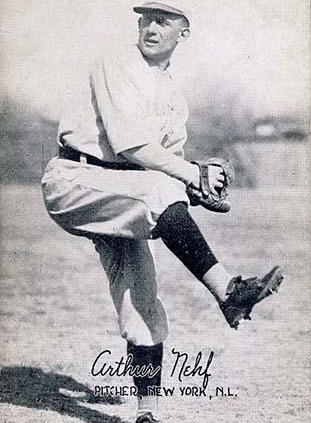 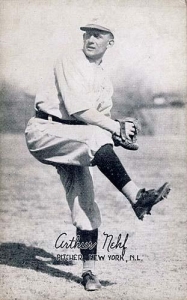 The New York Giants and manager John J. McGraw entered the 1921 season with high expectations. While they had finished second in the NL the previous three years, McGraw felt this team was poised to win both the pennant and the World Series. They were led by outfielders Ross Youngs and  George Burns, second baseman Frankie Frisch, shortstop Dave Bancroft, and first baseman George “High Pockets” Kelly.  The pitching staff had been bolstered by the acquisition of Art Nehf and Jesse Barnes from the Boston Braves and Phil Douglas from the Chicago Cubs in trades and the purchase of Fred Toney from the Cincinnati Reds.

While many agreed with McGraw that the Giants should be favored, the Pittsburgh Pirates under manager George Gibson were expected, along with the Brooklyn Robins, to be formidable opponents. Pittsburgh had finished fourth in 1920 but McGraw viewed them to be the major challenger, especially after their January 1921 acquisition of Rabbit Maranville from the Boston Braves to  play shortstop.1 In addition to Maranville, the Pirates were led by outfielders Max Carey and Carson Bigbee while Wilbur Cooper and Babe Adams anchored the pitching staff.

The Giants got off to a good start to the season, winning 27 of their first 41 games in April and May. But the Pirates did even better early on, with 29 wins in their first 39 games to take a three-game lead over the Giants as June began. The Giants had a topsy-turvy June, winning 13 of 25. The Pirates did slightly better, winning 17 and losing 12. As June ended, Pittsburgh had a five-game lead over the Giants.

McGraw realized the need to address certain weaknesses and made two trades with Philadelphia in July. The first deal brought second baseman Johnny Rawlings and outfielder Casey Stengel in a five-player trade. With Rawlings at second, Frisch could move to third. Later in July, New York acquired rising star outfielder Irish Meusel. The trade for Meusel appeared so one-sided that it elicited complaints from Pittsburgh and other teams requesting Commissioner Landis to intercede. Landis allowed the deal but later admitted that he should have acted.2

With these two acquisitions, the Giants were able to make up some ground and found themselves tied with Pittsburgh on the evening of July 30. The Pirates then pulled ahead once again as New York lost 15 of its next 26 games.

As Pittsburgh came to New York on August 24 for a five-game series beginning with a doubleheader, the Pirates were 7½ games in front of the Giants with a nine-game advantage in the loss column. With little more than a month to go in the season, New York’s title hopes depended on making up ground through head-to-head wins over Pittsburgh.

To motivate the Giants for this crucial series, McGraw called a clubhouse meeting the night before the opening doubleheader and launched into a verbal tirade. He started by stating that they could have been one of the greatest squads of all time, but were now on the verge of being one of the worst. He reminded the players that he predicted the rise of the Yankees a few years before and that that a Giants-Yankees World Series would be one of the great showdowns of the century. But his bums had blown it.

The Pirates, seeking their first pennant since their 1909 world championship season, were a confident bunch when they arrived in New York. whenEarlier in the season, Barney Dreyfuss, the team’s owner, had extra grandstands and bleachers added at Forbes Field, Pittsburgh’s home ballpark, in preparation for the World Series. To further illustrate their confidence, Gibson ordered his players to assemble before the first game of the doubleheader to have a team picture taken for the anticipated World Series program. Pirates first baseman Charlie Grimm was also seen sitting in the Pittsburgh dugout strumming his ukulele.4

In the opener of the doubleheader, Nehf was called upon to start for the Giants and Adams for the Pirates. Pittsburgh struck first as Maranville opened the game with a line-drive double off Frisch’s glove at third, went to third on a groundout, and scored on a fly ball to left by Carey.5 The Giants did not score in the bottom of the first and neither did the Pirates in the top of the second.

The Giants went ahead in the second. High Pockets Kelly doubled with one out. Irish Meusel followed with a two-run home run to right field, giving the Giants a 2-1 lead. It was Meusel’s 13th home run of the season and his first as a Giant.

The Pirates went out in order in the top of third. Burns led off the bottom half with a single to center field. He reached third base on two groundouts but was left there as Youngs ended the inning by flying out to right field. In the top of the fourth, Nehf walked the Pirates left fielder, Carson Bigbee, to begin the inning. Bigbee was stranded at first as Nehf retired the next three batters.

The Giants added to their lead in the bottom of the fourth. Meusel doubled with one out and scored on a single by catcher Earl Smith, increasing the lead to 3-1. The Pirates responded with a run in the fifth. Possum Whitted led off the inning with a single. Grimm’s batted ball struck Whitted, who was an automatic out. Adams then doubled home Grimm, making it a one-run game once again.

The Giants increased their lead in the bottom of the sixth. With one out Kelly hit his 22nd home run of the season. Meusel then reached first on an error by second baseman Cotton Tierney and Rawlings followed with a single, moving Meusel to third. Smith knocked in Meusel with another single, giving the Giants a 5-2 lead.

Nehf held Pittsburgh scoreless in the seventh. New York extended its lead to 6-2 in the bottom of the inning as Youngs doubled with two out and scored on a single by Kelly.

In the top of the eighth, Nehf put up another scoreless inning. Since the Pirates had pinch-hit for Adams, rookie Whitey Glazner, a dependable member of Pittsburgh’s rotation since May, came in to pitch in the bottom of the inning. A day earlier, Glazner had started against the Boston Braves but was chased from the mound after three innings in a 4-3 Pittsburgh loss.

Meusel walked to lead off the Giants eighth and Rawlings singled. Smith flied out. So did Nehf but on his fly to deep right, Meusel took third. With George Burns at bat, Meusel and Rawlings pulled off a double steal, with Meusel stealing home and Rawlings going to second base. Glazer then walked Burns and Bancroft, loading the bases. Frisch singled in two runs and then a single by Youngs scored Bancroft. Kelly’s groundout ended the inning with the Giants now leading 10-2.

Nehf retired the Pirates in order in the ninth. The Giants had won the first game of the doubleheader before an estimated 35,000 fans.6

Nehf tossed a five-hitter to earn his fifth victory of the season against the Pirates. Babe Adams took the loss, ending his nine-game winning streak. The hitting stars for the Giants were High Pockets Kelly, who went 3-for-5 with a home run, and Irish Meusel, who had two hits, including a home run, and scored four runs, including that steal of home. Quite a game for the ex-Phillie.

As the second game was to begin, the Pirates’ lead stood at 6½ games. The Giants were able to further reduce the margin to 5½ games as Phil Douglas shut out the Pirates 7-0. Meusel got another three hits.

After the doubleheader sweep, McGraw told his team, “I told you fellows last night you didn’t have a chance. Well I was wrong. You have a chance, a bare chance.”7 He then left the clubhouse. Years later, Kelly said, “It’s a good thing he got out then or he might have been skulled by a shower of bats.”8

The Lyle Spatz and Steven Steinberg book 1921: The Yankees, the Giants, and the Battle for Baseball Supremacy in New York (Lincoln: University of Nebraska Press, 2012) was invaluable in providing a chronology of the Giants’ 1921 season. The author additionally relied on the following game accounts from Baseball-Reference.com and Retrosheet.org:

The author wishes to also thank John Fredland for his excellent suggestions to improve the readability of the essay, Kevin Larkin for his fact-checking, and Len Levin for his copy-editing.

1  Lyle Spatz and Steve Steinberg, 1921 The Yankees, the Giants, and the Battle for Baseball Supremacy in New York, (Lincoln: University of Nebraska Press, 2012), 48.